It has been a long two years for the scientists at the United Kingdom-based Kew Gardens. Since the start of the Covid-19 pandemic, researchers who normally come to the territory …

END_OF_DOCUMENT_TOKEN_TO_BE_REPLACED 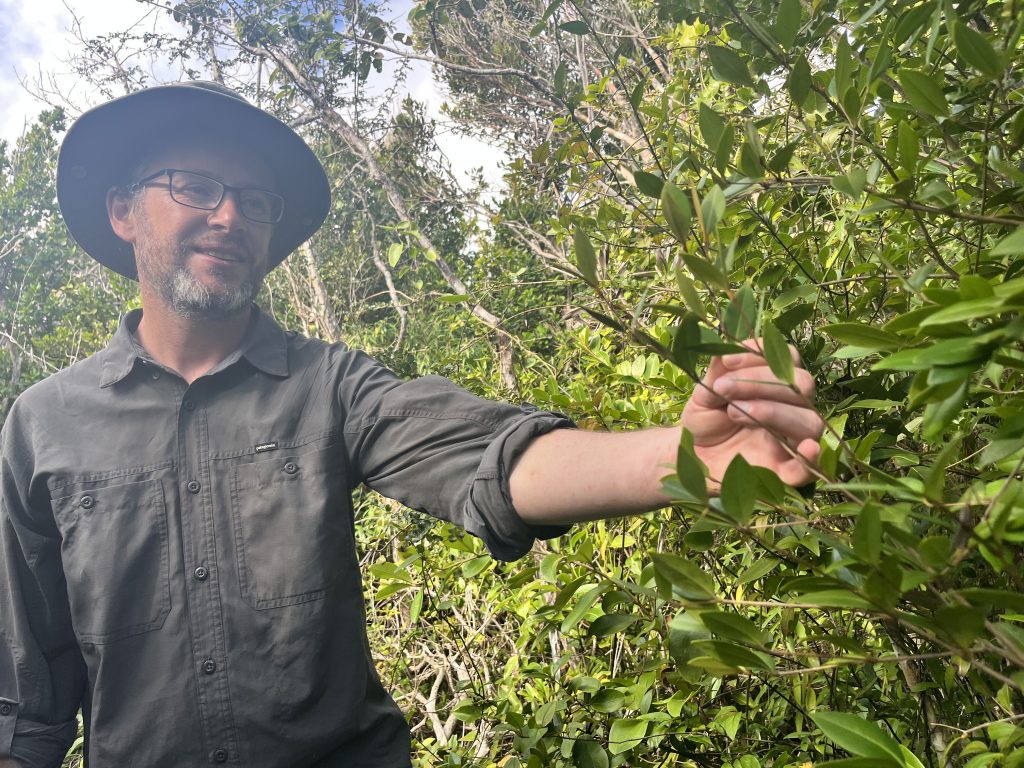 Dr. Tom Heller, a botanist from Kew Gardens, explains the project that he and others are undertaking in the Virgin Islands during a field day at Gorda Peak National Park in late January. (Photo: ZARRIN TASNIM AHMED)

It has been a long two years for the scientists at the United Kingdom-based Kew Gardens.

Since the start of the Covid-19 pandemic, researchers who normally come to the territory to conduct research haven’t been able to travel anywhere.

But in late January, several scientists came back to the territory, immersing themselves in the flora on several islands to understand how some endangered species are surviving — and even thriving — in certain areas.

The scientists are working alongside the National Parks Trust and Fort Worth Zoo to study five threatened plant species and two animal species — the Anegada rock iguana and a rare skink — through a project funded by the United Kingdom’s Darwin Plus Initiative.

“What’s new about this project is, following hurricanes Irma and Maria, I think people got a good sense of how important forests are in terms of resources like water management and protecting us from natural disasters like hurricanes,” Kew botanist Dr. Tom Heller said while hiking through Gorda Peak National Park on Jan. 28. “What we’re interested in is where there’s that overlap between forests being important for us and being important for providing a habitat for protected species.”

According to Dr. Heller, there are 37 known species of plants and animals that risk extinction in the VI.

“This particular one is critically endangered,” he said while pointing out a Myrcia neothamasiana, a bushy plant with small leaves. “It stands a high chance of going extinct.”

“What we’ll do this morning are habitat surveys: We’re going to be doing lists where we can build up a picture of patterns of vegetation and how they’re related to where these threatened species fall,” Dr. Heller said.

The scientists were also studying plant genetics, pollinators, and whether threats to the species are isolated or widespread.

Ms. Barrios said that if a plant is not doing well in several different locations, there may be a disease that is affecting it. Dr. Viruel said that studying the different pollinators could help scientists understand why some populations are thriving.

While the scientists have been tracking the endangered plants for the past 20 years under a different project, they’ve also gathered snapshots of where in the islands they occur.

They do this by identifying an endangered species, whether by coming across it during an expedition or returning to a GPS-mapped location, and taking a field survey of all the plants that surround it.

The scientists headed up Gorda Peak trail that day, found a GPS-mapped location where Dr. Heller picked up a tracker that had been collecting rainfall information since before the pandemic, and began logging the plants in the area.

The group took photos of each plant species surrounding the endangered plant. By the end of their survey, they recorded nearly three dozen different trees in the area.

The scientists are still finding species they didn’t expect: They found a new plant — Eugenia earhartii — that hasn’t been identified in the VI before. They spotted the plant just below the main road in Virgin Gorda the day before the Gorda Peak hike.

“It’s in a good position because it’s within a national park here,” Dr. Clubbe said.

The national forests are maintained by the NPT.

“The important thing about this collaboration is that the custodians of the forest, i.e. the National Parks Trust, are all great field botanists,” said Dr. Heller. “That’s why we say the plants are in a good place. De- spite their small populations, they’re well-known, they’re documented. The trust is aware and regularly monitors these sites to make sure the health of them is being maintained.”

The group was using WhatsApp to ask colleagues in Puerto Rico about certain plants, and answers came right away.

Since the plants come from the same geographic region — the Puerto Rican Bank — the scientists there are more familiar with some of the plants that are also found in Puerto Rico.

“We’ve got various equipment deployed in the field,” Dr. Heller said while retrieving two sensors in Gorda Peak. “We’ve got temperature and humidity sensors that are monitoring over the course of years. We can look at fluctuating patterns of temperatures.”

Dr. Heller pulled out his laptop and downloaded the recorded data on the spot. The data points included rainfall and temperatures every hour of the day taken for nearly two years.

The scientists stayed in the territory for about two weeks before flying out. They surveyed areas on Anegada, Virgin Gorda and Tortola during their time.