“Go shake his hand,” Dr. Mitchell Penn told his son Myles after the 7-year-old won a race at the 2017 CIL Soapbox Derby on Sunday afternoon. Myles, who quickly followed …

END_OF_DOCUMENT_TOKEN_TO_BE_REPLACED 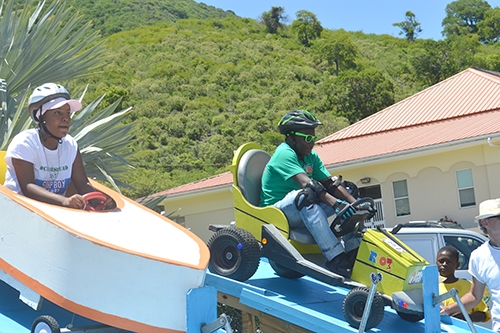 More than 20 children between ages 7 and 16 competed in the 2017 Soapbox Derby on Sunday at H. Lavity Stoutt Community College. Photo: YANIKA HODGE

“Go shake his hand,” Dr. Mitchell Penn told his son Myles after the 7-year-old won a race at the 2017 CIL Soapbox Derby on Sunday afternoon.

Myles, who quickly followed his father’s advice, was among more than 20 children between the ages of 7 and 16 who raced soapbox cars from the top of a wooden ramp set up in front of H. Lavity Stoutt Community College.

His cart started out as a bike, but with the help of his bigbrother Maat and other family members it became something more.

“My grandfather and I took apart the pedals before the race,” Maat explained. “Then my cousin came and we cut open one of those emergency traffic cones and painted it black to cover it. After the trial runs, we saw that the aerodynamics weren’t working, so we took off the cover.”

That didn’t seem to hurt Myles’ chances: He won several races, including one against a car sponsored by the BVI Health Services Authority.

“It was tiring and took a lot of hard work,” he said. “It was a lot of screwing and sawing.”

The event, which was presented by Caribbean Insurers Limited and the BVI Motorsports Association, raised funds for the BVI HIV/AIDS Foundation and the BVI Cancer Society.