Sports > Kite Jam comes to a close on Necker Island

Kite Jam comes to a close on Necker Island

Sir Richard Branson didn’t get a chance to participate in this year’s Kite Jam, but his broken leg didn’t stop him from attending the closing party, which he hosted on …

END_OF_DOCUMENT_TOKEN_TO_BE_REPLACED 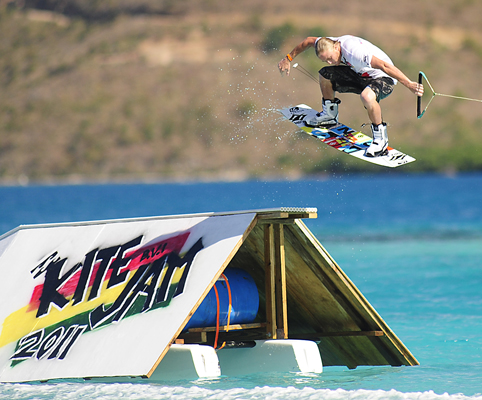 Professional kiteboarder Davey Blair does a trick on Friday. Due to not enough wind, riders took part in a wakeboardering event near Eustatia Island. (Photo: TODD VANSICKLE)

Sir Richard Branson didn’t get a chance to participate in this year’s Kite Jam, but his broken leg didn’t stop him from attending the closing party, which he hosted on his private island Friday evening.

As a fleet of charter boats arrived with kiteboarders for the award ceremony and closing party at Necker Island, Sir Richard sat in a Balinese-style lodge flipping through several large photographs of last year’s event, which included aerial shots of kiteboarders in Anegada and himself.

“The photographer sent these to me to sign, but I just haven’t got around to it,” Sir Richard said.

Due to a skiing accident in Switzerland, he was unable to kiteboard this year.

The event was conceived two years ago when Sir Richard kite-surfed from Anegada to Necker Island. Afterwards, while sitting at the bar with Charlie Smith, Abigail O’Neal and Stephen “Scotty” Wilson — now event owners and organisers — he came up with the idea of Kite Jam.  Sir Richard doesn’t own the event, but he does take credit for the idea.

“It is the best place in the world for kite-surfing and it happens to be my favourite sport as well,” Sir Richard said. “The three of them said they would like to take it on and make it happen. So I have the pleasure of letting them do the hard work and I get to enjoy it.”

A total of 55 riders competed in the event this year, including 12 professionals.

“We have some the best riders in the world here,” Mr. Wilson said. “The rest are amateurs of all abilities — novice up to advanced.”