Governor John Rankin on Oct. 4 published his first quarterly report on the ongoing reforms recommended by the Commission of Inquiry, guardedly praising the overall progress while also noting a …

END_OF_DOCUMENT_TOKEN_TO_BE_REPLACED 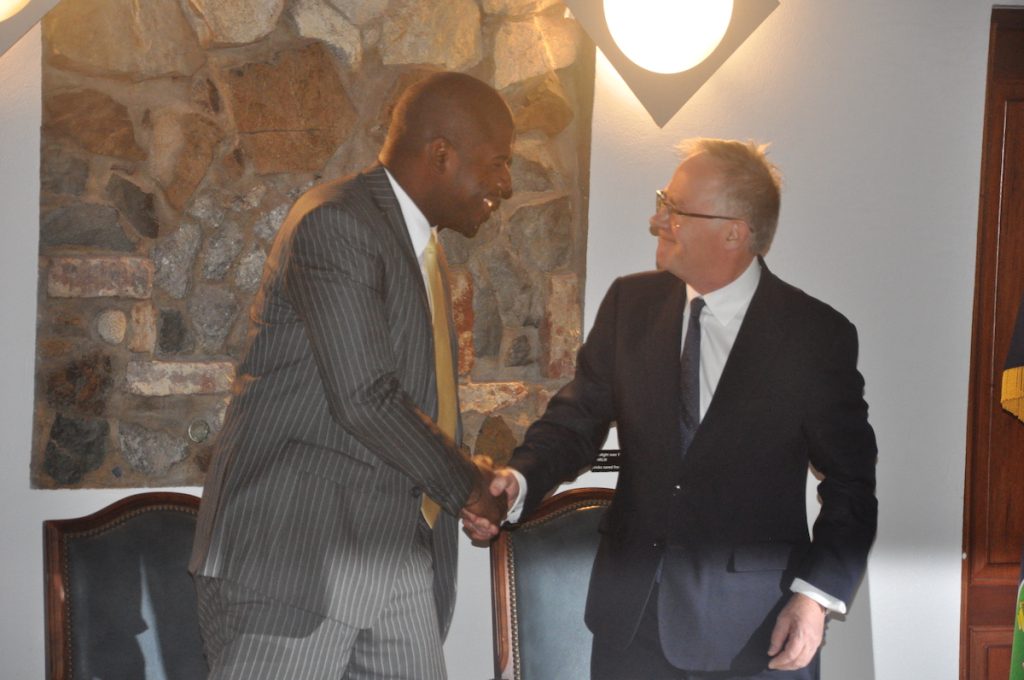 Premier Dr. Natalio “Sowande” Wheatley and Governor John Rankin shake hands during the May swearing-in of the National Unity Government that later pledged to carry out most of the recommendations included in the Commission of Inquiry report. The governor released the first of his quarterly reviews of the reform progress on Oct. 4. (File photo: FREEMAN ROGERS)

Governor John Rankin on Oct. 4 published his first quarterly report on the ongoing reforms recommended by the Commission of Inquiry, guardedly praising the overall progress while also noting a “number of areas of concern” with the pace of the reforms since June.

“There has been good progress in some areas to date, and I am pleased with the overall constructive engagement and partnership I have had with the premier and Cabinet,” Mr. Rankin wrote in a on Oct. 4 statement.

He added that most reform deadlines have been met so far, and that legitimate reasons have been offered for any delays. However, he also expressed disappointment with other areas.

“In the quarterly review I note a number of areas of concern where there has been less progress than expected, and where I have been disappointed with the level of commitment to reform,” he stated.

The governor’s quarterly reviews are a key yardstick measuring progress with the 48 COI recommendations that the National Unity Government committed to carry out in the reform framework agreed with the United Kingdom in June.

If the NUG completes the reforms as promised, the UK has stated that it will forgo a COI recommendation to suspend the legislature and implement direct rule for at least two years. But if progress stalls, the UK may move ahead with direct rule instead.

“This review has been sent to ministers in the UK for consideration and I will hold a press conference once I have received their response to it,” Mr. Rankin said on Oct. 4.

In the review, the governor noted three main concerns about the reform progress so far.

One involves tender waivers, a historically common Cabinet practice that auditors have said for decades prevents government from getting good value for taxpayers’ money.

The reform framework commits Cabinet to ensuring that the waivers “are only agreed in exceptional, unavoidable cases, and which must be explained publicly.”

However, the governor found that this commitment and related reforms including a new Public Procurement Act have not produced the promised results.

He added that he has referred several such contracts for further audit investigation.

The governor also noted House of Assembly members’ delayed progress towards their promise to make the Register of Interests public.

A version of the Register of Interests Act, 2022 introduced in the HOA in July would have published the register as promised. However, before passing the bill, HOA members went into a closed-door committee session and made changes that the governor said “severely restrict public access” to the register by requiring written applications and fees.

“In my view, these amendments are contrary to the principle of transparency,” he wrote, adding that the move is also contrary to the framework’s intent to make the register public.

The final version of the bill passed by the HOA has not been made public.

Thirdly, the governor also complained about pushback over nominations for the Constitutional Review Commission, which he said “ran contrary to the importance of the commission being representative of the BVI as a whole.”

“The overarching aim of the COI and this reform programme is to improve governance, accountability and transparency for the benefit of all of the people in the British Virgin Islands,” Mr. Rankin said. “It is essential that the areas of concern I have outlined are addressed and that new governance issues do not arise.”

Premier Dr. Natalio “Sowande” Wheatley said in a July 1 press conference that CRC candidates traditionally have been chosen only by elected officials, but the governor provided three nominees this year as part of the COI reform plan. However, critics took issue with the governor’s involvement and raised personal issues with two of his nominees.

In his report this week, Mr. Rankin also acknowledged the challenging scale and demanding deadlines of the reform process so far.

“Early progress in key areas is important for establishing the pace and direction of change,” he wrote. “Reform must be deep-rooted and sustained to ensure improvements in governance in the interests of the people of the BVI.”

He noted progress on legislative items and said leaders have so far initiated all but two COI-recommended reviews.

He added, however, that some deadlines have been missed, including a June 30 deadline to start a wholesale review of assistance grants; a July 1 deadline to publish a protocol for the appointment and removal of statutory board members; various deadlines for the appointments of certain reviewers; and a July 31 deadline to start a review of the law enforcement and justice systems and powers for prosecution. He acknowledged that the last item falls under his purview.

The House of Assembly also has yet to approve additional resources to publish the territory’s laws in full, he said.

Another COI recommendation was to vet all serving customs and immigration officers, and potentially members of the Royal Virgin Islands Police Force and the Prison Service. Security is a constitutional responsibility of the Governor’s Office. Mr. Rankin said a UK National Police Vetting Team was appointed before the July 31 deadline included in the framework and has since made two trips to the VI.

Until the VI government establishes a permanent vetting system, the UK has agreed to pay the work costs, he said.

His office, however, missed the deadline to review how law enforcement and the judicial system detect crime and prepare for prosecution, Mr. Rankin acknowledged.

“This was due to the complexity of the review and the need to secure a panel with the expertise to ensure a professional, independent review,” he said. “However, I am pleased that His Majesty’s Inspectorate of Constabulary and Fire and Rescue Services has agreed to lead the review, which the UK government has agreed to fund.”

He also expressed his appreciation for a recent UNICEF pledge to assist with a review of assistance grants.

“These are examples of where the delay in starting the reviews was justified to ensure we found the right reviewers through the right processes,” he said.

Recent improvements have also been made at the prison to address security concerns, he said.

Though he said delays in appointing some reviewers have delayed important work, the governor expressed hope that the recent formation of the COI Implementation Unit will speed progress in this regard.

“I trust that with the establishment of the Implementation Unit, and full cooperation from ministers and the public service, the reviewers will from now on receive the support necessary to complete their work,” he wrote, promising to closely monitor their progress.

The Implementation Unit, which is headed by Hadassah Ward and reports to the Premier’s Office permanent secretary, was established to help coordinate the ongoing reforms.

Under the reform framework, the unit should have been established by July 15, but Mr. Rankin said issues with securing staff meant that Ms. Ward wasn’t appointed until September.

However, he added, the unit is now functioning and should help with supporting key reviews and making sure ministries submit monthly reports on time.

Without going into detail about open investigations, the governor said early reports to him show a generally satisfactory level of cooperation with officials.

“However, I note with concern that several reviewers and investigators have reported difficulty accessing relevant documents from the public service,” he wrote. “I have asked the deputy governor to remind public servants of the need to prioritise cooperation with COI implementation. If there is evidence that access is being deliberately blocked, action will be taken in respect of the relevant officers. I trust that this will no longer be a concern by the time of my next quarterly review.”