On Monday in the House of Assembly, opposition member Julian Fraser took aim at the recent Ministry of Natural Resources, Labour and Immigration policy of requiring holders of work permits …

END_OF_DOCUMENT_TOKEN_TO_BE_REPLACED 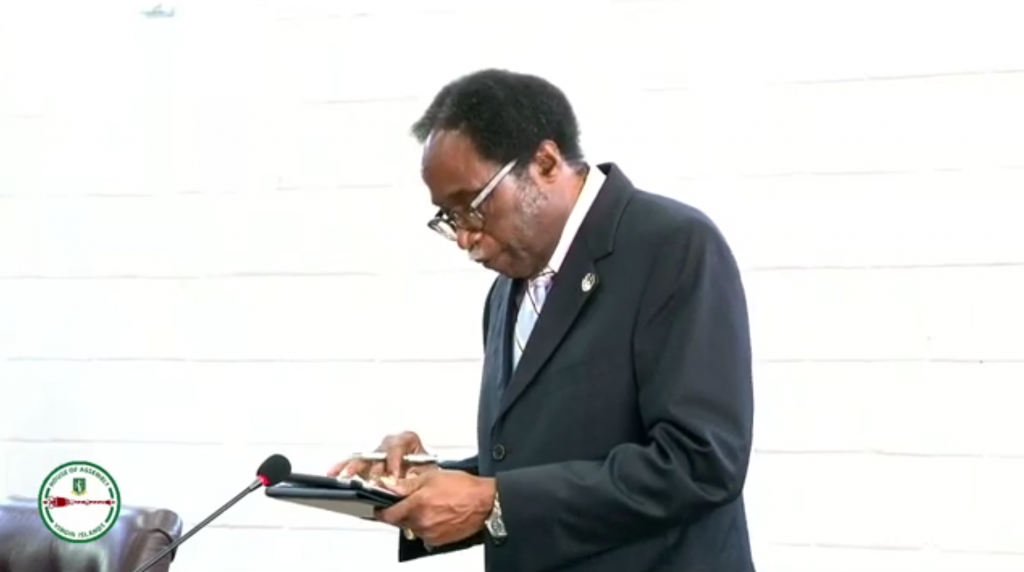 On Monday in the House of Assembly, opposition member Julian Fraser took aim at the recent Ministry of Natural Resources, Labour and Immigration policy of requiring holders of work permits to get letters of good standing from three government agencies in order to renew their employment.

He called the process “onerous,” and suggested that it is redundant to ask employees to get certificates for both employers and themselves and that the requirement punishes employees unfairly if their employers have been negligent in their payments.

But Mr. Wheatley responded that there were good reasons for the policy.

Mr. Wheatley replied that the system is designed both to collect revenue and expose “flaws” in the collection system. “This policy helps ensure that both entities are in compliance, submitting the government
mandated payments to the delegated agencies, which helps generate revenue to pay the government expenditures,” he said. “The policy also helps to ascertain that employers and employees fulfill their legal and
moral obligations, many of whom were not compliant.”

Employees, he argued, are not in fact being held responsible for the employers’ negligence as employers can submit their good standing certificates on behalf of the organisation directly to the Department of Labour and Workforce Development, or submit payment plans if necessary.

However, Mr. Fraser countered, “What I am seeing is that the employees are the ones who have to take these good standing certificates to the Labour Department.”

He added that employees should be able to go to Inland Revenue, for example, and get a box checked that says the employer is in good standing themselves.

However, Mr. Wheatley said the process is about more than simply checking a box.

“What we’re trying to do today is to ensure that employees who are applying for permits have legitimate work,” he said.

“We have discovered, Mr. Speaker, there are several cases of persons in the territory working off the grid, so to speak. A gentleman comes in and says he wants to hire these 10 persons. You go to the workplace to realise not a single one of those persons actually worked with
that employer.”

Such problems are not new, he said, but “with Covid, now our finances are in trouble. We need every penny we can get.”

Mr. Fraser then asked the minister whether he made an arrangement with the three agencies to expedite the issuing of these certificates and what the cost is.

Mr. Wheatley replied that since the issue of certificates is not new and is done on a regular basis, it does not normally take very long.

“However, the last volume at the outset did cause some delays,” he said. He warned workers not to wait until their permits expire and to apply for renewals one month in advance.

Mr. Fraser replied he understood the objective of the process, but nevertheless found it “onerous and inconvenient and expensive.”

“If I go to a government agency and I make a payment, whatever that is I’m settling, that agency is supposed to give me a receipt, indicating that I’ve paid my debt and what the debt was. If that is so, Mr. Speaker, why
shouldn’t that be sufficient for me to take to another government agency to indicate that my debt has been settled and what my debt was?”

Mr. Wheatley agreed that the process was flawed and cumbersome, but said improvements have begun already.

“It wastes time, it wastes energy, it makes a system incredibly inefficient, but the commission has already started this whole transformation process of government services. So hopefully sooner rather than later,” he said.

Mr. Fraser thanked him but urged him to hold to his promise.

“I hope it’s sooner because, according to my calculations, you got six months left,” he said. “And after that six months, you’re going into a different mode where nothing gets done. So you got to work on this thing, like, yesterday.”

The minister also said last Thursday that the $1 million allotted to revamp the NHI system is still in the early stages and a request for expressions of interest has gone out.

“The intention is to undertake a comprehensive review of the NHI system and come up with recommendations for improvement, viability and sustainability. So a work in progress,” he said in response to a question from Opposition Leader Marlon Penn.

Mr. Penn asked, “Is there any timeline in terms of pushing this particular matter forward? There’s been almost no, I think six, seven months since that money was allocated.”

Mr. Wheatley responded that his personal timeline for completion was “last week.”

“NHI is incredibly important,” he added. “It’s not working as it should and my target is to get it fixed in as short a time as  possible. That I promise you.”

In response to another question from Mr. Penn, Mr. Wheatley said 413 people were suspended from NHI due to unemployment since the pandemic began. Of those, 75 registered as voluntary, and the rest were
given extensions by the ministry to remain in the territory without NHI.

“Now that the territory is being reopened, these persons will be employed and payments  made to NHI on their behalf,” he said. “We will reactivate their benefits as soon as they start working and start paying.”

Given that work permit exemptions were suspended earlier this year while the programme was revamped, Mr. Penn asked how many applicants have been left in limbo.

He added that these included 24 marriage, 63 residing, 22 “minister’s discretion,” and 22 “status from immigration” applications.

But Mr. Penn expressed concern for those married to belongers who may be forced to continue paying work permit fees while waiting to be
granted an exemption, which he said could take “two or three years.”

However, Mr. Wheatley disagreed with that characterisation. “Let me make it clear that an exemption is not a status. It is not something that is a right, so to speak. It’s not a standard belongership or residency.”

Thus, he said, “a timeline is not necessarily applicable here.” Additionally, he promised, “No one’s been waiting for three years. I can assure you they will be expedited in short order.”

In response to Mr. Penn’s next question, Mr. Wheatley  added that since February 2019, 509 work permit exemption applications have been processed, including 341 residing, 118 marriage, and 40 “minister’s discretion.”