Government has tried to be flexible as residents have navigated the challenges of living and working amid the Covid-19 pandemic, from uncertain job prospects to difficulties securing flights to home …

END_OF_DOCUMENT_TOKEN_TO_BE_REPLACED 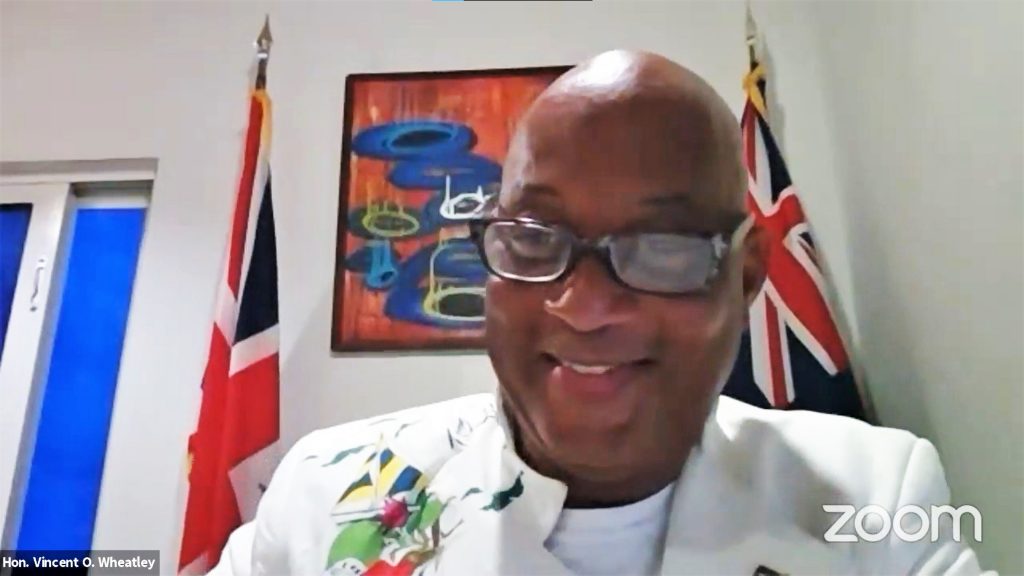 Natural Resources, Labour and Immigration Minister Vincent Wheatley said on Sept. 13 during a Facebook livestream that his ministry would temporarily suspend some of the new requirements for renewing work permits. (Screenshot: FACEBOOK)

Government has tried to be flexible as residents have navigated the challenges of living and working amid the Covid-19 pandemic, from uncertain job prospects to difficulties securing flights to home countries, Natural Resources, Labour and Immigration Minister Vincent Wheatley said during a Facebook livestream on Sept. 13.

But the ministry will soon be cracking down on illegal work as it tries to get a better picture of the post-pandemic workforce, he warned.

“Effectively managing our borders and the workforce is key to the future of any nation,” Mr. Wheatley said. “I must hasten to say we do not have all of the answers.”

The minister pledged to regularly host such forums to get residents’ input and answer questions about the future of the VI workforce.

Labour Commissioner Janice Rymer also spoke, explaining that the Department of Labour and Workforce Development has been finding new ways to work around the coronavirus. The Labour Relations Unit, for instance, is using Zoom and phone calls to address an increase in workplace disputes that have arisen during the pandemic, she said.

She added that people will soon be able to complete the work permit process online, though she didn’t offer an anticipated launch date.

“Presently we are processing changes of employer as well as changes of position,” Ms. Rymer said. “If BVIslanders are registered in the pool, we are recommending they be interviewed first.”

She said, “As the borders reopen, we will continue our commitment to doing what is necessary in terms of the mandates set by government.”

Chief Immigration Officer Ian Penn said the Immigration Department is currently processing expatriates who have lost their jobs, determining if they are eligible to remain in the territory and seek other work under a conditional permit.

The department is seeing people by appointment only for now, he said.

“We can understand that lots of businesses are actually being impacted by Covid-19,” Mr. Davis said. “The persons on Jost Van Dyke, Anegada and all the outer islands, we’re actually trying our best to reach out to them as well, especially the employers who have to lay off these employees because of the situation we’re currently facing.”

Ms. Rymer said the department is still in the process of gathering comprehensive information about how many businesses have shut down since the pandemic’s onset and how many employees have been laid off. Mr. Wheatley said unemployment figures would be made public soon.

Officials did not say how many businesses have reported layoffs so far, but in June Mr. Wheatley reported that the 337 businesses that responded to a survey reported that 4,259 jobs had been affected by the pandemic through pay cuts, reduced hours, layoffs or terminations.

Of those, 767 people had been laid off — apparently on the “temporary” basis allowed under government’s interpretation of the 2010 Labour Code — and 165 were terminated.

By July, 6,650 people had applied for financial aid designated for unemployed and underemployed residents.

Government recently enacted new requirements for work permit renewals, which generated questions from people tuning in who were concerned about renewing their paperwork in time.

Mr. Wheatley announced on July 10 that businesses would have to present letters of good standing with the Social Security Board, Inland Revenue Department and National Health Insurance, as well as certificates of earnings from SSB and IRD, for any employee seeking to renew their permit.

Listeners on Sept. 13 asked what they should do if they couldn’t get the letters from their employers.

The minister admitted that the system for distributing letters of good standing had hit some snags, creating a backlog of pending permit renewals.

Based on conversations with leaders in government and business, Mr. Wheatley said they decided to relax the new requirement for the time being “against better judgement.”

“Companies should not be allowed to function without these things being up to date, or a proper payment plan,” he said.

He added that the government is not looking to add additional burdens to businesses, but only to ensure that business is done properly.

Ms. Rymer said the VI is currently accepting work permit renewals for people who are on and off island, but as for new and temporary permits, most potential employees will have to wait. Mr. Wheatley added that new work permits for certain “critical” specialised areas are currently allowed.

The minister also said that within a week, a taskforce would be launched to “flush out” people who are not abiding by the terms of their work permits. Though immigration officials have so far given some leniency to people struggling to get their affairs in order amid the pandemic, he warned, anyone who is working in the country illegally should immediately contact the Immigration Department to “get yourself straight, or get yourself ready to leave this country as soon as you can.”

Mr. Penn also made it clear that working illegally in the territory would not be tolerated, and asked people not to take unfair advantage of the current situation.

“We are a country of laws,” Mr. Penn added. “We cannot go on any longer allowing persons to be in this country in this manner. Therefore, we are putting things afoot to deal with this and stamp this out altogether.”