Around dusk on Tuesday of last week, St. John resident Sharon Coldren was eating dinner in Coral Bay when she smelled something burning. “It didn’t smell like wood smoke; it …

END_OF_DOCUMENT_TOKEN_TO_BE_REPLACED 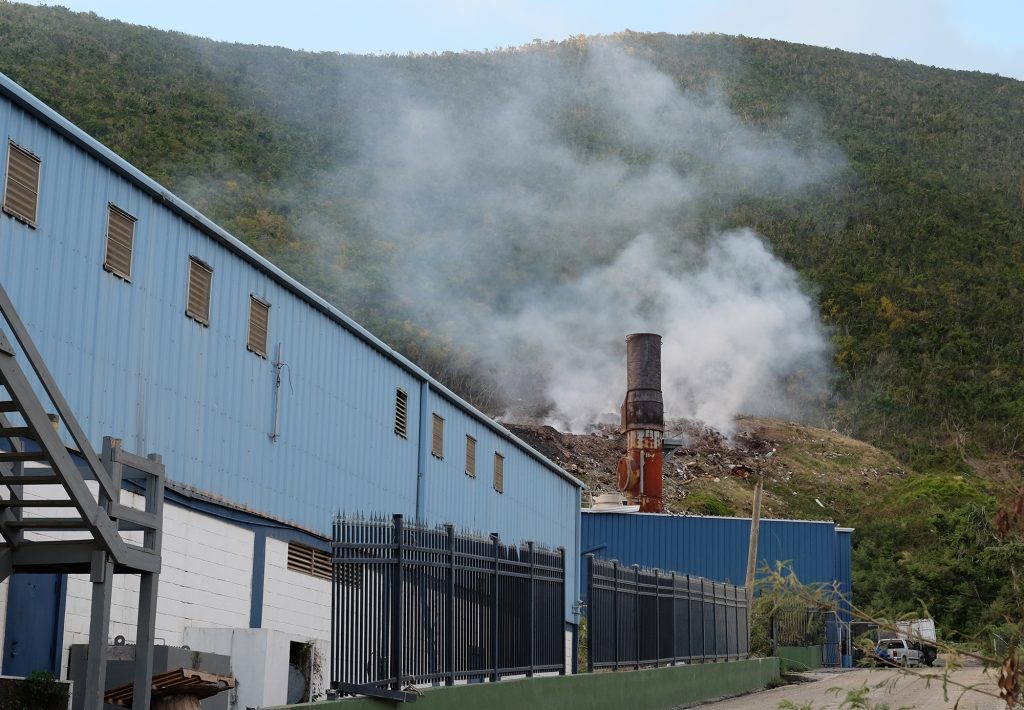 Around dusk on Tuesday of last week, St. John resident Sharon Coldren was eating dinner in Coral Bay when she smelled something burning.

“It didn’t smell like wood smoke; it had a horrible, toxic smell — it hurt your nostrils to breathe, and there’s no escape,” she said. “Of course, when you smell smoke that terrible the first thing you want to know is where is the fire.”

The smoke had drifted over from Pockwood Pond, where a section of the landfill had spontaneously combusted.

Residents from across this territory and the United States Virgin Islands, including those roughly 20 miles away on Water Island, posted on Facebook that they could smell and see the smoke.

Greg Massicote, manager of the Department of Waste Management, said several factors likely contributed to the blaze, including the decision to shut down the island’s incinerator for roughly a week during December.

The department was dealing with frequent power outages, and its backup generator also malfunctioned. Without a secondary source of power to rely on during outages, Mr. Massicote said, the incinerator needed to cool down properly or it could have sustained structural damage.

During that time, hundreds of tonnes of residential waste that would normally be incinerated were trucked up the hill to the landfill.

The department head said those items were “regular” combustible garbage and “nothing” hazardous.”

“Space is very tight there, and the garbage that was transported eventually spontaneously caught on fire,” Mr. Massicote said. “Garbage in itself gives off methane gas as it decomposes, which is flammable. We also have ash [taken from the incinerator] in that area, so basically it was a recipe for spontaneous combustion if not handled properly.”

When DWM employees first noticed smoke coming from the landfill on Monday night, they brought excavators to try to smother the fire with soil and stop it from spreading further.

Mr. Massicote said actually containing those spontaneous fires, though, is difficult and that the department usually “allows it to burn out.” As of yesterday, smoke could still be seen coming from the site.

“It would give off some smoke as the fire dies down,” Mr. Massicote said.  “Even if a fire truck is able to out the fire, smoke would be generated.”

DWM did call the Fire and Rescue Service, but their help was deemed unnecessary.

“We called the fire truck and they came, but the road to that site isn’t the most driveable, so it was inaccessible,” Mr. Massicote said.

Zebalon McLean, the chief fire officer, added that officers would have proceeded on foot if necessary, with or without a road.

“The environment wasn’t in any immediate danger and there were no nearby homes at risk,” he said. “It was only matter of time until it burned itself out.”

Though there was reportedly no immediate danger at the landfill, residents downwind of the site maintained that thick smoke was making its way through the area and through homes.

Judith Charles, who lives on the eastern side of Pockwood Pond, said she wasn’t bothered on the first day of the fire, when the wind was blowing in the opposite direction.

But after it rained and the wind shifted, she said it smelled like there was an electrical fire in her house.

“It’s kind of alarming to be going home and an entire hillside where you’re living is on fire,” she said. “The hillside is on fire; smoke is pouring out of it. [Depending on wind direction], I know whether I’m going to have a comfortable night or not.”

Ms. Charles added that breathing the smoke exacerbates her asthma.

Ms. Coldren, president of the Coral Bay Community Council, said there have been numerous times in the past several years that St. John residents have been affected by burning on Tortola — whether intentional or otherwise.

“We’re right downstream from you,” she said. “Everything that gets in the ocean, gets in the air, gets to us. It’s not just your environment that’s implicated: It’s ours also.”

To deal with last week’s unexpected fire, the dumpsite was completely shut down until the fire was better tamed.

“Even non-combustible stuff — anything that comes in during that time — we pile it in the yard to prevent any further igniting to occur,” Mr. Massicote said, adding that the department will add more soil to the site this week and then reopen it.

To reduce the amount of fires of this kind in the future, he said, combustible and non-combustible waste always needs to be separated. Construction workers and residents transporting their own waste to the facility are asked to separate garbage based on that distinction.

“We will continue to ask that of [residents bringing their own waste] until there is proper legislation or enforcement of proper separation, but for now we just ask at least … separate between combustible and non-combustible,” he said.

Mr. Massicote added that workers at the site look for flammable items when waste is brought in and try to separate them as much as possible, but, for instance, a truck could be carrying things like tree trimmings, yard waste or wood at the bottom of its load.

Fires of this nature have happened before and are not necessarily uncommon, but Mr. Massicote stressed that DWM does not light them intentionally.

“We did not light any fires,” he said. “I know that’s a popular concept because of previous experiences, but we do not open burn on Tortola. That’s not our concept.”