The Royal Virgin Islands Police Force celebrated its newest — and largest — class of recruits at a ceremony last Thursday. The passing out of certificates and awards for the …

END_OF_DOCUMENT_TOKEN_TO_BE_REPLACED 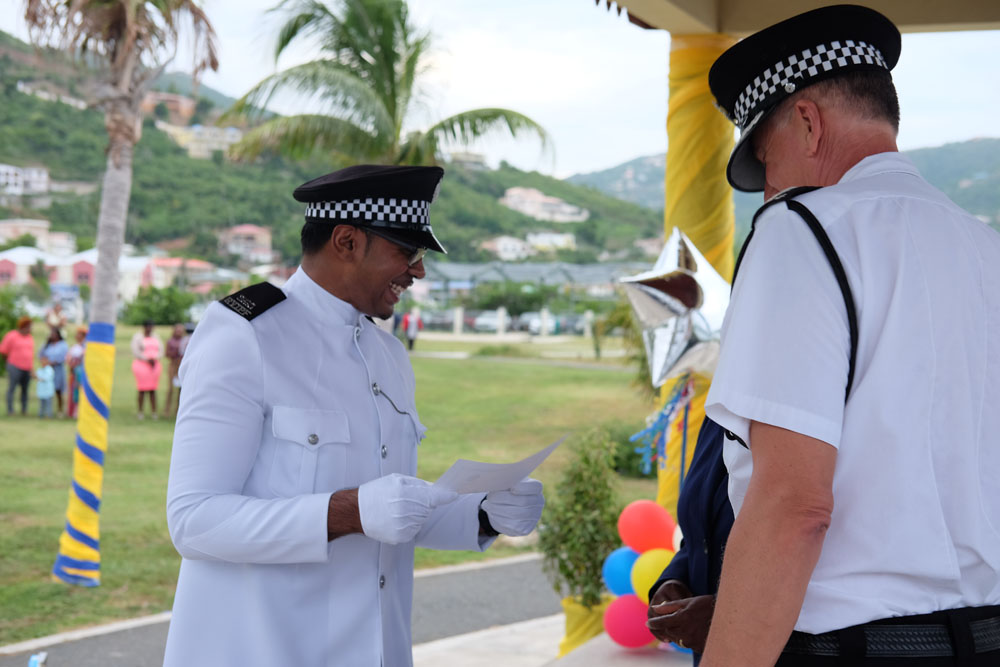 In total, 26 officers were given certificates last week to recognise the completion of their training. (Photo: AMANDA ULRICH)

The Royal Virgin Islands Police Force celebrated its newest — and largest — class of recruits at a ceremony last Thursday.

The passing out of certificates and awards for the 2017 recruits was more than a year overdue. A group of 27 regular officers, including four auxiliary officers, completed their initial six-month training last year, though the official ceremony marking their accomplishments was postponed after hurricanes Irma and Maria.

Despite a delay in recognition, the recruits “made history” for being the largest cohort, which was then forced to act in the chaotic aftermath of Irma, officials said last week.

“And as I approached I realised it was two of you: Two of our brand-new recruits six months in were out there on patrol, in uniform, looking professional and trying your best to help,” he said at the ceremony. Mr. Matthews added that experienced officers can educate recruits about the law and professionalism on the job, but some lessons — like how to respond after a natural disaster — are more difficult to teach.

“What I can’t give you is courage,” he said. “You have to find that from inside yourself, and each of you has to do it in
your own way.”

Of the 27 initial recruits trained last year, 40 percent are Virgin Islanders or belongers. The force also recruited its first officer from the Philippines, along with three from the Dominican Republic.

Although the Filipina recruit was a “success story” and completed her training in 2017, she made a “personal decision” to
return to the Philippines after Irma, Mr. Matthews said last week.

“For the bloggers, there’s nothing suspicious in that. It just wasn’t for her,” the commissioner added. “But the 26 of you standing here today: It clearly was for you.”

In his remarks, the commissioner agreed with Mr. Fahie, reminding the recruits that they now have important responsibilities.

“Police officers are ordinary people that are vested with extraordinary power, and it’s how you use that power that is the mark of professional policing,” he said. “For the small minority that occasionally let the force down, the vast majority stand firm and deliver the best policing they can.”

The 2017 recruits were the second police cohort to be trained on the H. Lavity Stoutt Community College campus. HLSCC President Judith Vanterpool said police training is one way to accomplish her goal of taking the college “back into the community.”

“I am very happy and humbled that training can be done locally,” she said. “You’re invited to come again.”

The commissioner thanked Mr. Vanterpool for the college’s enthusiasm in hosting the force. “I can guarantee you we’re coming back,” he said.

In total, 26 officers were presented with certificates last week, and several were given additional awards.