Dressed in their formal robes, judges, magistrates and lawyers gathered Monday on the fourth floor of Sakal Place to celebrate the beginning of the new law year. Noting that the …

END_OF_DOCUMENT_TOKEN_TO_BE_REPLACED 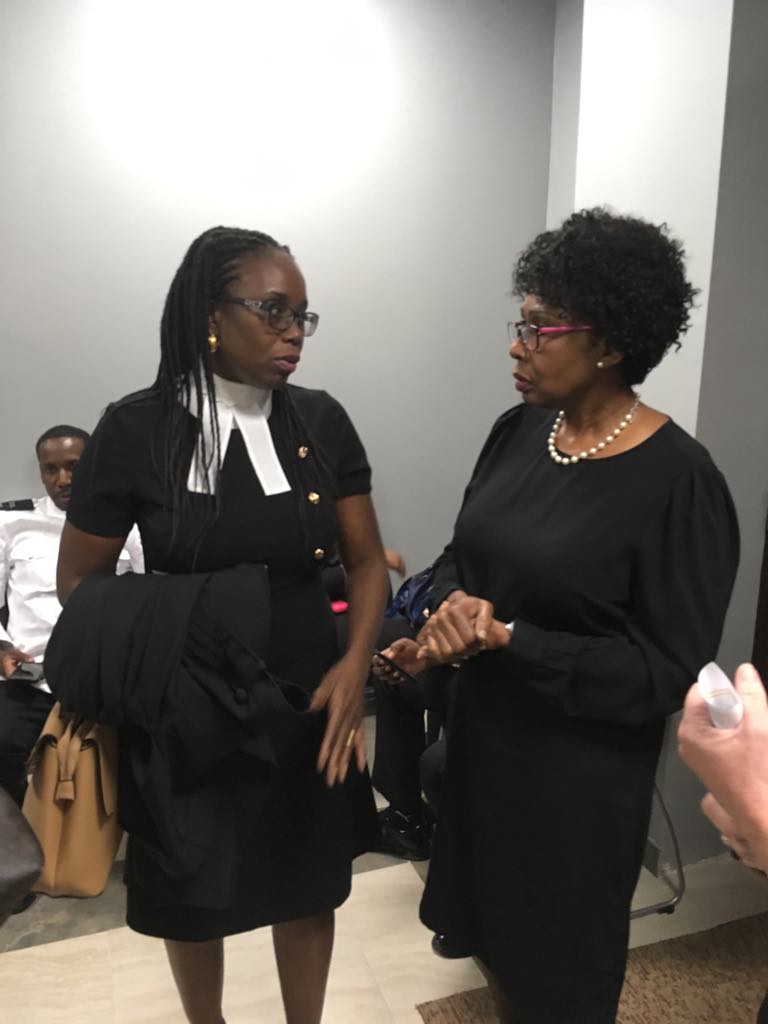 After a morning church service, legal professionals marched to Sakal Place, where they listened to their colleagues describe the weaknesses the courts are working to overcome during the new law year, as well as the improvements they hope to make. Afterwards, the mood was convivial as lawyers mingled with one another following a long break. (Photo: JOEY WALDINGER)

Dressed in their formal robes, judges, magistrates and lawyers gathered Monday on the fourth floor of Sakal Place to celebrate the beginning of the new law year.

Noting that the day’s special sitting was taking place in the new court facilities for the civil division — the first time the Virgin Islands has dedicated a space for this purpose — High Court Justice Vicki Ann Ellis, the senior resident judge, thanked the attending government officials for making space in the budget for the court system’s needs.

“On behalf of the entire judiciary, I want to take this opportunity to thank the BVI government for the outstanding efforts taken to ensure we have the structures and facilities necessary to do our work,” Ms. Ellis said.

The judge also noted that significant repairs have been made on the buildings housing the criminal and commercial courts.

However, several of the speakers called on government to go further by accomplishing a longstanding pledge.

“We welcome the renewed promise of the government … for a new halls of justice,” said Dancia Penn-Salah, representing the Inner Bar. “People of my age and vintage in this bar have invested a lot of time in our lives to seeing a halls of justice become a reality.”

In another nod to the progress of the court system, Ms. Ellis also lauded the territory’s commercial court for its work during its first ten years.

Though Ms. Penn-Salah thanked the government for providing the court with physical resources, she also warned about the dangers posed by the Jury Act 1914, which she urged government to amend.

The law requires the High Court registrar to select jurors from a list of candidates that includes non-belongers who have lived in the territory for at least ten years, but up until last summer jurors had been drawn from the list of eligible voters, which excludes long-term non-belonger residents.

In July, former Director of Public Prosecutions Kim Hollis successfully mounted a legal challenge to the jury-selection process, and no jury trials have been held since.

“There is one ongoing travesty of justice in this country, and it is that of the jury system,” Ms. Penn-Salah said. “I speak for the profession when I make a call for a very urgent rectification of that law.”

Ms. Penn-Salah added that Governor Gus Jaspert did not address any amendment to the law when he outlined the government’s legislative agenda during his recent Speech from the Throne.

While Ms. Ellis agreed that the act has harmed the territory’s legal process, she also thinks that it has sparked important conversations about the future of the VI’s legal infrastructure.

“It commenced a policy dialogue which is found in every dynamic society and which is ongoing here even today,” Ms. Ellis said, adding, “It is hoped that we will finally see the reform of the Virgin Islands Jury Act.”

Acting Director of Public Prosecutions Tiffany Scatliffe-Esprit, who took over the position after Ms. Hollis resigned in December to care for an ailing family member, addressed several new initiatives her office plans to spearhead during the new law year.

Ms. Scatliffe-Esprit, for example, seeks to reinstate the Community Prosecution Project, which educates members of the public about the DPP’s role and the territory’s criminal justice system as a whole, she said.

As part of this initiative, the DPP launched outreach programmes during the 2014-15 school year at Willard Wheatley Primary School and Alexandrina Maduro Primary School, but these ceased after the 2017 hurricanes.

With the relaunch of this initiative, Ms. Scatliffe-Esprit wants to again focus on the territory’s youth, she said.

“We wish to extend this programme to our secondary schools. It is an unfortunate reality that our teenagers and young people end upon the wrong side of the law as a result of making poor decisions,” Ms.Scatliffe-Esprit said. “We are of the view that these programmes are essential to preserving our youth and reducing youth crimes.”

As part of the programme, the DPP’s office plans to lead civics and conflict resolution programmes in the territory’s schools in partnership with the Ministry of Education and the Deputy Governor’s Office, she said.

Ms. Ellis also introduced a proposal to combat violence. With rising rates of domestic violence and increased “child abduction matters and other contentious family proceedings,” there is a growing need to establish a division of the court solely responsible for familial matters, the judge said.

“These are all very important matters,” she added. “However, they are time-consuming because the litigants are often unrepresented. I think the time is fast approaching where we will have to consider a dedicated family division.”

She also said staffing the administrative office of the Magistrates’ Court — where many domestic violence cases and youth crimes are adjudicated — remains an issue, which puts a strain on the court’s administrators.

“Though positions are available to be filled, … the revenue came in short, and this mitigated against recruitment, and it would seem this would be the position for the foreseeable future,” the senior judge said.

“Manpower issues,” she added, have also made it difficult to ensure constant police presence at the courts.

However, she said that with the help of the Deputy Governor’s Office and the police force, members of the court are looking to devise “solutions that we can all live with, and I mean that in the most literal sense.”