Business > Lawyers explain benefits of a will

Lawyers explain benefits of a will

More than 90 percent of the attendees at an Aug. 19 forum about estate planning admitted they didn’t have an active will in place. But when asked at the end …

END_OF_DOCUMENT_TOKEN_TO_BE_REPLACED 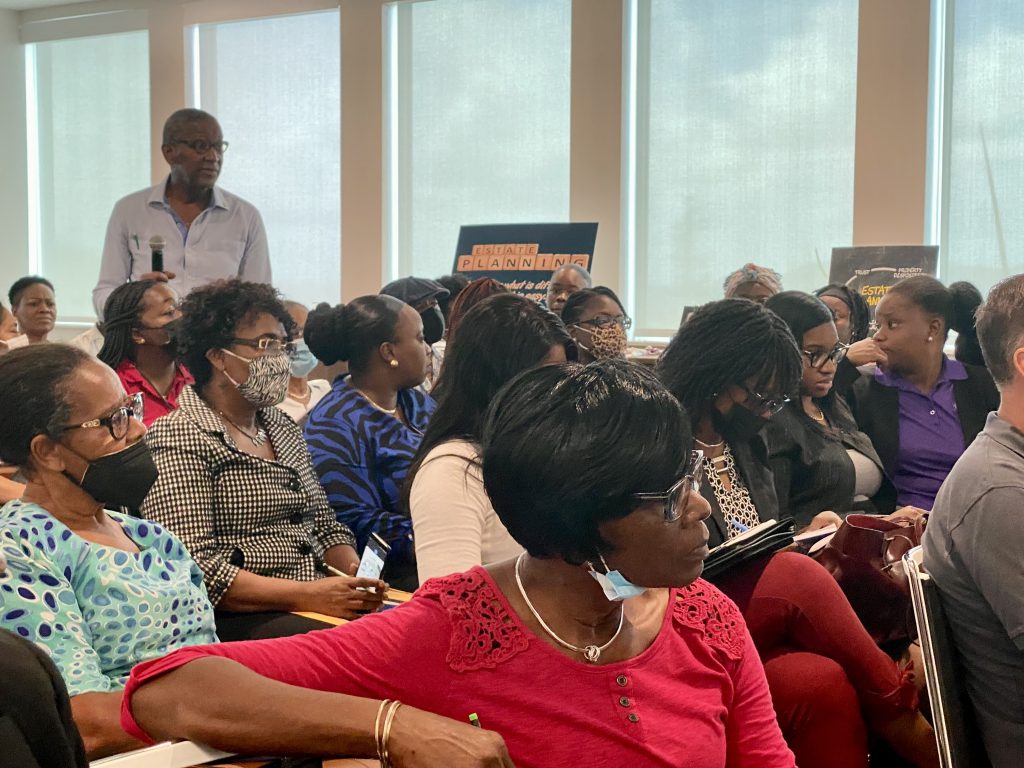 A panel of lawyers explained the importance of writing a will during an Aug. 19 forum on estate planning. (Photo: DANA KAMPA)

More than 90 percent of the attendees at an Aug. 19 forum about estate planning admitted they didn’t have an active will in place. But when asked at the end of the session whether they believe wills are needed even when family members are aware of their post-mortem wishes, nearly all the attendees said yes.

Money Matters BVI and the BVI Financial Services Commission hosted the forum at the BVI International Arbitration Centre to address common misconceptions and explain the laws governing wills and other aspects of estate planning.

Importance of a will

Though anyone over the age of 21 can create a valid will in the Virgin Islands, panellists said many people tend to avoid the subject. But host Rhonda Hodge-Smith, BVIFSC coordinator of financial literacy, encouraged eligible adults to “plan for what is difficult while it is easy,” in the words of Chinese philosopher Sun Tzu.

The attorneys explained that writing a will can ease distress for the people who are left behind. A will can be fairly simple, but at bare minimum it requires the signatures of two official witnesses who don’t stand to benefit from the will, according to panellists. Even if one witness dies before the will-writer, the document stands.

However, there are certain circumstances in which a will can become invalid. Exclamations arose from the audience at one fact: If someone marries in the VI, their will automatically becomes invalid.

Though a person isn’t required to include a spouse or anyone else as a beneficiary of their will, they do have to make those wishes clear in writing, the panellists said.

Having a written will can help resolve all sorts of disputes, particularly among estranged relatives or when one child stands to receive a greater benefit than another.

Panellists said one of the most important designees in a will is the executor, who is appointed to make sure the terms of the document are carried out.

These terms may include specifications for how a person wishes to be laid to rest, how their debts should be settled, who would take care of their children, and how their assets should be divided.

The executor may receive some benefits from taking on the work of carrying out the deceased’s wishes — in fact, attorney Michael Maduro recommended adding incentives to ensure the will is executed in a timely manner — but he or she is not allowed to keep money or land for themselves that isn’t specifically gifted to them.

The experts noted that the position of executor is entirely voluntary, and said consideration should be given to who is best suited to the sometimes “thankless” task.

For larger estates, multiple executors can be named.

The attorneys said that having a trusted executor can make navigating difficult times much easier for loved ones.

Queen’s Counsel Lewis Hunte, founding partner of the firm Hunte & Co Law Chambers and a former attorney general, noted that in the absence of clear instructions, most of an estate can end up going to lawyers on all sides. As with the proverb he quoted, when two dogs fight over a bone, the third walks away with it.

“Sometimes, those who stand to benefit from our earthly possessions that we leave behind and facetiously call ‘our estate’ refuse to share it fairly,” Mr. Hunte said. “They often wage battles that are far more costly and more deadly than you could ever imagine.”

He added that the best way to avoid protracted legal battles is to write a will.

Except for notifying potential executors, a person can and likely should keep the contents of a will private until after their death to avoid conflicts, the experts said.

Even if a document is filed with the Civil Registry and Passport Office, no one else has the right to see it without permission. Mr. Maduro said having a will on file can help ensure it isn’t lost in the event of a house fire, hurricane, or other disaster. Currently, there isn’t any law in the VI that allows a beneficiary to immediately see the entirety of the will even after a person’s death.

There are plenty of “what ifs” that arise when considering estate planning, the panellists said. However, they added, having a plan in place can offer peace of mind.