As the Virgin Islands hopes to scale up its fishing and farming sectors with the ultimate goal of becoming more self-sufficient, participants in a virtual forum last week said it …

END_OF_DOCUMENT_TOKEN_TO_BE_REPLACED 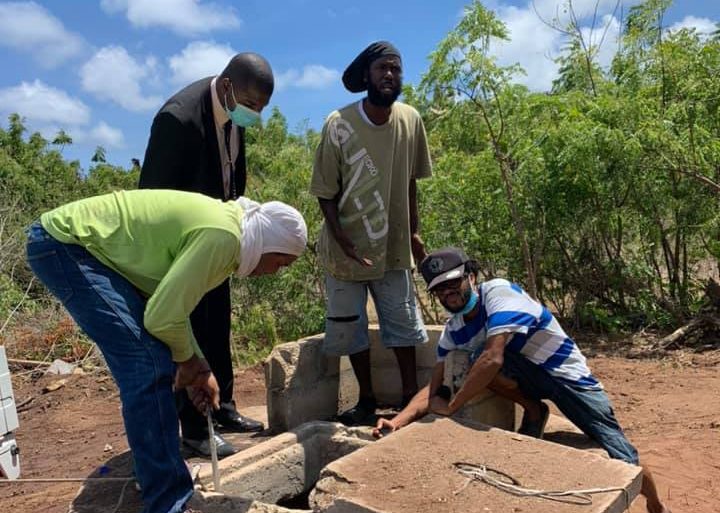 As the Virgin Islands hopes to scale up its fishing and farming sectors with the ultimate goal of becoming more self-sufficient, participants in a virtual forum last week said it will be important to consider issues like irrigation, marketing VI-grown produce, and attracting young entrepreneurs.

Natural Resources, Labour and Immigration Minister Vincent Wheatley held a virtual forum in his district on May 20, welcoming input from ministers, farmers, fishers, restaurateurs, and others from Anegada and Virgin Gorda.

But he said plans were already in the works to revitalise the sector, and the forum was a good opportunity to hash out some details.

“It’s an exciting time in the territory for agriculture and fisheries,” he said. “We know that the sector has been ignored for many years, and really just the diehard farmers were keeping it alive.”

The smart use of fresh water to support larger farming operations will be a key component in building the VI-based industry, Mr. Wheatley said.

Farmers tuning in to the forum said wells already located on the sister islands could be utilised for irrigation, though the brackish water they currently contain would have to be filtered.

Dr. Wheatley said legislators will also have to consider establishing protocols for responsible water use, especially for larger commercial farms.

Junior Minister for Trade and Economic Development Shereen Flax-Charles expressed interest in the marketing side of growing the sector.

She highlighted the importance of “dispelling the myth that agriculture, fishing and farming are historic traditions and nothing else.”

“These are not just activities that are culturally relevant, but also economically rewarding,” she said.

In April, Dr. Wheatley proposed establishing an entity to purchase locally grown food from multiple farmers to then sell as a larger unit to supermarkets, restaurants and hotels. He is also interested in exploring the possibility of such an entity to provide micro loans to producers, he said.

Initial plans aim to ensure the entity “has a kind of cultural flair and that can really help make the connection between our tourism product and our agriculture and fishing industries,” he explained.

Callers last week also discussed other ways to intertwine tourism and food production. Farmer Jahnai Caul said tourists have shown interest in interactive experiences with VI trades, like spending a day on a farm or tagging along for a fishing excursion with a resident rather than a larger sport fishing charter.

Participants suggested it could be possible to explore these options during the slow season.

District Nine restaurant owners, including Sharlene Thomas, said tourists often show a strong interest in VI cuisine, and chefs would love to promote the use of locally sourced ingredients in their kitchens.

“I am convinced that if the small farmers we have right now on the island are doing it, markets will buy from them,” he said.

Mr. Wheatley said it will be important to not only invest in producing food, but also to explore opportunities in intellectual property. He hopes such efforts could lead to a product gaining popularity that is only produced in the VI, specifically recalling the introduction of the Virgin Islands white sheep.

Shea Alexander, who moderated the forum, said exploring plant genetics and modern farming techniques could also be a good way to attract young people with an interest in one day running their own farming or fishing operations. Mr. Caul said the intricacy of hydroponics was one of the things that drew him to the industry.

Tourism and financial services are often described as the two pillars of the VI economy, and government leaders often have highlighted the need to diversify — which they say has been exemplified by the financial hardship many residents are facing after the coronavirus pandemic effectively closed down most of the tourism industry.

Dr. Wheatley expressed hope that food production and exporting could become a lucrative component of the territory’s economy.

He added that his ministry is also looking into fish farming, lobster operations, exporting conch, poultry farming and more. He added that government is looking to allocate some Crown lands on Virgin Gorda for new production. Cabinet on March 20 approved a $2 million stimulus plan to promote self-sustaining fishing and farming in the VI, and in April the minister outlined what applicants for the funding said they needed most. Of the applicants, 157 are farmers, 82 are fishermen, 83 are both, and five did not specify. The biggest challenges farming applicants faced were lacking irrigation, access to suppliers, import costs, and the need for seeds and seedlings, Dr. Wheatley explained.

Fishers, he added, requested the means to repair damaged vessels and engines, and to maintain their equipment.

Dr. Wheatley said although the stimulus is not a lot of money in terms of large-scale food production, it is a good starting point for growing the industry and identifying challenges.

Not everyone who applied for financial assistance will be able to get it this time around, however: He said priority will be given to fishers and farmers with the potential to produce quickly.

But the minister added that he hopes others will be able to access future programmes as the sector grows.

Mr. Wheatley said he hopes to inspire confidence in the VI’s food production industries by setting specific action points and timelines for building a strong, self-sufficient business. Though the VI economy has been hit hard by the pandemic, he said it is important to plan beyond the immediate challenges.

“The decisions that we are looking at now are going to shape what the BVI looks like at the end of this year, next year, and years to come,” he said.