From starfruit to soursop, guava to guinep, coconut to callaloo, the Virgin Islands is full of appealing flavours, and they all should be celebrated, Premier Ralph O’Neal said at the …

END_OF_DOCUMENT_TOKEN_TO_BE_REPLACED 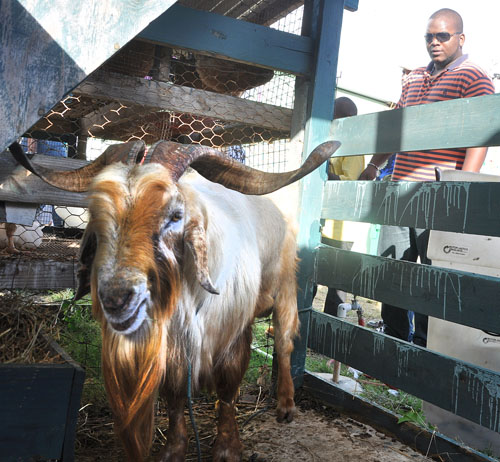 Photo: FREEMAN ROGERS This goat, a Nubian-Boer cross, was among dozens of farm animals on display at the Farmers’ Week celebrations at Paraquita Bay this weekend.

From starfruit to soursop, guava to guinep, coconut to callaloo, the Virgin Islands is full of appealing flavours, and they all should be celebrated, Premier Ralph O’Neal said at the Farmers’ Week opening festivities on Friday at Paraquita Bay.

The premier shared his recent experience sampling a drink made from breadfruit for the first time.

“I love breadfruit,” Mr. O’Neal said, “but I never knew there was a drink made from the breadfruit.”

Mr. O’Neal called it sad that the territory has moved away from local drinks in favour of international soft drinks, even though “a glass of limeade is more refreshing than a Coke,” he said.

Throughout the opening weekend festivities, vendors sold many varieties of such local drinks, but not as many soft drinks, said one vendor.

“I don’t even have Coke,” said Jeanne Smith, who was serving johnny cake and other goodies along with drinks made from sorrel, jackfruit or tamarind. “People like these better,” Ms. Smith said, adding that she has helped her family run a booth at Farmers’ Week for the last few years.

Though not a farmer herself, Ms. Smith said she was glad to see so many people turn out to celebrate farming.

“It’s so important. This is how we eat, but it’s also what we’ve come from,” Ms. Smith said, adding that with modern conveniences such as pre-packaged food, it’s easy to forget the work farmers put in and the source of the food we eat.

In recent months, that work has been particularly difficult, thanks to Hurricane Earl and the subsequent flooding that destroyed many of the territory’s crops, some farmers said.

“This year the weather really beat us up,” said Karimah Rauf, who grows fruits and vegetables in Old Plantation. “Though we had all that water, afterwards there was a drought.”

Still, Ms. Rauf, who participated in Farmers’ Week for the first time last year, said she had sold much of her vegetables, fruit trees, gooseberry jam and other products.

Nearby, Wallah Turnbull was grinding sugar cane he grew on his half-acre plot in Leonards Estate and selling the juice.

Though several customers lined up in front of his booth, the farmer said attendance was down from the previous nine years he has participate in the event.

“I guess that people knew we had a hurricane, so people wasn’t expecting much,” he said, adding that he lost much of his crop to Earl.

Still, he wasn’t complaining: He was there “just to make a living, not a killing,” he said.

The premier was also keen to remind the public of the importance of farmers, who help provide what he called “food security” in the territory.

He described food security as the availability of affordable food, without which residents might be at the mercy of foreign rations, as happened in the past during World War II.

“Now, it would be worse,” Mr. O’Neal said, because the population in the VI and United States Virgin Islands have both grown so much since then.

Another way to describe food security is “self-sufficiency.” In addition to relating to this year’s Farmers’ Week theme – “Reduce Overseas Dependency Through Farming and Technology” – this ideal requires the territory to focus on the fruits and vegetables that naturally flourish in this climate, and to put more energy toward technological advances such as greenhouses, said Bevin Braithwaite, chief agricultural officer.

“Greenhouses will help modernise the food sector to a point where food security is no longer a farfetched idea in the territory,” Mr. Braithwaite said.

But as much as Mr. Braithwaite touted technology, he also thanked farmers who still use traditional methods.

“They have performed like true stars, doing backbreaking tasks to produce against countless odds,” Mr. Braithwaite said, adding that traditional farming provides “a safety net for the agricultural sector when technology fails.”

One way the department tried to encourage the development of other technologies this year was with an agri-science projects competition.

Students from secondary schools around the territory submitted research projects on topics such as solar panels, hydroponics and symbiotic relationships. During Friday’s opening ceremonies, the winning schools were announced. Top honours went to Cedar International School for the junior secondary projects, and to Claudia Creque Educational Centre in Anegada for the senior secondary projects.

Many primary school students and other children attended opening weekend festivities as either a school trip or with their families.

“I wanted them to get a chance to get close to the animals,” said Linda Simmons as her children, Jacob, 3, and Liza, 4, bent over cages to look at ducks, chickens, goats and piglets.

The children, giggling and exclaiming at the movements and sounds of the animals, seemed to enjoy the interaction.

“If they’re good, they’ll get to ride on one of the ponies later,” Ms. Simmons said, with a nod to the donkeys and Shetland ponies brought in on Saturday by Tessa Gunter from the BVI Humane Society.

Besides the animals, the Simmons children were drawn to the musical performances and the demonstration by the BVI Grasshoppers, a jump rope and double-dutch exhibition group, Ms. Simmons said.

“I think Liza will be back on her jump rope when we get home,” she said.