Local News > Learning to harvest the sun in 11 weeks

Learning to harvest the sun in 11 weeks

Jason Stevens enrolled in the Power52 Caribbean Energy Institute during a low point in his life, when he lacked hope and direction.   But on May 3, Mr. Stevens, one of …

END_OF_DOCUMENT_TOKEN_TO_BE_REPLACED 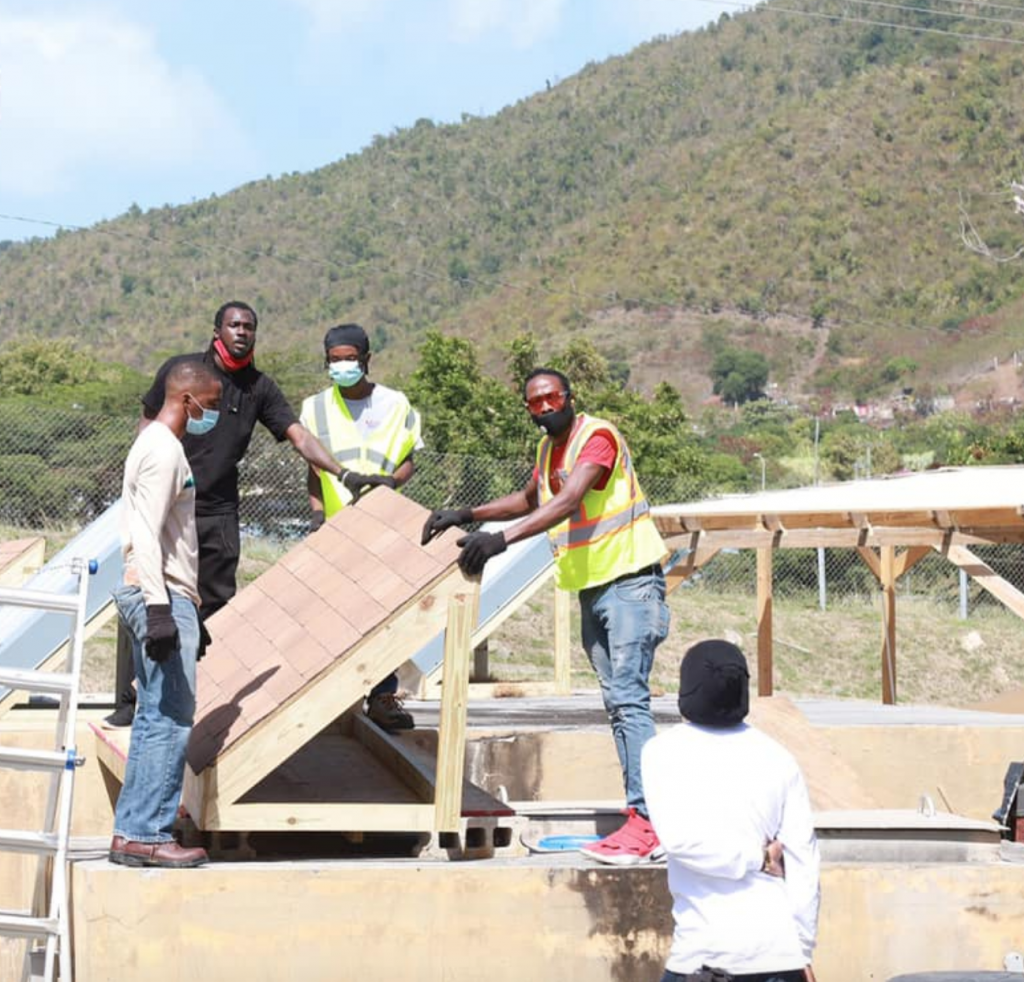 After an 11-week course of hands-on training and collaborative projects, graduates of the Power52 Caribbean Energy Institute expect to enter the job market into a burgeoning field. (Photo: PROVIDED)

Jason Stevens enrolled in the Power52 Caribbean Energy Institute during a low point in his life, when he lacked hope and direction.

But on May 3, Mr. Stevens, one of the 38 graduates of the solar technician training programme at H. Lavity Stoutt Community College, said that through the 11-week course, he formed a kinship with his peers and found new inspiration.

“While I am not exactly certain about the direction I will take, I am hopeful because I am in control of the options,” Mr. Stevens said during a speech at the graduation ceremony at the HLSCC auditorium.

As Premier Andrew Fahie promises a swift embrace of renewable energy by his administration, it is expected that graduates of this programme will help lead the charge, in part by helping build a nearly $5 million utility scale solar plant that leaders have promised will be erected on Anegada this year.

Prepared for the future

United States solar developer Rob Wallace Jr., who co-owns the training institute with NFL Hall of Famer Ray Lewis, grew emotional as he described his pride in the future solar technicians and entrepreneurs.

“It is our job as leaders to make sure that you’re prepared to take over the future,” Mr.Wallace said at the graduation.

One of the biggest draws of the programme was that it would prepare students to take an exam to become certified by the internationally recognised North American Board of Certified Energy Practitioners.

Because the graduates are taking the digitally proctored exams one at a time, 17 students had received this certification as of May 1, though HLSCC President Dr. Georges anticipates all 38 graduates will have sat for the test by the end of the month, he said Monday via WhatsApp.

And while a start date has not yet been announced for the construction of the Anegada project — and BVI Electricity General Manager Leroy Abraham did not respond to questions from the Beacon about whether a contract has been signed — Dr. Georges assured students last week that they will be qualified to work on a variety of projects across the territory, including outfitting the college’s library with solar panels.

According to Dr. Georges, one of the college’s stipulations for this project — which will be funded by a grant from EBSCO Solar, an organisation that finances library solar installations — is that the selected contractor must hire graduates as apprentices.

He added that the VI firms Amandla Engineering and aTec, a solar company, have committed to hiring apprentices for upcoming projects as well.

On Tuesday, aTec owner Dana Miller said he is looking to employ at least four apprentices from the programme.

During the ceremony, Mr. Abraham also said graduates likely will be able to find work installing solar systems on homes and businesses in the territory.

The utility has processed about 15 small-scale renewable energy applications, he said, adding that he expects this number to swell as the newly trained technicians tap into the market.

However, even with their NABCEP certifications, the new technicians will not immediately be allowed to make the connection necessary to export energy produced from panels back into the grid, which is widely seen as the most cost friendly way for individuals to turn sunlight into electricity.

To make this connection, they must apply for a class E licence from the BVIEC Electrical Inspection Unit.

Speaking to the Beacon last year, Mr. Miller said that it took about a year for him to receive his licence after submitting his application.

At the graduation, Mr. Abraham said only two people in the territory currently hold a NABCEP certification and a class E licence, and he has previously cited a lack of individuals qualified to make grid-tie connections as a primary reason the territory has struggled to meet its renewable energy goals.

Now, he said, the territory has “the local capacity to advance and achieve its renewable energy targets.”

Also during the graduation ceremony, Dr. Georges said students had received another “certification” — this one from the National Centre for Construction Education and Research, a Florida-based construction training organisation — that would prove invaluable on the job market.

But a search of NCCER’s online directory of accredited organisations did not yield any results for Power52 Caribbean Energy Institute, and on Tuesday an NCCER representative who declined to provide her full name told the Beacon, “From what I can see in our registry, I do not see Power52 Caribbean Energy Institute as being an accredited organisation.”

Asked about this response, Dr. Georges replied, “The students have received their NCCER registration numbers as well as digital access to their materials,” but he declined to elaborate, directing follow-up questions to Kellyann Few, who helped teach the course.

Neither Ms. Few nor Mr. Wallace responded to requests for comment for this article.

However, Dr. Georges added that the college is working towards becoming an “NCCER accredited training sponsor,” and that at least three faculty members have become “NCCER certified master trainers.”

Tuition for the HLSCC course cost $12,500, but for most of the students this was offset by scholarship funding, the bulk of which came from a $362,000 grant awarded by Unite BVI.

Of the 33 students receiving financial support for the programme, 23 received full or partial scholarships from UniteBVI, while the rest were funded by donors including the college and BVIEC, Dr. Georges told the Beacon in February.

Five students are paying out of pocket, he added.

Besides founding the training institute together, Messrs. Wallace and Lewis also own Power52 Clean Energy Access, the company that won the nearly $5 million contract to construct a two-megawatt hybrid-solar microgrid on Anegada.

This project has long been heralded as essential to achieving the territory’s long-standing renewable energy goals — such as reducing fossil fuel inputs to electricity on Anegada by 80 percent by 2021 — but in February Mr. Wallace told the Beacon that he and the BVIEC were still negotiating the contract.

Mr. Wallace also has a long history of legal and financial troubles, sometimes arising out of projects similar to the Anegada solar plant.

Since 2010, he has faced at least seven lawsuits from parties who allege he defrauded them, refused to pay his debts, and broke his contracts, among other alleged misconduct.

Although Mr. Wallace roundly denied most of the allegations against him in a previous interview with the Beacon, Maryland courts have ordered him to pay at least $1.2 million to different complainants in recent years.

In 2019, for instance, Mr. Wallace was ordered to pay more than $900,000 to two firms that sued him for alleged misconduct in his role as the developer of a Maryland project similar in scale to the one planned for Anegada.

Mr. Wallace admitted to owing some debts to subcontractors on that project, though he claimed that they were due to an unforeseen change in the local tax code, and that his financier would soon release a withheld final payment, allowing him to settle all outstanding debts.