As Leverick Bay Poker Run founder Nick Willis stood at the awards table, watching the arrival of some of the 260-plus boats that took part in the event this year, …

END_OF_DOCUMENT_TOKEN_TO_BE_REPLACED 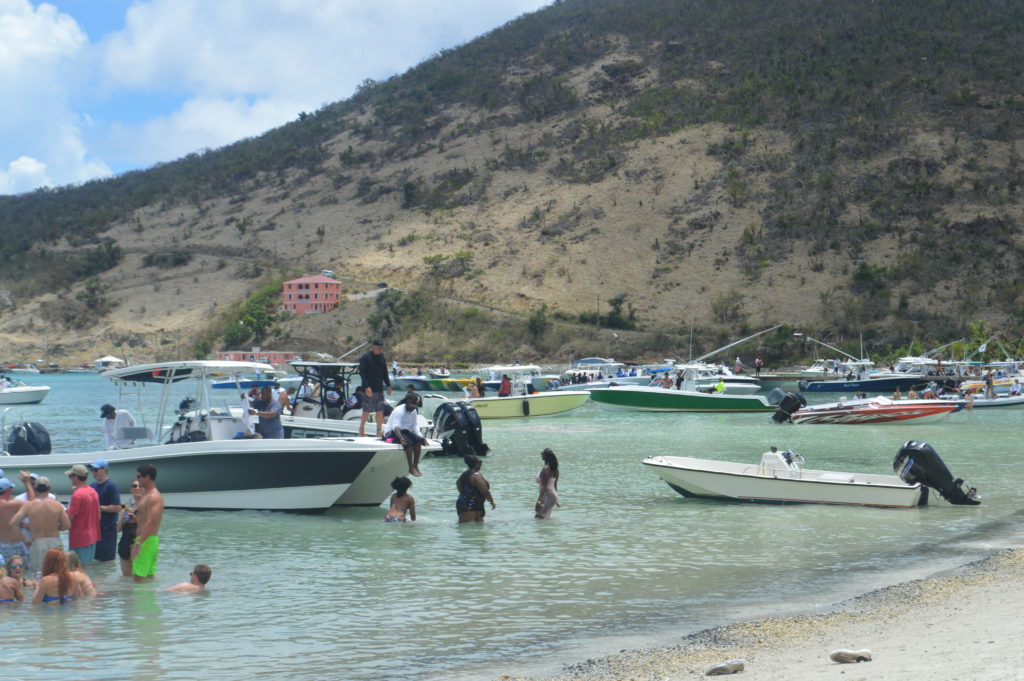 As Leverick Bay Poker Run founder Nick Willis stood at the awards table, watching the arrival of some of the 260-plus boats that took part in the event this year, it seemed to him that everybody who could find a boat was out on the water on Sunday.

Thousands of participants arrived from as far away as Miami, Puerto Rico and the Turks and Caicos Islands, picking up cards and going for the best hand with the hope of taking home some of the $15,000 in prizes. The first place winner was Kalik Aaron.

Besides Leverick Bay, the stops this year were Scrub Island; Great Harbour, Jost Van Dyke; Norman Island; and the Tortola Pier Park, each of which was crowded for much of the day with cigarette boats, dinghies, catamarans and motorboats of all sorts.

“It was bigger and better than I ever thought,” Mr. Willis said. “Even the police were saying how lovely everybody was.”

He said around 15 boats from the group informally known as the “Puerto Rican Navy” were able to make it in the midst of their island’s own hurricane recovery.

They were honoured at Foxy’s Tamarind Bar on Saturday night for the help the group provided the VI after Hurricane Irma.

Other long-time supporters also arrived from throughout the Caribbean.

“We also had guys from Turks and Caicos, who also have their Poker Run — they said, ‘Wow, wow, wow.’ Two boats from St. Croix. And unfortunately, the St. Maarten boat that [usually] comes, they lost their boat in the storm and couldn’t make it,” Mr. Willis said.

“But they were online with us through the day, asking us how it was going.”

The money raised from entry fees will go to the Virgin Gorda Charitable Trust, but Mr. Willis said he won’t know the exact figure until next week.

“I know it’s going to be a lot more than last year,” he said.

At Foxy’s, with a shortage of dock space, boaters moored in the harbour and then waded in.

An unexpected downpour early in the day didn’t stop the live music from Evolution Band, the children on the Splashzone waterslide, or the “Sexy Swimsuit Competition.”

In the morning, developer Doug Riegels arrived at Foxy’s at the helm of his cherry-red Donzi 38 Daytona with his long-time friend Trefor Grant.

They experienced some bumps during the run, including having to scrape two bags of sargassum off the propellers and undergo repairs at Norman Island before the boat could continue on — not to mention a less-than-ideal poker hand.

But once the boaters reached the open water between Norman
and Leverick and spotted their rivals on another cigarette boat, the Awesome, they pushed down on the throttle.

Mr. Grant said he’d been to so many Poker Runs he’d lost count. This one, though, was particularly special: After reaching the end point at Leverick Bay, he said he was genuinely surprised by the large turnout post-Hurricane Irma.

“I actually didn’t expect to see this many people here,” he said. “But the food, the weather, the music, the alcohol. … This is what life in the BVI is all about. Who doesn’t love the Poker Run?”

Mr. Willis and the other organisers initially did not have high hopes for the event this year, given the amount of damage to boats in the territory.

“Never in a million years did I think this would happen,” Mr. Willis said. “But [the BVI Tourist Board] sat down with a meeting and asked me whether I was going to do it. Of course I had to say yes.”

Leverick Bay ended up being a victim of its own success in some ways. The EG Vodka megayacht, which came down from Miami loaded down with alcohol, had to be moved in order to make room for the sheer number of boats attempting to dock.

Marty Krytus, CEO of EG Vodka, who brought the boat, said it was his first time in the VI since Irma hit, and that he didn’t know what to expect.

However, he was wowed by what he saw, given the hurricane damage that was still evident in many places.

“[Many people] still need to fix up their houses, but everybody’s fixed up their boats,” he said.

Mr. Willis also denied rumours that he is retiring from the resort, though he explained that he and his wife Monica are stepping back temporarily to rebuild their home, which was destroyed during Hurricane Irma.

“We just wanted a bit of break,” he said. “We have no house, but I’m rebuilding our house. I promised myself, and it’s too lovely to not rebuild. We are leaving to come back.”