Like CCT and BVI Cable TV, FLOW has filed a lawsuit challenging the levy that the Telecommunications Regulatory Commission recently decided to start collecting for the first time since the …

END_OF_DOCUMENT_TOKEN_TO_BE_REPLACED 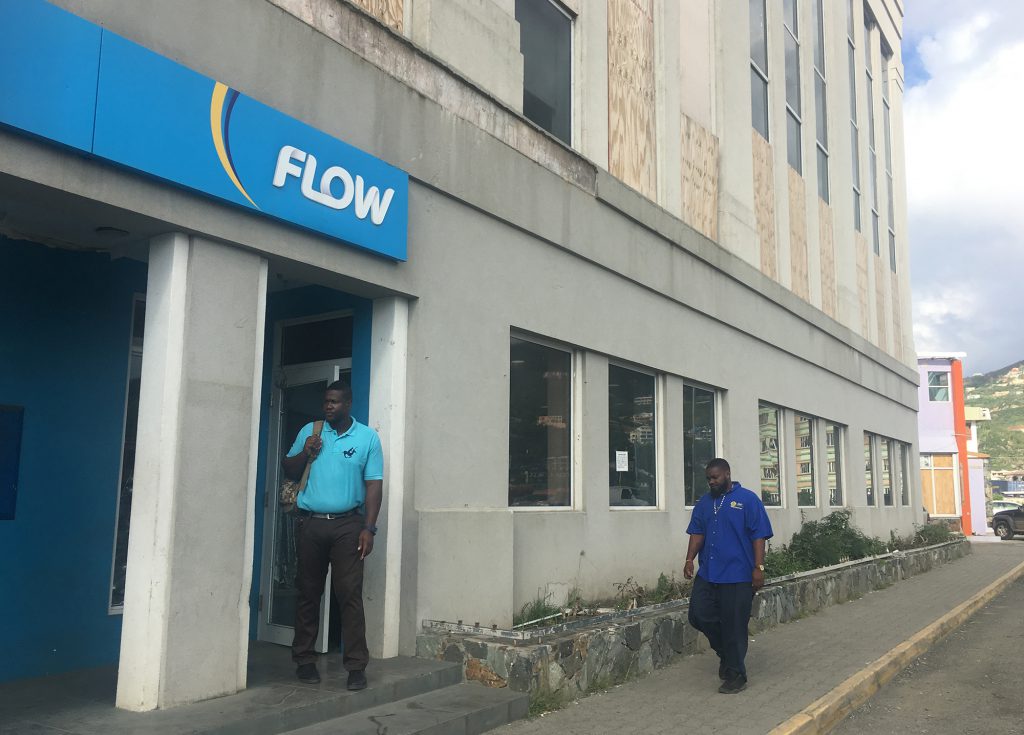 FLOW, above, is the only telecommunications company in the Virgin Islands that provides broadband internet. File photo: CLAIRE SHEFCHIK

Cable & Wireless, the parent company of FLOW, told the Beacon last week that it has filed judicial review proceedings requesting “a review of the manner in which the TRC has unilaterally attempted to implement an industry levy on all telecoms operators for the year 2019-2020.”

According to the company, all VI operators have “historically paid fees to the TRC which are twice the standard amounts paid across the region. The implementation of the levy would drastically increase these rates to an unprecedented four times the average cost paid by operators in other markets, making the TRC by far the most expensive regulator in the Caribbean.”

The company called the levy a “devastating blow to the telecommunications industry,” which is recovering from the 2017 hurricanes and currently in the midst of coping with the Covid-19 pandemic, and said it believes that the levy would result in a “general increase in telecommunication costs
across the BVI.”

In its statement, FLOW added that it believes it has “exhausted all other means of finding a solution to the levy issue with the TRC and has sought the court’s review of the TRC’s decision to implement the levy at this time.”

In a separate application for judicial review dated Aug. 6, CCT and BVI Cable TV also asked the High Court to quash the TRC’s decision to impose the levy.

In its filing, CCT alleged that the TRC “used an improper and opaque procedure” in preparing estimates of the com- mission’s expected expenditure income for 2019-2020, and calculated the levy using an “erroneous methodology” using total expenditure rather than net expenditure.

Furthermore, CCT claimed that the commission calculated the levy “without taking into account any surplus or deficit from the previous financial year and demanded payment of the sum levied without reference to such adjustment,” and imposed the levy when “on the true interpretation of the Telecommunications Act 2006 such a levy ought not to have been imposed.”

According to the CCT filing, CCT and two other “licensed network operators” here detailed their complaints in an April 9 joint letter to the TRC.

The TRC responded in a letter on April 20, in which it addressed the matters, and then in a June 19 letter it “rejected the contention of [CCT] and other licensed operators that its imposition of the industry levy had been carried out in a manner that was procedurally irregular,” according to the filing.

TRC CEO Guy Malone has not responded to requests for comment on the filing, and TRC Chairman Vance Lewis declined to comment since the case is ongoing.

Spokespeople for CCT and Digicel have not responded to questions about the matter.

Although the Telecommunications Act 2006 has always allowed for the collection of the levy, it was not imposed until recently, according to Premier Andrew Fahie.

In June, Mr. Fahie told the House of Assembly that under Section 58 of the act, the sources of revenue for the commission include an industry levy and royalties.

“This is the first time in the history of the commission that the TRC budget has been approved and laid before the legislature” as directed in the act, Mr. Fahie claimed at the time, adding that since the inception of the commission and the Telecommunications Act 2006, “the industry levy has never been collected.”
The premier said that the forgone levy revenue exceeded $23 million for the period from 2006 to 2019.

“This year, I’ve directed the board of the commission that the industry levies are to be collected so that the regulator can do its work,” he said in June. “I can confirm to all that the process has been followed and the levy has been billed with a view to being collected in accordance with the Telecommunications Act, 2006.”