On March 4, 2010, the Conservation and Fisheries Department confirmed the first sighting of a lionfish in Virgin Islands waters. Since then, the department has received scores of reports of …

END_OF_DOCUMENT_TOKEN_TO_BE_REPLACED 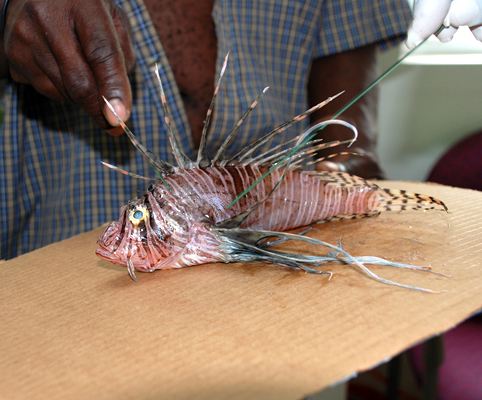 More than 50 lionfish have been caught in Virgin Islands waters since the start of the year. (Photo: PROVIDED)

On March 4, 2010, the Conservation and Fisheries Department confirmed the first sighting of a lionfish in Virgin Islands waters.

Since then, the department has received scores of reports of the invasive predator in several different locations around the territory, according to Abbi Christopher, the CFD’s lionfish management coordinator.

The fish first was sighted near Ginger Island, and the latest report was received from Anegada over the weekend, Ms. Christopher said Tuesday.

This year alone, the CFD has “removed about 50 lionfish from the water,” she added.

Lionfish, invasive predators that have spread rapidly through the Caribbean in recent years, are native to the Pacific Ocean. They typically grow to about 14 to 15 inches in length, but they are said to exceed that size in Caribbean waters, according to Ms. Christopher.