The BVI Little League recently got under way at the Old Recreation Grounds, but organisers are unhappy that a handful of the league’s players are travelling to the United States …

END_OF_DOCUMENT_TOKEN_TO_BE_REPLACED 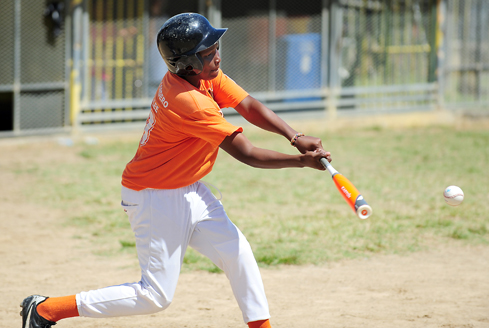 An Orioles batter hits a triple during a Little League game on Saturday against the Athletics. Photo: TODD VANSICKLE

The BVI Little League recently got under way at the Old Recreation Grounds, but organisers are unhappy that a handful of the league’s players are travelling to the United States Virgin Islands to compete.

“We have our own league going on: Why go across there and play in their league?” coach and organiser Raymond Fonseca said. “It is illegal.”

The BVI Little League/Softball Association has raised the issue with Terrence Chinnery, who has been taking three to four players to the USVI to compete. But the Department of Youth Affairs and Sports officer says the players get more exposure and experience by playing abroad, even if a rule is being broken.

“The play over there is much better,” Mr. Chinnery said. “It is beneficial for them.”

He said his guidance has helped players get drafted to the Major Leagues in the United States. Additionally, he has helped several players get recruited to play college baseball. In the past, he has organised both softball and baseball clinics run by college coaches and scouts on Tortola.

“I am not trying to dampen or hurt their league,” Mr. Chinnery said of the BVI Little League.

But BVILLSA?organisers are not happy with Mr. Chinnery’s actions, because they say it does hurt the programme.

Top players that could potentially make the VI national team are travelling to the USVI to compete, instead of playing at home, Mr. Fonseca said. He is worried that these same VI players could make the USVI all-star team and then he would have to face them at a regional tournament.

Last weekend, when Mr. Chinnery travelled to the USVI for the opening of the  Little League there — his team didn’t compete due to rain — it struck a nerve with the BVILLSA.

“We had the problem straighten out, but we just learned that he took more players this weekend [to St. Thomas],” Mr. Fonseca said.  “Some of our kids aren’t even here today.”

But other players who continue to play Little League abroad could face consequences at home, said Mr. Fonseca.

“Those players might be expelled from playing BVI Little League,” he said. “We don’t want to put pressure on these kids, but it is the second time. We need to put our foot down on everybody.”

According to Mr. Chinnery, he recently started travelling to the USVI with Tortola players when his friend, a St. John coach of the Eagles, needed players to fill a roster.

“If we don’t go over any more, his team will have to drop out of the league,” Mr. Chinnery said.

However, the same issue is being raised with the USVI Little League congress, which could put a halt to Tortola players competing in the league, Mr. Chinnery said. But, if this happens, he will continue to travel with the players, because plans have already been made to play exhibition games instead of “official” Little League games.

“You can’t tell a child where to play,” Mr. Chinnery said. “We aren’t breaking any immigration or government laws.”

In May, he plans to travel with several players to compete in a tournament in Atlanta, Georgia.

“It became too much of a baby-sitting service,” Mr. Chinnery said. “So I walked away from it.”

But he continued to coach and run programmes for younger and older players and said due to his contacts in the US, he currently has three baseball players who will be attending college on scholarship in Oklahoma.

When the BVILLSA was formed about two years ago, both sides seemed eager to work with one another. The programme made strides to incorporate players from sister islands and even created a field on Anegada.

Mr. Fonseca said he is grateful for all the work that Mr. Chinnery has done in the past and continues to do for the sport in the territory.

“Half of my players have learned from Terry,” said Mr. Fonseca, who coaches the Orioles, the defending champions. “It is not like we having anything against him, we just need to be as one.”

One of the players that learned under Mr. Chinnery is Yankees’ pitcher Claury Scatliffe — the league’s first female player.

“We faced her in the opening game and she shut me down in the fifth and sixth inning,” Mr. Fonseca said. “She pitches like a boy. She had some of my boys crying. They were ducking away from her curve ball.”

Mr. Fonseca said she is most likely to compete on the national team when they travel abroad for tournaments.

Mr. Chinnery said he encourages players to participate in the BVI Little League.

On Feb. 15, he attended the opening of the BVI Little League, which has seven teams competing in two divisions. In the 9- to 12-year-old division there are five teams. The 13- to 14-year-old division, which is new to the league, has two teams. Organisers are hoping for one more team to join the older division by the end of the season.

Despite losing one team from last year, the overall numbers are up due to the addition of the new division, Mr. Fonseca said.

“We have the same goals as last year,” he said.

In July, the league plans to take a 13- to 14-year-old team to Puerto Rico for the Caribbean championship and the 9 to 12 year olds to the Bahamas.

Last year there were plans to attend the regional tournament in Curacao, but the league ran into issues with funding and had to forgo the trip. However, with the proximity of Puerto Rico and the Bahamas to the VI, Mr. Fonseca is optimistic that the teams will be making the trips.

“We are basically striving to get two teams to the [tournaments],” Mr. Fonseca said.

Although it is early in the season, Mr. Fonseca said he has seen a lot of improvement in the players compared to last year, especially in the older division.

Mr. Chinnery said he will continue to support the progamme on Tortola, but doesn’t see himself making amends with some of the BVILLSA members any time soon.  In fact, he plans to travel to the USVI with players to compete this weekend.

“I have never had a problem, until they have made a big stink about it,” Mr. Chinnery said. “I don’t get anything out of it. I am getting kids exposed. They can play in both leagues and get all the experience.”