Loans worth $50 million sought for recovery

END_OF_DOCUMENT_TOKEN_TO_BE_REPLACED 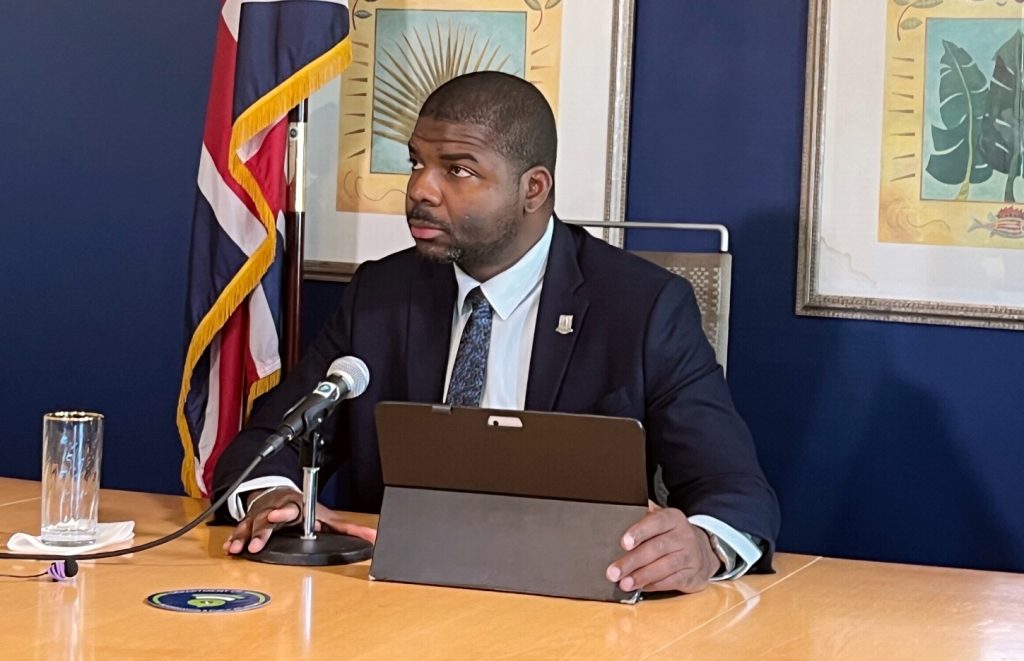 “I’m hopeful by the end of the year that we’ll be able to get a loan to continue recovery,” he said. “I don’t want to give the specific amount, but it will be upwards of $50 million.”

The announcement followed his disclosure last month that an approximately $400 million loan guarantee offer from the United Kingdom was off the table.

Legislators had voted in 2018 to access the guarantee and to establish the Recovery and Development Agency to administer loans obtained through it, but two successive governments then balked over the conditions attached to the deal.

In the meantime, most major recovery projects stalled, and the RDA — which was initially expected to oversee nearly $600 million worth of major projects over a seven-to-ten-year period — has instead spent little more than $32 million on mostly minor projects funded largely through a $65 million loan from the Caribbean Development Bank, according to the RDA’s most recent monthly report, from June.

Dr. Wheatley also noted on Friday that Cabinet planned to discuss the fate of the RDA, which was established in 2018 for an initial period of five years, later that afternoon.

This information was among several updates the premier provided in response to media questions about topics including Commission of Inquiry reform deadlines, roadwork, statutory board appointments, the former premier’s seat in the First District, a national tourism plan, direct flights to the United States, and more.

But first, he opened with a brief statement that focused primarily on his plan to merge the tourism and culture portfolios under the Premier’s Office.

“This is the approach of many countries who see culture as an integral part of their tourism product,” Dr. Wheatley explained. “For us here in the Virgin Islands, this will include ensuring our museums and historical sites are properly managed and promoted as tourist attractions, and that the full artistic talent of our people can serve as valuable entertainment to visitors and our own domestic tourism market.”

The premier added that the territory will aim to invest in training in hospitality, improving internet service, and adding other services to strengthen the tourism product.

Asked about the long-promised national tourism plan, which was put to tender in April 2021, he said the government hasn’t moved ahead with a contract.

“I’m not quite sure that we had a contract, but the decision to move forward with a particular company for a national tourism plan was put on hold,” he said. “It’s a legal matter and I don’t wish to comment on it any further.”

Cabinet decided on March 23 to accept a Central Tenders Board recommendation to award the contract to New York-based public relations firm 5W PR, according to a Cabinet summary published April 7.

The firm was to be paid $1,971,556 in three equal installments of $657,185 for a duration of three years, the summary stated. Successive governments have been promising a national tourism plan for years with little apparent progress.

On Friday, Dr. Wheatley also gave a brief update about plans for improving airlift. Government, he said, is in discussions with Sky High Aviation Services with the hope of establishing direct flights between here and Miami. Sky High is a Dominican Republic-based airline that operates in the region.

“We are in discussions with Sky High airlines about a direct flight, but in the interim we are exploring the possibility of having a connection in the Dominican Republic,” he said. “We also continue to examine the best means by which to expand the runway at the Terrence B. Lettsome International Airport.”

Asked about former premier Andrew Fahie’s seat as the First District representative, Dr. Wheatley said that Mr. Fahie — who is on house arrest in Miami awaiting trial for drug-trafficking conspiracy allegations — could be forced to vacate it once he misses three House of Assembly sittings.

“According to the Constitution, there are certain ways that a person vacates their seat. One is by resigning. A seat is vacated if you miss a certain amount of sittings in the House of Assembly, and according to the Standing Orders you can’t miss more than three consecutive sittings,” he said. “When the next sitting is concluded and Mr. Fahie has not taken part or has not participated, the seat will be vacated.”

However, that sitting, which began Tuesday, could “take a while” because of “hard-hitting” legislation that will require significant debate and scrutiny, Dr. Wheatley said. The previous sitting lasted for about two months, he added.

If the seat is vacated, a by-election may be called depending on how soon the seat becomes vacant before the dissolution of the HOA leading up to the general election next year, the premier explained.

Asked about deadlines set out by his National Unity Government to address promised reforms recommended by the COI, Dr. Wheatley said progress has been good but not perfect.

“We have a few deadlines that we’ve missed, but we’re making good progress. Of course, we know that the governor will soon be giving his first report to the United Kingdom. It’s a lot of hard work — I think the governor will recognise that — but still a lot more work that needs to be done,” he said. “It’s important to say that overall we need to go through a process of reform and make sure we’re able to deliver public services in a more efficient and more effective manner than we have done in the past.”

The premier also stressed the importance of improving the territory’s infrastructure and overall appearance. He added that government will hire more part-time bush cutters to ensure that roads and surroundings are kept clean.

“We want to be able to do bush cutting more frequently,” he said. “There’s some challenges with how we’ve been doing it in the past, especially now with our new procurement rule. We’re going to do the bush cutting through the Public Works Department.”

He also promised to tackle road and sewerage works in the Seventh District, including East End and Long Look.

“I am very displeased with the state of the roads there and I plan to solve it. I plan to get it fixed, and that’s something you can hold me to,” he said.

The premier also responded to questions about security arrangements for migrants, at least 14 of whom have escaped the temporary detention facility at Hotel Castle Maria in the past year.

“I am disappointed that we’ve continuously had people escape,” he added. “We’re going to be building a detention centre. Of course, we’re going to employ our own government personnel to secure the premises.”

He also said that security was beefed up at the facility, but the government has had “some challenges still.”