At last, Bellanseta Creque could finally get creative. Unlike during last year’s Anegada Lobster Festival, which was held less than three months after Hurricane Irma, the owner of Cow Wreck …

END_OF_DOCUMENT_TOKEN_TO_BE_REPLACED 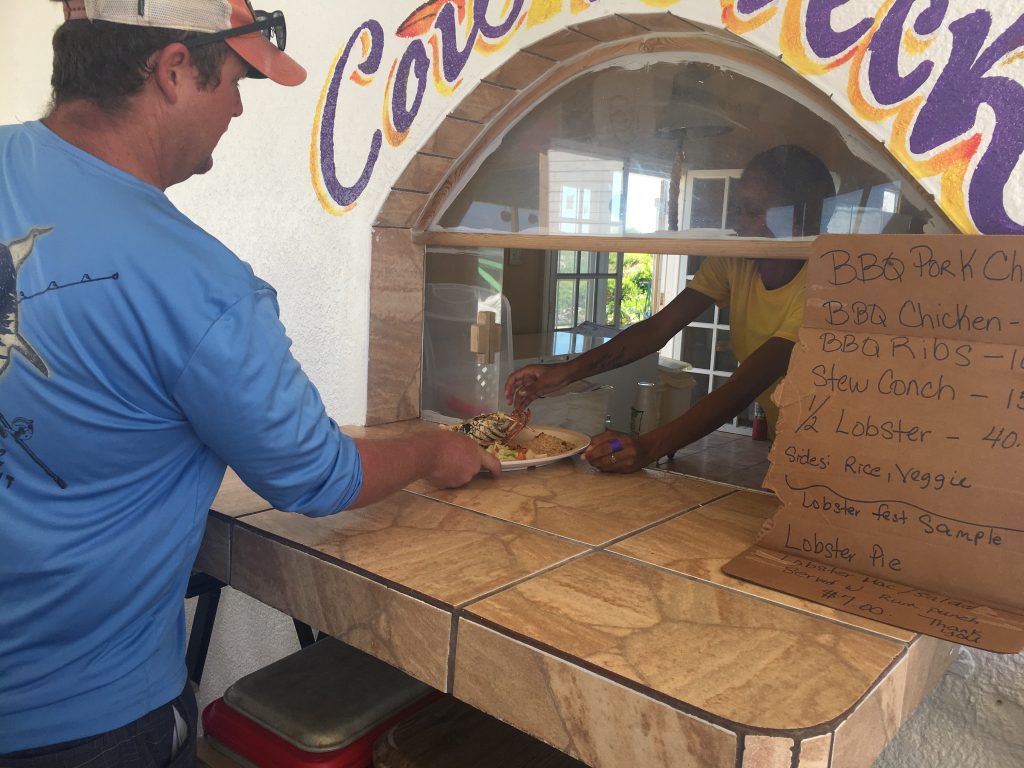 A chef at Cow Wreck Beach Bar serves up half a lobster to a BVI Lobster Festival patron. (Photo: CLAIRE SHEFCHIK)

At last, Bellanseta Creque could finally get creative. Unlike during last year’s Anegada Lobster Festival, which was held less than three months after Hurricane Irma, the owner of Cow Wreck Beach Bar didn’t have to scramble to replace her roof in time to welcome guests, or worry about whether anyone would want to visit a territory that was only just beginning to rebuild. Her home and business repaired, she was free to do what she does best: come up with tasty recipes.

“We change the sampler every year,” she said, referring to the $7 dishes that visitors can buy as they zip around the island at each of the nine participating vendors, filling mock “passports” in hopes of receiving a gift bag at the end of the day.

This year, she explained, instead of the bread-based lobster dishes from the past, she dreamed up a lobster salad with macaroni and mashed potato. And given the traffic — from the charter yachts jamming the harbour to the two car barges — people were buying what she was selling.

“Last year was big considering the hurricane, so I hoped it would be bigger this year and so far it looks good,” she said on Saturday, adding that she’s noticed just as many residents from Tortola, St. Thomas and Virgin Gorda as tourists from further afield. “People needed peace of mind and to get back to normalcy and that’s what Anegada gives.”

strong attendance
Although the weekend wasn’t over yet when she made her prediction, the total numbers proved her right. Attendance was “at least” 3,500, a figure that encompassed arrivals on ferries, on planes and on car barges, according to Keith Dawson, marketing manager for the BVI Tourist Board.

Given the masses of private boats in the harbour at Setting Point, the figure likely went beyond that.

“It definitely met our expectations,” he said. “I would say it even exceeded expectations.”

Last year’s attendance numbered about 1,500 people who arrived by ferry and about as many who arrived by other means including airplanes and barges, Mr. Dawson estimated.

This year, the numbers were up.

“It’s fantastic,” she said as she stood at the BVITB tent near the ferry dock in a festive oversized hat and a bright orange themed t-shirt, directing visitors who poured off the five ferries — three from Tortola, two from St. Thomas — and two car barges.

“The islands are rebounding, so we’re happy for that,” she said, pointing out that even the number of participating restaurants was up from last year, with nine to last year’s six. “The business community here in Anegada has been very supportive of the event.”

“The businesses are a little more organised,” she explained. “They’re more confident in what they’re doing; the samples are varied; we’ve been able to get the government departments to work more together in understanding the importance of Lobster Fest as a major event in the BVI.”

This year, the festival, which marked the last week of the BVI Food Fete taking place throughout November, included an additional bar crawl through Anegada on Friday, where a $25 fee got patrons free transportation to six bars. And as the weekend continued with street vendors, caterers and souvenir sales, she said, the festival was a hub of economic activity, not to mention a multimedia experience, between live music from more than six bands.

“It’s just to showcase that Lobster Fest is a growing event and it’s more than food,” she said. “There’s lots of music, food, friends and BVI Tourist Board hospitality.”

Aaron Soares, a co-owner of Neptune’s Treasure in Setting Point, was one of the residents who was back to serving lobster after taking a year off.

“We got destroyed last year by Irma, so we didn’t participate,” he said at the counter, in between fielding questions from guests about where to buy live lobster. “We only reopened in January, then again for the season in November.”

Since he was travelling last year as the restaurant rebuilt, he had no basis for comparison, but he said attendance seemed robust, with safari buses bringing in a steady stream of hungry crowds eager to taste the crustacean in all its mouthwatering iterations, from lobster bisque to lobster Rockefeller to lobster Thermidor.

Elroy Smith of St. Thomas, who arrived on Friday for a weekend-long stay, was excited to visit the island for the first time. Unlike his own island, he heard that Anegada managed to dodge major damage from Irma.

“We got wrecked, but Ane- gada was spared,” he said, adding that he saw a lot of potential in the island to be a major destination. “If they develop it and have more hotels and more restaurants and more places to go, they would do good. It’s a beautiful place. That would bring the people; if the people know if they have places to stay, they will come.”

As someone who frequently travels by boat, he knew Anegada can be difficult to reach, but he said it was worth the trip.

“We always knew it was a rough island to get into, but if you come in with the right captain or somebody who knows the place well, it’s not a problem,” he said.

He remarked that his journey to Anegada was two years in the making. In 2016, he was in Virgin Gorda and all but ready to visit.
“We were planning a trip to go to Anegada and they cancelled it because something went wrong with the boat so we didn’t get a chance to come,” he explained. “Now here we are, and it’s a great place to be.”