Featured articles > Local pottery fires up in the territory

Local pottery fires up in the territory

Nestled in Josiahs Bay is a small garden of colourful flowers, butterflies, bees and the only wood-fired kiln on the island. The hum of a potter’s wheel can be heard …

END_OF_DOCUMENT_TOKEN_TO_BE_REPLACED 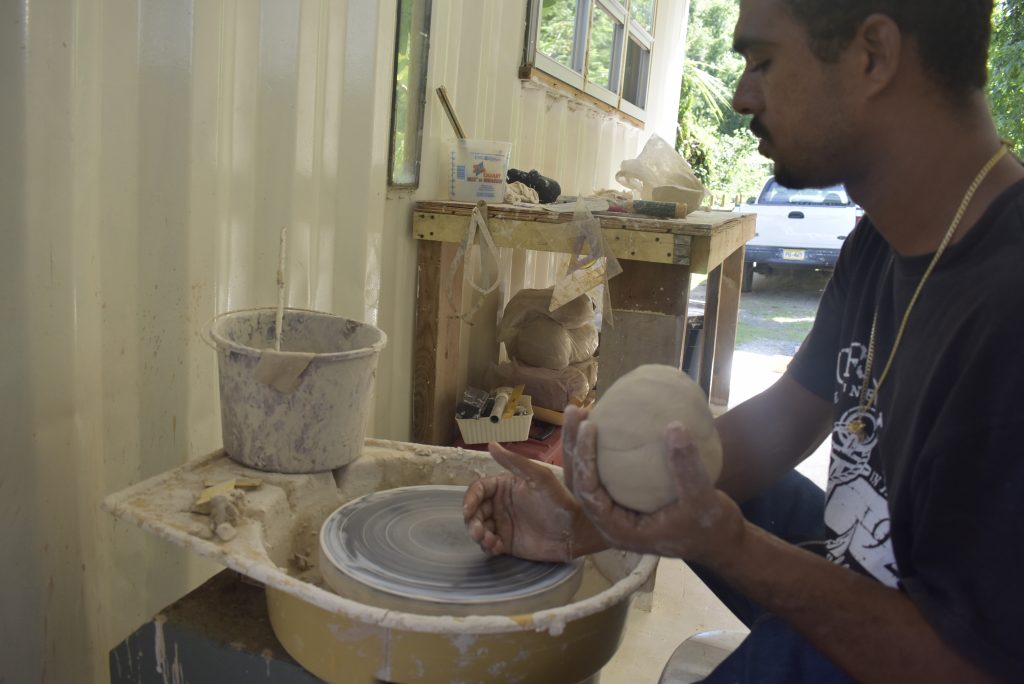 Nestled in Josiahs Bay is a small garden of colourful flowers, butterflies, bees and the only wood-fired kiln on the island. The hum of a potter’s wheel can be heard on any given day as Karl Burnett sits inside his open-door studio, sculpting clay.

“Most of what you see was done by myself, my close family or very close friends,” Mr. Burnett said of the garden and studio. “Opening day was kind of surreal.”

The studio is the newest pottery business on Tortola, which boasts at least two others. From the creation of the only wood-fired kiln on Tortola to custom-made lights decorating public spaces, each of the three local establishments provides its own spin on clay.

Since opening his business in spring, Mr. Burnett can often be found working there.

In the middle of the grounds is a wood-fired kiln that he created with the help of his friends and family. Though he has been using an electric kiln to fire his pieces, he is eagerly anticipating the day he can use the new one and say that the Pottery Garden is in “full function.”

Next to the kiln is a display room filled with Mr. Burnett’s work. It has taken him six years to reach this point, which came after a decision to take his art more seriously.

Introduced to pottery at the then-BVI High School, Mr. Burnett recalled that he wasn’t attracted to other traditional majors and he chose to stick to art. He soon discovered ceramics.

“The first lesson: I knew that it was something that I felt good doing. I knew it was what I wanted,” he said. “The love began from there.”

“After leaving school I convinced my family to get me the same wheel that’s electrical and some clay. I practised at home and I developed my skill from there,” he said. “I just started potting full time this year in March, though I’ve been practising since 2002. I used to sell my pottery sometimes out of the back of my pickup truck.”

Having the space to do what he loves and living as an artist is “like a dream come true,” he said.

Mr. Burnett uses local materials in his glazes from clay found in Tortola, and he hopes to fire up the kiln using local wood as well.

“When I’m able to produce pottery that has been produced with local clay, glazed with local glazes, and fired with local wood, then I would feel like I have completed it,” he said.

On full moon nights in Trellis Bay, Aragorn Dick-Read’s studio is lit up with bonfires in his handmade cast-iron fireballs. His studio remains open during the night for visitors from all over the world.

The traditional style that encapsulates the studio can be seen in their work, sometimes in cus- tom tiles depicting scenes from the sea, and other times designed as mini versions of Mr. Dick- Read’s fireballs.

Using a Japanese technique called “raku,” the pieces are removed from the kiln at about 1,000 degrees Celsius and placed into metal trash cans containing shredded paper. The can is covered and all the oxygen from the glaze is drawn out by the resulting fire to give the pottery a metallic look.

Ms. Entwistle has been work- ing in the studio for five years, and Ms. Crowley has been there for two years, but the name Aragorn’s Studio has been around since the 1980s.

Born in Tortola in 1966, Mr. Dick-Read was introduced to many artistic styles, but his favourite is sculpting in metal. His “fire sculptures” are trademarks of his work and can be seen throughout the territory and in many cities abroad.

Bamboushay Restaurant and Lounge recently re-opened in centre of Road Town, where visitors coming from cruise ships and the ferry terminal can stop by and have a drink. To the back of the establishment is the showroom, where Bamboushay pottery is on display and for sale.

Founded in 2001, the business operated a studio in Nanny Cay before it took some damage from Hurricane Irma in 2017. But the studio is getting back into shape and will offer pottery classes when open, potter Ramon Herrera Mariano said.

Painted on the wall behind Mr. Mariano, who worked on several pieces on the wheel, was the meaning of Bamboushay, which refers to a traditional dance performed to invoke good luck. On another wall in the studio is a quote that reads: “We pass to you the secrets, love, and tradition of generations through our pieces reflective of our beaches, mountains, landscapes, and culture.”

Mr. Mariano has been a potter for 25 years, and he says at Bamboushay, no two days are the same.

He recently finished an order from The Mad Dog, a yacht that attended the fall Charter Yacht Society Show in Nanny Cay. Four mugs with paw prints were on display in the kitchen of the boat.

It’s not unusual for Bamboushay to create several similar pieces, although no piece is the exact same. Mr. Mariano creates extra pieces for each order he gets and keeps them on file to display to clients.

As for the throwing of the clay, Mr. Mariano can create dozens of pieces in a day, one after the other, and follows a pattern for glazing and firing the pieces as well.

The designs on the pieces are created by stencil, but the sizes of the designs change depending on what customers want. Keeping similar templates gives Bamboushay a style that is recognisable throughout the territory, he said.