Shortly before leading a group of hikers into the bush at Brewers Bay, Mervin Hastings stood in front of sugar mill ruins and debunked the myth that the island of …

END_OF_DOCUMENT_TOKEN_TO_BE_REPLACED 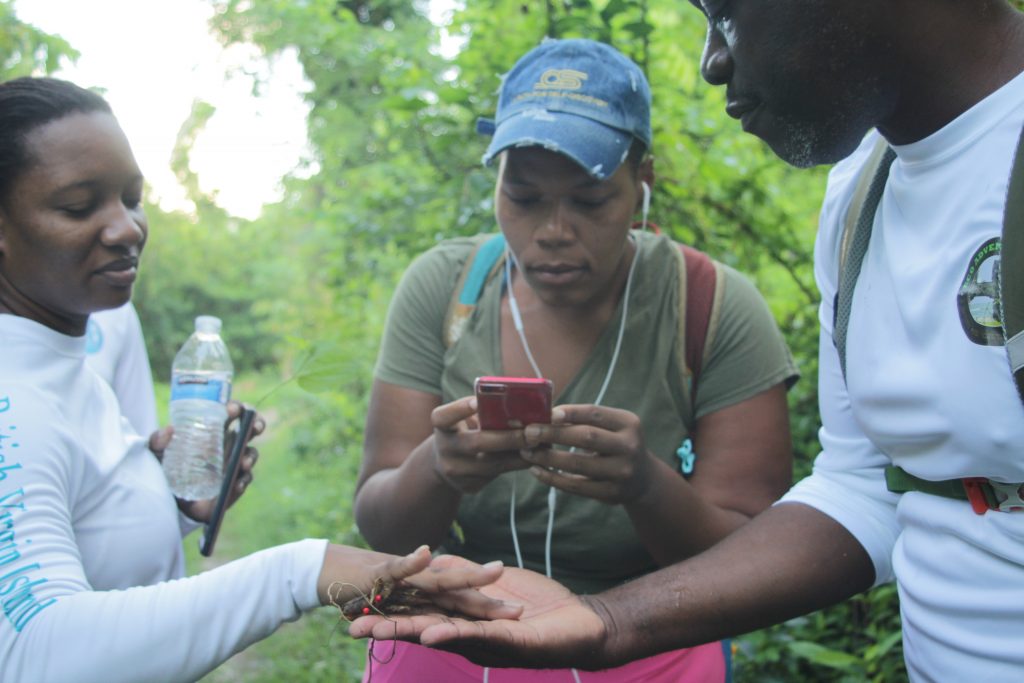 Guide Mervin Hastings shows guests of an Eco Adventures BVI tour the plant that holds “jumbie beads,” small seeds that are often used for decoration but are poisonous. Below, Mr. Hastings shows a crayfish from a small freshwater pond in Brewers Bay. (Photo: ZARRIN TASNIM AHMED)

Shortly before leading a group of hikers into the bush at Brewers Bay, Mervin Hastings stood in front of sugar mill ruins and debunked the myth that the island of Tortola got its name from the Spanish word for “turtle dove.”

“I always ask everyone, ‘How did Tortola get its name?’ It actually got its name from the Dutch. A small group of guys came over from St. Eustatius [in 1650] and captured Tortola, and they were the Dutch,” said Mr. Hastings, owner of Eco Adventures BVI, during a 2.46-kilometre “educational adventure” last week in Brewers Bay. “Most of them were from a little island in the northwest called Tholen. When they came, they said ‘New Land of Tholen’ or ‘Nieu ter Tholen.’ Later, it became ‘Ter Tholen.’ Later on, it became Tortola.”

Mr. Hastings prides himself on the educational tours he started offering this year after residents began taking an interest in the solo adventures that he would document with photographs and videos. Soon, he began bringing groups along with him.

Eventually, the tours gained so much traction that Mr. Hastings created a business called Eco Adventures BVI, which was born out of the Covid-19 pandemic and offers eight different hikes to people who want to explore Tortola.

He is among several tour guides who say they are experiencing a boom during the pandemic as residents unable to travel abroad take an increased interest in their home territory.

Mr. Hastings’ most popular hike goes through a pineapple farm and up a ghut in Brewers Bay before ending at a freshwater spring. Along the way, guests encounter wildlife like snakes and crayfish, fauna like “the poor man’s orchid” and “jumbie beads,” and fruits like sugar apple and soursop.

On a Thursday morning hike, which started just around the corner from the community centre in Brewers Bay at 6 a.m., Mr. Hastings began the tour by showing guests some ruins.

There were five sugar plantations in the area, and the sugarcane was used to brew rum, he said, adding, “Hence the name Brewers Bay.”

“What’s unique about this specific brewery here is that it’s quite well intact,” he said, pointing to a tall brick structure and the shrubs behind it.

Sailors from England would carry bricks in their ships to weigh the boat down, and those bricks were used to build the breweries and other buildings in Caribbean islands, Mr. Hastings explained. Going back, they used sugar and rum as ballast instead.

“The ones that came from Africa, the ballasts were us: humans,” he said. “We were the ballasts. They packed the slaves.”

Interspersing historical anecdotes with scientific explanations of plants and animals, Mr. Hastings shared his knowledge throughout the three-hour hike, where guests climbed 490 metres in elevation. First, they walked through land owned by Mr. Hastings’ family, where they passed ruins of structures like outhouses and distilleries.

“We still have big cauldrons that’s still in there,” he said. “So a lot of the equipment is still there. We still even have rollers in there. A lot of machinery is in there still.”

Sugarcane rollers, or crushers, were used to grind the juices out of the sugar cane. They look like big wheels and were mule- or slave-driven in the 17th and 18th centuries, when slavery still existed in the Virgin Islands. There was another roller nearby, but this one was made in the 19th Century.

Much VI history was lost between the late 1800s and early 1900s since very little was recorded after emancipation in 1834, Mr. Hastings explained, but it’s believed that Virgin Islanders took to farming, including sugarcane and cattle.

Another industry arose in the early 20th Century.

In 1919, the United States bought St. Thomas, St. Croix and St. John from the Dutch. Prohibition took effect the following year, and alcohol became illegal across the US.

“So people in St. Thomas, people in Tortola, were all one people,” Mr. Hastings said. “What happened — all the distilleries were there — the people came back, dust off all the cobweb after not using it for 60 years, and they started making rum. They started selling it and smuggling it to St. Thomas.”

A member of the tour group laughed.

“But that’s why the smuggling can’t stop: because they started in 1920!” he exclaimed.

Eventually, the hikers arrived at a pineapple farm run by Mr. Hastings’ family member. Young, red pineapples were growing from the ground while avocado, papaya, calabash and passionfruit were growing in trees and vines. Across from the farm, Mr. Hastings took the group into a ghut, where there were large rocks and a flowing stream of water.

He broke apart almonds, pointed out the “poor man’s orchid,” and called out for his favourite crayfish in a little pond, George. The movement of the adventurers scared most of the crayfish into hiding, however, and Mr. Hastings didn’t see George that day.

Eventually, the group reached the origin of the freshwater stream, where Mr. Hastings passed around cups made from calabash fruits, and each person took a turn drinking the spring water.

He also took the participants to a brick cistern that was built in the 1930s. He said that men often built such structures at night to stay cool, starting two days before a full moon to take advantage of the light.

They would sing songs and women would bring them soup during the middle of the night, he added. Now, the cistern remains, and the spring is the only freshwater on Tortola that continually flows year-round, Mr. Hastings said, adding that he would go there as a boy and fill up water for his family.

Mr. Hastings now works in the Environment and Climate Change Unit under the Ministry of Natural Resources, Labour and Immigration. He also leads a summer programme for students, which began under the Department of Conservation and Fisheries.

Mr. Hastings said he has been studying conservation biology since he was first hired as a Conservation and Fisheries trainee in 1990.

“I’m not the only person that does hikes,” he acknowledged. “I like to do more environmental education, local and invasive animals and plants, Virgin Islands history and culture, folktales and song, etcetera.”

A similar tour company called Hike BVI was also born out of the coronavirus pandemic, when founder and owner Sef Graham noticed people taking an interest in the adventures that he was going on. 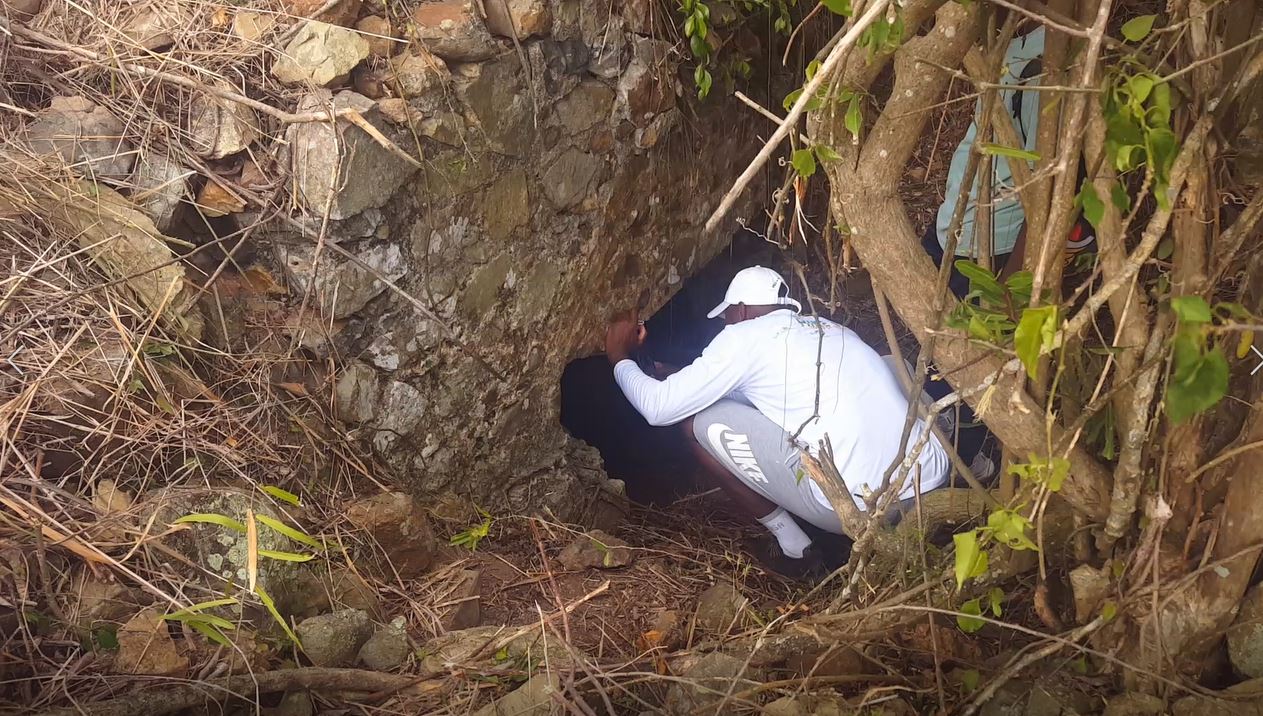 On a Friday morning hike at the end of August, Mr. Graham led 15 people up to Fort Charlotte above McNamara. Part of the fort still remains in the area, including a magazine bunker where he said ammo was stored.

In recent weeks (and likely in the weeks to come), Mr. Graham has also led excursions on Salt Island in partnership with Island Time Power Boats. In any given week, free of curfew and restrictions, Mr. Graham and his team of guides can host 20 hikes or more.

Heritage Tours BVI, which has been around since 2018, was also offering tours every weekend up until the most recent lockdown. Founder and owner Josh Langford, 21, is a tour guide by profession and is used to handling tourists.

“I enjoy touring locals, because that’s the main reason I started the company,” he said told Beacon on Monday. “Touring locals is a different aspect in being that you live amongst these people so you can’t have your information wrong.”

He began the company when he was a student at the H. Lavity Stoutt Community College, where he learned about VI history and various spots of interest across the territory. With the slogan “To educate the present of the past to impact the future,” his educational tours last between two and three hours.

During the pandemic, Mr. Langford noticed that residentsgot especially interested in thetours.