Business > Logo designers go back to the drawing board

Logo designers go back to the drawing board

END_OF_DOCUMENT_TOKEN_TO_BE_REPLACED 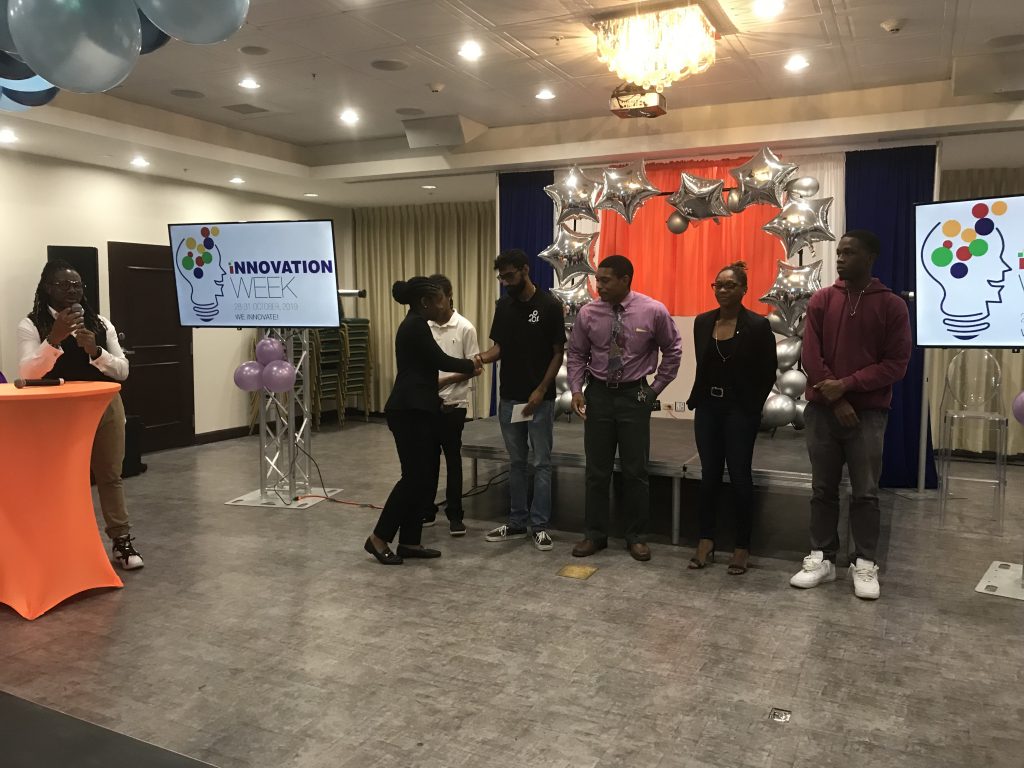 Competitors in the logo design competition for the upcoming Innovative Business Lab show off their designs at Maria’s by the Sea last Thursday. (Photo: CLAIRE SHEFCHIK)

The six young competitors who vied to design a logo for the government’s new Innovative Business Lab set to launch next year are getting a lesson in working for demanding clients.

After presenting their designs at a competition last Thursday at Maria’s by the Sea, they have been given two more weeks to work on their designs after judges sent them “back to the drawing board,” as emcee Kareem-Nelson Hull phrased it.

“It was sort of a ‘pop challenge,’” he explained to the audience. “We didn’t give them the luxury of one month, two months, three months.”

Some designers approached weren’t up to the challenge, he explained.
“These six decided ‘I’m going to do so,’” he said.

The innovation lab, which is designed to be an incubator for young entrepreneurs to grow their businesses, has been in the works for years.

Its 2020 opening date was announced Oct. 25 by Junior Minister for Trade and Economic Development Sharie de Castro, who headed up activities for this year’s Innovation Week.

Some entrants, who were judged by government Chief Information Officer Desiree Smith and marketing consultant Angelle Cameron, said they were given as little as 24 hours of notice to prepare their designs.

Although the judges said they valued the work the young designers put in, both said they weren’t satisfied with any of the final designs.

The judges suggested that participants strive be truer to the spirit of the week by thinking about the meaning of the word “innovation” and considering the possibilities for using the logo on t-shirts, letterheads, business cards and other merchandise.

They also advised competitors to avoid the “lightbulb” trope that many of them incorporated.

“Once you think of something for the first time, likely someone thought of that as well,” Ms. Smith said.

Added Ms. Cameron, “I think about, how do we make this come to life for the client? How do I put this on the notepad or a phone case? How do I make it change into something else or jump?”

The designers all told the judges they would choose to continue with the contest.

“I think it makes a lot of sense: It will give us more time to think and be more relaxed,” said designer and animator Christo pher Kissoon.

He added that the judges’ critiques were valuable and that he would take them into consideration.

“This was really last minute, so I like that we have extra time to really sit and do some- thing and fiddle with it and actually have time to switch things up and get feedback from friends and family,” he said.

Ms. de Castro said she would meet with the contestants as a group and play the role of the “client” to give them a better idea of what she is looking for.

“We have some very talented and innovative graphic designers in this room,” she told the contestants. “You guys are all winners in my book, and we look forward to seeing what other opportunities arise and doors that will open at the lab.”