Government leaders said last week that they hope to ease the burden of rising costs for food, gas and other resources by slashing import duties. But they urged business owners …

END_OF_DOCUMENT_TOKEN_TO_BE_REPLACED 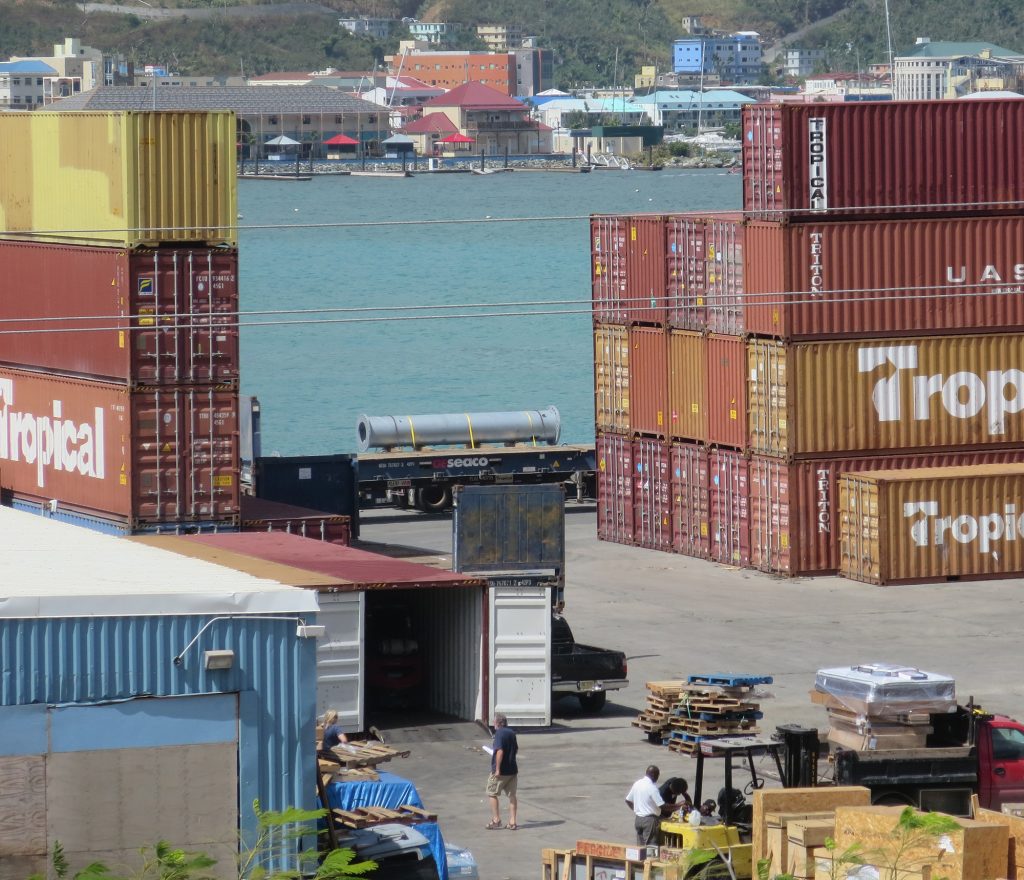 Premier Andrew Fahie announced on March 25 that import duties will be cut to five percent across the board for items like food, construction materials and vehicles. Fuel import duties will also be reduced by 50 percent, he said. Above, workers move cargo from stacked containers at the BVI Ports Authority facility at Port Purcell. (File photo: CLAIRE SHEFCHIK)

Government leaders said last week that they hope to ease the burden of rising costs for food, gas and other resources by slashing import duties. But they urged business owners to pass those savings along to customers.

“This initiative will go a long way in helping the people of the Virgin Islands to better deal with the economic struggles they may be facing at this time,” Premier Andrew Fahie said March 25 during a press conference.

Government plans to propose in Cabinet that all customs duties be lowered to five percent for three months beginning April 15, he said.

Also during the March 25 press conference, Mr. Fahie and Natural Resources, Labour and Immigration Minister Vincent Wheatley addressed work permit delays, the millions spent on legal fees for the Commission of Inquiry, and other topics.

In speaking about the need for the duty cuts, the premier again strongly condemned Russia’s invasion of Ukraine. He also thanked Amanda Milling, the United Kingdom minister responsible for the overseas territories, for recently visiting the territory to discuss sanctions against Russia and how the conflict is affecting the global economy.

“The price of almost every commodity — especially imported goods and by extension services as well — in all parts of the world is increasing, and this is also contributing to rising inflation,” Mr. Fahie said. “We in the Virgin Islands are no exception to these impacts.”

While both private citizens and business owners stand to benefit from the duty cuts, Mr. Fahie asked that the private sector pass any savings to customers to promote economic activity throughout the territory.

The Department of Trade, Investment Promotion and Consumer Affairs and other government agencies will conduct “monitoring exercises” to ensure savings are passed on to consumers, Mr. Fahie said.

A task force recently assessed possible price gouging in the territory, and though the premier said he would wait for its full report, he noted that the team “found some areas of concern.” However, he said all businesses contacted by the team cooperated fully, and all those issues were rectified.

Mr. Fahie also encouraged businesses in the supply sector to familiarise themselves with the Public Procurement Act 2021 “so that they will have a better chance of being successful in winning bids and contributing positively to the economy of the Virgin Islands.”

“This should give our people some relief at the gas pumps and in their pockets,” he said.

“The crisis is pointing us in the direction of changes that we knew would come, but we are seeing where everything is saying these changes would become more urgent sooner than everyone had previously anticipated,” Mr. Fahie said.

The premier also gave updates on efforts to make home ownership more affordable for belongers given the current economic climate.

The House of Assembly recently passed the Stamp Duty (Amendment) Act 2022 to extend a duty exemption for first-time homeowners buying land. Mr. Fahie said at its passage that the government would be in conversation with major banks to help Virgin Islanders with securing favourable lending terms, such as 100 percent financing for buying property.

He said on March 25 that banks were responding “tremendously well” so far.

Mr. Fahie also noted that anyone who has outstanding property taxes can take advantage of an amnesty programme running from March 1 to Feb. 28, 2023. Though the principal amount is still payable, the accrued interest may be waived by the Inland Revenue Department, he said.

He also encouraged residents “to make every effort to access this incentive and to reap the maximum benefits from this measure.”

Mr. Fahie also provided a brief update on Ms. Milling’s visit, which he said built “on the genuine efforts being made on both sides to restore the modern partnership between the Virgin Islands and the United Kingdom.”

Their teams only briefly discussed the Commission of Inquiry, he said.

“The minister and I did not have any substantive discussion about it, except to note that the report would be completed in April,” he added.

In answer to a question from a reporter, Mr. Fahie also said that costs associated with the inquiry had taken a toll on government finances and may have exceeded $5 million.

“The exact figure, when the time comes, I will give, because it’s something that continues,” he said. Last August, Mr. Fahie had said government already had paid more than $3 million to the law firm Withersworldwide for representation during the inquiry, but he promised that payments to the firm wouldn’t exceed $5 million overall.

However, he said on March 25 that the government had to continue paying when the inquiry was extended.

The premier also summarised progress made on legislative efforts designed to improve governance in the territory. For instance, he said the government is receiving nominations for the Integrity Commission established under the recently passed Integrity in Public Life Act, and he anticipated it would be functional in about a month.

For the VI Trade Commission, he said board members would soon be appointed.

The Trade Commission Act forming the commission passed in June 2020, along with the Consumer Protection Act.

Mr. Fahie said the post of contractor general would also likely be filled within a month. The contractor general, a post created under a bill that passed in June 2021, will be tasked with running an independent office to oversee and investigate how government contracts are awarded in the VI.

“Numerous persons have applied, and we thank them for offering their services,” the premier added.

Mr. Fahie said leaders are also working to expedite other good-governance legislation including a Human Rights Commission Act, amendments to the Registrar of Interests Act, and a freedom of information act.