Business > Making a will won’t kill you, says FSC panel

Making a will won’t kill you, says FSC panel

When Judy Varlack-Pickering’s husband died, he didn’t have a will. Still, she thought everything would work out smoothly “because he was my husband.” She soon received a rude shock. “When …

END_OF_DOCUMENT_TOKEN_TO_BE_REPLACED 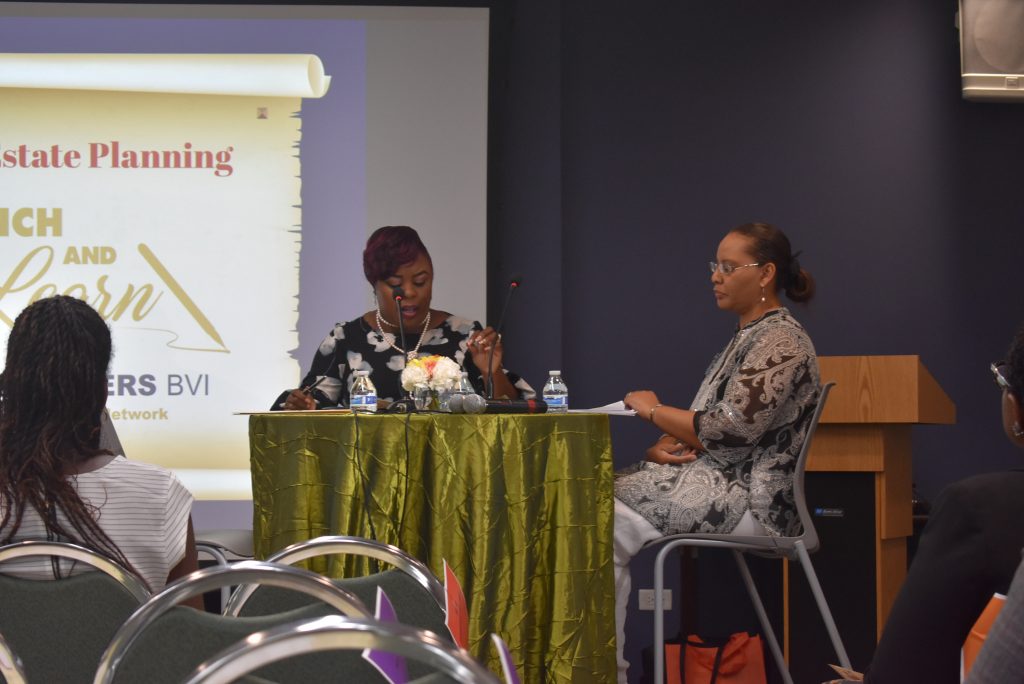 Karia Christopher, director of trade and consumer affairs speaks with Lisa Penn- Lettsome, senior counsel in the global finance and corporate groups at Walkers, for a seminar on wills and estate planning through Money Matters BVI. (Photo: CLAIRE SHEFCHIK)

When Judy Varlack-Pickering’s husband died, he didn’t have a will. Still, she thought everything would work out smoothly “because he was my husband.”
She soon received a rude shock.

“When the lawyer called me and asked me, ‘Did your husband make a will?’ I said no, he didn’t,” Ms. Varlack-Pickering recalled. “She said, ‘Well, we gotta act quickly, because if there was no will then you could have a problem with the family.’”

Ms. Varlack-Pickering soon found herself in court trying to get her name on her husband’s estate, a process that took five months.

Now she wants to spread the word and has teamed up with Money Matters BVI, the education arm of the Financial Services Commission, which has presented a series of video testimonies on the value of estate planning.

“He should have left a will so I would not have had to go through all that,” said Ms. Varlack-Pickering, adding that she now knows that “to make a will will not kill you.”

Karia Christopher, director of trade and consumer affairs, who moderated the organisation’s “lunch and learn” session about wills and estate planning this month along with a panel of lawyers, said that she has occasionally noticed a superstitious attitude about wills among Virgin Islands residents.

“‘When I die, let them figure it out,’” she said, paraphrasing what she explained is a common attitude. “‘Let them fight over it.’”

Panel member Lisa Penn-Lettsome, senior counsel in the global finance and corporate groups at Walkers, was quick to dismiss this idea.

“I actually advise everyone to have a will — even people who think they don’t have anything,” she said. “My primary reason is ease of administering the estate.”

VI probate rules make it a cumbersome process to get letters of administration from the court, she explained, because of the order of succession the law requires for those who die without wills.

“If you do not leave a will, the law will assume your surviving spouse will be first entitled” even if you would prefer your children or other family members to come first, she said. “You have to clear off all the people above you who are entitled and they have to explain why they aren’t applying.”

That can include assembling mountains of paperwork, including birth and death certificates. But a will can override that, making the process smoother.
What if someone doesn’t have any property or assets? What’s the point of making a will?

“Apart from not wanting to discuss the topic, they say, ‘I don’t have anything,’” said Ms. Penn-Lettsome. “And that’s not true because you can die and you don’t know who has left something for you before you died. … It could be a million dollars; it could be a piece of land.”

Estate planning offers other options too. For example, there’s also a document called a “letter of wishes,” allowing the client to leave certain items — such as jewellery or small trinkets — to certain people. It’s not legally binding but can be changed as often as you want.

“There is a lot of flexibility you have,” she said.

Alivern Smith-Harrigan, a business owner, said she made a will “to avoid confusion” in distributing her property, bank account and business assets.

“It’s best that you make it legal,” she said, adding that it was important to her to delineate exactly who would get what. “You say who will be inheriting property versus bank accounts.

Having achieved peace of mind with her own will, she’s now encouraging her children to make wills in order to help future generations of her family.

“I would like to see those children protect their children,” she said.