Chantel Malone finished just outside the medals with the Virgin Islands best showing at the 23rd CAC Sr. Track and Field Championships that wrapped up Sunday in Mayaguez, Puerto Rico. …

END_OF_DOCUMENT_TOKEN_TO_BE_REPLACED 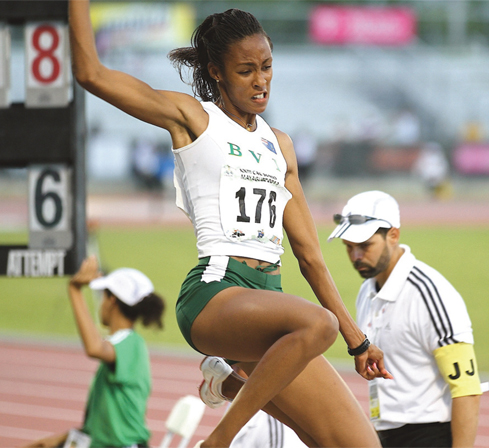 Chantel Malone finished just outside the medals with the Virgin Islands best showing at the 23rd CAC Sr. Track and Field Championships that wrapped up Sunday in Mayaguez, Puerto Rico.

On her fifth attempt, Ms. Malone cut the sand at 6.23 metres in the competition won by the Bahamas Bianca Stuart, who unleashed a fifth round leap of 6.81 metres that equaled the championships record established by Jamaica’s Elva Goulbourne set in 2003 in Grenada. Her mark is also a Bahamas national record.

Ashley Kelly was the territory’s other finalist and was sixth in the 400 metres. Ms. Kelly got to the line in second place in her 400-metre heat by running 53.40 seconds to advance then ran 54.00 seconds from lane eight for her sixth place showing in the final.

Sprinter Karene King turned in a time of 24.76 seconds in her 200-metre heat while Britney Wattley ran 25.85 seconds as neither advanced to the final.

Darnetia Robinson—who like Wattley will compete at the Pan Am Junior Championships in Miramar, Florida this weekend had a non-advancing 12.23 seconds in her 100-metre race.

Omar Jones through 49.95 metres in the javelin throw and placed 14th, while Keron Stoute cleared the bar at 2.05 metres to finish 12th in the high jump.

The officials include Ralston Henry, Ericca Frederick and Xavier Samuels.

VI sprinter and Olympian Tahesia Harrigan-Scott was scheduled to compete in the CACAC games and defend her 100-metre title. But due to “personal reasons” was unable to make the trip to Puerto Rico.

“My goal of possibly being the first woman to win their respective event three consecutive times is not going to happen,” Ms. Harrigan-Scott wrote in a statement sent out by Digicel on July 14. “I am really sad that I am unable to go to the CAC Championships to compete, but I know that we have seven other athletes who are going represent our country well.”