COVID-19 > ‘Manage It’ phase in effect as Covid spikes

‘Manage It’ phase in effect as Covid spikes

Twenty-one more cases of Covid-19 have been detected throughout the territory in the past seven days, briefly shutting down two police stations after officers tested positive and prompting leaders to …

END_OF_DOCUMENT_TOKEN_TO_BE_REPLACED 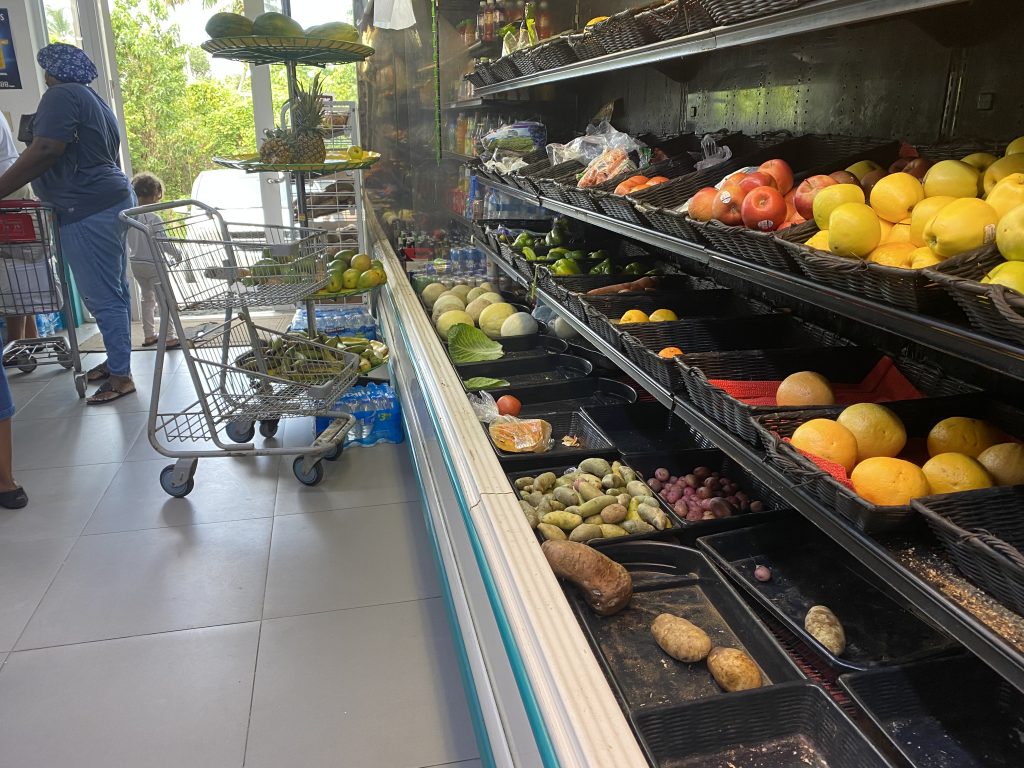 Shelves at grocery stores quickly emptied on Monday, when residents rushed to stock up on supplies after Premier Andrew Fahie hinted at a full lockdown that never came. On Sunday, the Road Town and East End/Long Look police stations temporarily closed after police officers tested positive for the virus, but they had reopened by Tuesday evening. The station in Cane Garden Bay, below, displayed a sign that said “no service” on Monday. (Photo: DANA KAMPA)

Twenty-one more cases of Covid-19 have been detected throughout the territory in the past seven days, briefly shutting down two police stations after officers tested positive and prompting leaders to tighten curfew to contain community spread of the disease.

The new curfew order requires everyone except essential workers to remain at home between 1 p.m. and 5 a.m. until Sept. 16, and it closes most businesses except for a few exempted categories like grocery stores, hardware stores, and restaurants offering takeout only.

As of Beacon press time Wednesday afternoon, the Virgin Islands had confirmed a total of 47 confirmed cases, 38 of which remained active.

“We believe that we are seeing the tip of the iceberg and there are more people possibly infected in the population who are asymptomatic and can readily spread the disease, which means that we may have many undocumented cases who are transmitting the virus,” said Health and Social Development Minister Carvin Malone, who addressed the territory along with Governor Gus Jaspert and Premier Andrew Fahie on Tuesday morning. “While we don’t exactly know how much spread is caused by our asymptomatic group, current estimates place our undocumented cases at approximately 1,482 persons at a minimum.”

As of Tuesday, Mr. Malone said government had conducted tests on 3,027 people, with 2,965 negative results, 47 positive results, and 15 results pending. Seventy percent of the new cases were found through contact tracing, and 32 percent of all confirmed cases have been asymptomatic, he added.

The spike in confirmed cases happened rapidly over the course of the past month. Prior to Aug. 1, there were only eight confirmed cases in the territory, resulting in one death, and no case had been confirmed since May 14.

The ninth case was detected on Aug. 1, and on Aug. 17 Mr. Malone announced two more active cases, bringing the total number of cases to 11.

Last Thursday, government urged anyone who visited visited Ramon’s Bar, The Vault, The Edge, The Avenue and bars in Fat Hogs Bay and Paraquita Bay between Aug. 15 and 22 to call the medical hotline and get tested to facilitate contact tracing.

“I am reporting that a total of 529 persons were tested from [Aug. 25-27],” he said. “These persons were mainly comprised of primary and secondary contacts of recently identified cases 12 through 26.”

At the time, the total number of cases came to 35 out of 2,853 people tested in total. He also announced that all of the 292 tests taken on Anegada recently returned negative.

Two people with Covid-19 were hospitalised, but Mr. Malone said they didn’t contract the coronavirus at bars, nightclubs or other gatherings.

“There were the unfortunate primary contacts of persons who engaged in mass gathering events,” he said. “Then there are others who unwittingly contracted it through household contact or work colleagues.”

Over the weekend, rumours circulated on social media that police officers had contracted the virus. The rumours were confirmed on Sunday when Mr. Jaspert announced that 12 more positive test results were reported on Friday and Saturday, including members of the Royal Virgin Islands Police Force.

“In order to minimise risk, the East End/Long Look and the Road Town stations will be temporarily closed for deep cleaning and disinfection,” he said. “However, other police resources have been put in place to ensure adequate coverage to protect those communities, enforce the curfew and maintain general law and order.”

By Tuesday evening, both stations had re-opened, according to Police Information Officer Akia Thomas. The total number of positive cases stood at 47, where it remained as of Beacon press time yesterday afternoon.

On Sunday evening, Mr. Fahie released a statement acknowledging that residents “are concerned about the growing number of Covid-19 cases” and said that the House of Assembly held an “informal meeting” to discuss a more stringent curfew.

The meeting — which he said all HOA members attended — was held virtually and wasn’t announced until Mr. Fahie’s statement.

“Other recommendations from the majority of members included, but were not limited to, the immediate implementation of a new 24-hour curfew of the territory for a minimum of 14 consecutive days,” he stated. “Other options for a new curfew offer were also explored.”

He added that the discussions from the informal meeting would be carried into a Cabinet meeting the following day and that an official announcement would follow.

In a panic, residents took to social media to spread the news and many went shopping during limited business hours on Monday while waiting for an official announcement.

Cabinet didn’t meet until 4 p.m. that day, and later in the night announced that an official statement would be broadcast the following morning.

Mr. Malone said Tuesday morning that although a 24-hour lockdown “would have been a preferred effective approach” to stop the spread of the virus, a more “balanced view” of the social and economic effects of such a measure was taken into consideration. He also announced that the territory is now in the orange “Manage It” phase of the territory’s Pandemic Response Plan. This phase acknowledges a rise in cases and aims to minimise active transmission.

“In the absence of a strategy that would completely eradicate the virus from our shores, we have transitioned to the ‘Manage It’ Orange Alert phase of our pandemic response,” Mr. Malone explained.

On Tuesday morning, Messrs. Jaspert, Malone and Fahie all stressed the importance of adhering to health and safety measures to help stop the spread of the virus.

“Individuals must play their part by taking measures to protect themselves and others – stay at least six feet apart from others, clean your hands regularly, practise respiratory etiquette, and wear a face mask,” Mr. Malone said.

He also signed a new Public Health (Covid-19 Control and Suppression Measures) Order allowing police officers to fine violators on the spot, effectively taking away a verbal warning for a first offence. The order was Gazetted Tuesday night.

Mr. Jaspert said government would enhance police enforcement and increase the presence of the “Social Monitoring Task Force” at establishments to enforce the order.

“There will be a zero-tolerance policy for individuals or businesses breaking the rules. The law is being changed to remove warnings for first offences,” he said. “If you are found to be breaking the curfew or failing to wear a face mask or social distance, you could be issued a fine on the spot — $100 for individuals and $1,000 for businesses. Businesses can risk being shut down if they fail to enforce social distancing measures or open without authorisation.”

He added that in order to support the Social Monitoring Task Force, members of the public service will be reassigned to meet the new demands for social monitoring, public health planning and overall Covid-19 response.

“They will hold responsibility for enforcing the measures and monitoring compliance,” Mr. Jaspert said.