Along the coastline of Prickly Pear Island is a stretch of mangroves that died after retaining too much salt following the hurricanes of 2017. But the area has a chance …

END_OF_DOCUMENT_TOKEN_TO_BE_REPLACED 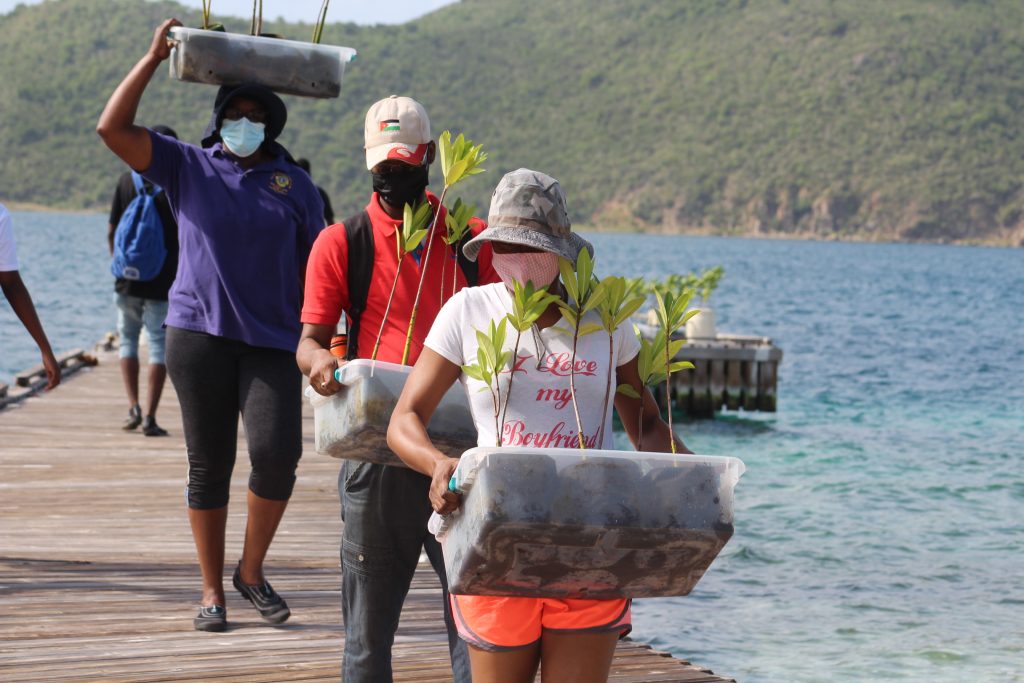 Along the coastline of Prickly Pear Island is a stretch of mangroves that died after retaining too much salt following the hurricanes of 2017.

But the area has a chance at revival with the help of community organisations that planted 143 seedlings there last month.

Dawn broke the horizon beyond Spanish Town and rain clouds moved toward North Sound as members of the National Parks Trust and the H. Lavity Stoutt Community College Mangrove Nursery team travelled from Beef Island to Virgin Gorda on Oct. 2.

They made their way to Leverick Bay, where the team was joined by NPT Director Dr. Cassander Titley-O’Neal; Natural, Resources, Labour and Immigration Minister Vincent Wheatley; and Attorney General Dawn Smith.

The nursery team and trust members transported the 1-year-old red mangrove seedlings into the boat Just Sippin’ before embarking in groups for Prickly Pear Island, which is a national park.

Dead Chest, Sandy Spit, Great Tobago, Sandy Cay, and some of The Dogs are also whole-island parks, according to Dr. Titley-O’Neal.

They are often used by birds as migratory routes, and they host other diverse wildlife as well.

On the day of the planting on Prickly Pear, an eagle ray was feeding close to the shore and two scarlet ibises hunted for food in the island’s salt pond.

The mangrove restoration is one of the projects undertaken by the International Union for Conservation of Nature under a $450,000 grant from the United Kingdom government’s Darwin Plus Initiative.

The Jost Van Dykes Preservation Society and NPTVI are technical partners that carry out feasibility operations for such projects, including the mangrove restoration.

On the day of the planting, organisers brought in the mangrove team — which grows red mangrove seedlings at the HLSCC nursery and coordinates volunteers in its efforts — to help with the restoration of the Prickly Pear coastline.

“The mandate from the board is that we want to establish the entire coast of Prickly Pear [with mangroves],” Dr. Titley-O’Neal explained. “Today is not the only time we’ll be here.”

The seedlings were planted in an area representing just a fraction of the coast. More planting needs to be done, and the NPT also plans to build a fence to prevent goats from grazing on the seedlings.

“It is going to take us a while, but what’s comforting is that we have students who want to continue with the efforts,” Dr. Titley-O’Neal said.

Students from Bregado Flax Educational Centre and members of the Lions and Leo clubs joined the mangrove team that day, grabbing bags of seedlings and planting them in the sandy shores.

‘Little piece of the puzzle’

Susan Zaluski, head of the mangrove nursery team, gave some background and instructions to the two dozen volunteers who gathered around the mangrove seedlings near the Prickly Pear dock.

“This is just a little piece of the puzzle today,” Ms. Zaluski told the students. “Some of these plants that you have right here are a year old. So it took us an entire year of captivity to build these plants. When we plant them, they don’t all survive, because that’s just what happens in the wild.”

Previously, PVC pipes have been used for planting the seedlings, but that method was suffocating the plants and preventing them from shooting out. The team now uses biodegradable bags to start growing the seedlings.

“We’re trying to experiment,” Ms. Zaluski said. “So far what we’re finding is that the bag method is a lot more work at the nursery but a 90 percent chance of survival.”

During the planting, the nursery team discussed the pros and cons of how mangroves are planted. They noticed that seedlings that previously had been directly planted in the mud fared better than the ones that were planted with the bag, Ms. Zaluski said.

Educating the public about the work done by the mangrove nursery team and the importance of mangroves remains important for the cause, Dr. Titley-O’Neal explained.

Soon, the NPT plans to launch material aimed at educating children about mangroves. The team already works with the Youth Empowerment Project frequently.

In 2018, following a rapid assessment of hurricane-damaged mangroves across the territory, the JVDPS established a pilot mangrove nursery on JVD with support from Birds Caribbean and the University of New Hampshire.

In 2019, the JVDPS signed a memorandum of understanding with HLSCC to share technical expertise, leading to the launch of the national mangrove nursery.

The same year, the Ministry of Natural Resources, Labour and Immigration; the IUCN; and the NPT conducted feasibility assessments for restoring damaged mangroves.

The nursery is funded by Unite BVI, which recently donated $125,000 to be disbursed over the course of two years.