On the eastern end of Jost Van Dyke, where sunshine beats down on expansive white beaches, is a quiet little inlet. The pool is sheltered from crashing waves by a …

END_OF_DOCUMENT_TOKEN_TO_BE_REPLACED 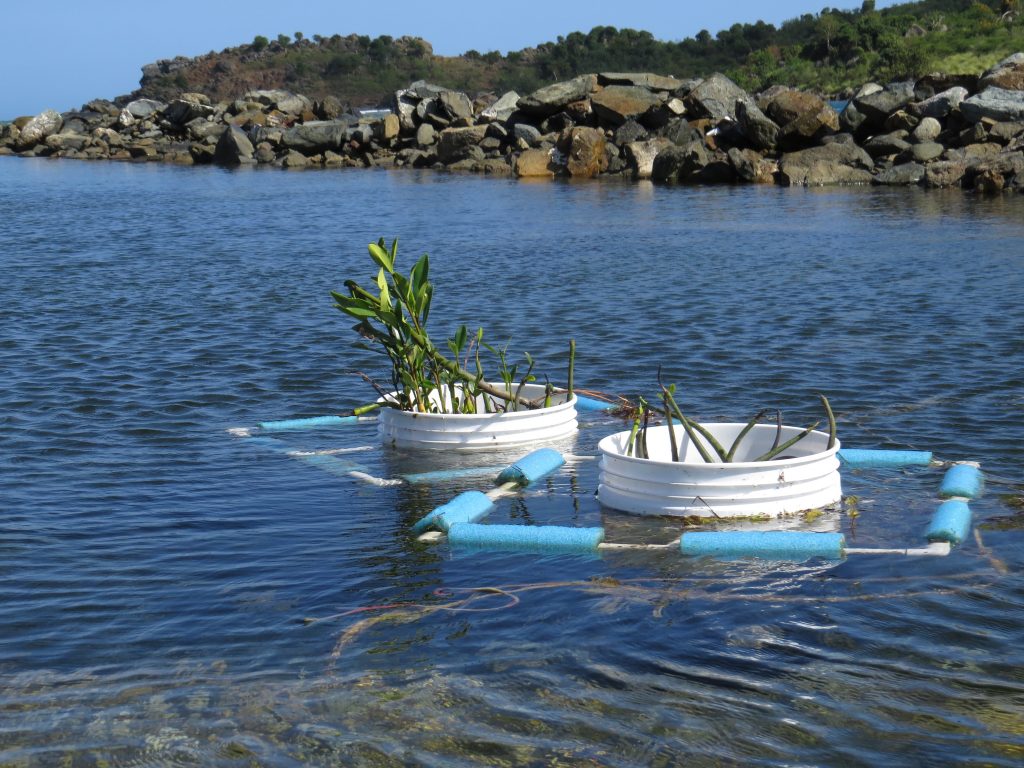 New funding from the Governor’s Office is aiding a partnership between the Department of Disaster Management and the Jost Van Dykes Preservation Society to rehabilitate mangrove forests, starting with a nursery on the eastern end of Jost Van Dyke. (Photo: DANA KAMPA)

On the eastern end of Jost Van Dyke, where sunshine beats down on expansive white beaches, is a quiet little inlet. The pool is sheltered from crashing waves by a line of spray-soaked boulders.

New efforts are under way to restore mangroves in the Virgin Islands, especially where previously healthy forests were damaged by the 2017 hurricanes.

With new funding from the Governor’s Office, a team of researchers is taking the lead in giving seedlings a better shot at growing to maturity.

Conservation scientist Dr. Louise Soanes, a consultant to the Department of Disaster Management on the SMART Communities Project, said the funding helped supply materials for needed habitat structures, working in tandem with other community-based restoration efforts.

The mangrove replanting is part of a larger effort, called “Establishing Flood-Resilient SMART Communities through Non-Government Partnerships,” to help residents be better prepared for natural disasters. This nearly $1.2 million project began in June 2017 and focuses on Jost Van Dyke as well as Sea Cows Bay, East End and Long Look on Tortola.

Ms. Zaluski said the project was stuck in the planning stages for a long time, “but it’s now finally getting off the ground and coming to fruition.”

A large part of the restoration involves harvesting mangrove seed pods from other locations where they are more abundant, allowing them to grow in the waters of the inlet, and then planting them in biodegradable containers with a mix of sand, mud from the mangrove forests, and seawater.

The pods don’t appear to be much more than boomerang-like twigs, but they carry the power to kickstart an ecosystem. The mangrove’s submerged roots provide protection for juvenile fish and strengthen shorelines by helping keep soil in place that would otherwise be carried away by the wind and waves. The forests’ intertwined foliage also acts as a windbreaker that protects coastal homes and other structures from severe storms.

After they sprout, the seedlings are given a chance to grow larger while protected from the intense heat on the shoreline inside a screened-off 12-foot- by-12-foot building called the shade house.

“The idea of a shade house is when you have a mangrove system, there’s a natural canopy for the forest,” Ms. Zaluski said. “So the young seedlings grow up in that canopy. This is basically mimicking that.”

Last December, students from the Youth Empowerment Project helped transfer the young mangroves from their water-based nursery to the containers in the shade house.

“Actually, it was good because the kids came in and were like, ‘Woah, look how much they’ve grown.’ I see them every couple of days, so I don’t think about it. It was good to see that they recognised that they’ve grown,” Ms. Zaluski said.

She added that this hands-on approach not only provides a fun day in the field for the kids, but also plants the seed for caring about environmental conservation in the future.

The seedlings come from areas throughout the VI. A dozen seedlings at the shade house that day came from Paraquita Bay. Ms. Zaluski said a lot goes into deciding where to harvest and later replant the seeds.

“It is a shock to the system, so they don’t always survive,” Ms. Zaluski said. “We’ve lost a couple, but then we pruned off the tops of the leaves, and you can actually see that they’re starting [to recover].”

The project is showing promise early.

“In some of our buckets, we had as many as 95 percent of the seedlings grow, which is pretty good,” she said.

As many home gardeners know, replanting isn’t always successful either. But Ms. Zaluski said the important part of the work at this stage is giving the mangrove seedlings the best shot possible at surviving in a new area.

If enough trees take root, the new forest will be established, and nature can take its course.

“Apart from being able to replace the damaged mangroves that were damaged in the hurricanes of 2017, should we have another occurrence of a hurricane, we will replace those mangroves at a faster rate in the future,” Mr. Wheatley said at the signing, according to a press release.

Some restoration techniques work better than others, depending on the shoreline. Ms. Zaluski said the more time-consuming “Riley encased method” — placing plants in a container instead of just planting them in the ground — is best for beaches where conventional planting doesn’t work.

Researchers place the seedlings into PVC pipes before planting them along shorelines where there are strong waves. The VI team recently started experimenting with using a diluted concrete mixture to house the young trees, which they should be able to break out of as they grow.

“The idea is when you do the Riley encased method, if you stick the propagule directly in [the soil], naturally some of those seeds aren’t going to take,” Ms. Zaluski said. “But if you sprout them in a bucket first, and then you put them in, maybe they would get better recruitment. But a lot of it is having the time to analyse the problems and figure out what it is that you need to adapt.”

Dr. Soanes said replanting can also be easy in some situations.

“Behind YEP, there’s a lot of white mangroves growing right next to each other, and they’re not going to survive that close to each other,” Dr. Soanes said, explaining that as they crowd one another out for the most sunlight, some naturally die off. “So when they’re small, you can carefully take them out and just reposition them.”

Ms. Zaluski said the lone white mangrove currently in the shade house made it there because she found it growing amid concrete in a parking lot at Paraquita Bay, and she wanted to at least give it a shot at surviving.

As part of her consultant work with DDM, Dr. Soanes is researching what works in other areas of the Caribbean.

Ms. Zaluski said based on reports from other islands, the shade house they built on Jost Van Dyke in October and started stocking in December is capable of housing many more plants.

“There was a major restoration project in Saint Lucia, and their shade house is 12 by 14,” she said.

Saint Lucia’s Ma Kôté mangrove forest is the largest in the Eastern Caribbean, but it recently has sustained severe damaged due to poor water circulation. The Nature Conservancy, a global conservation charity organisation, said roughly 10 percent of the forest’s mangroves died as a result. Community members came together in recent years to pursue a major restoration effort.

The conservancy said volunteers, scientists and government agencies planted about 4,000 mangrove seedlings in recent years, and they expect to see the forest fully recover.

“You can see that we only have 40 or 50 plants here now, but if we build a couple shelves we could easily accommodate several hundred at a time,” Ms. Zaluski said.

Plans are in place to build a slightly larger shade house at HLSCC and a small-scale house for the Youth Empowerment Project’s after-school programme.

“You can really customise it to whatever your needs are,” she said.

Having well-established mangrove forests can also be a stopgap solution for areas hit hard by coral bleaching, according to researchers.

A study by the University of Queensland that was published last year indicates that healthy mangroves can help fight the consequences of climate change on coral reef fisheries. As corals die off from rising ocean temperatures, fish and other aquatic animals lose complex habitat structures that are especially vital as hiding places for young fish from predators.

There are some big obstacles for the long-term rehabilitation of the VI’s mangroves. Ms. Zaluski said red mangroves tend to grow closer to the water than white and black mangroves. Because of this, when streets are built too close to the shore, the latter two species run out of room to grow between the water and the road.

Dr. Soanes said this issue will only get worse as sea levels rise.

“There needs to be space for them to migrate upwards,” she said, noting that Sea Cows Bay is a particular area of concern. “It’ll be interesting to see what happens with that.”

Dr. Soanes said there are useful ways for volunteers to support the restoration. While she doesn’t recommend that people take replanting into their own hands, especially given the specific conditions that some species of mangroves require to thrive, residents can still get involved.

One important step is clearing away remaining debris from the hurricanes, she said. For example, a sheet of galvanised roofing can take up a lot of room where mangrove seeds could otherwise grow.

“With the mangroves, the first part of restoration is going to be getting all of that debris out,” Ms. Zaluski said.

Many community clean-up efforts after Irma were focused on clearing roads and public places. She hopes that more energy can now go toward helping key mangrove forests.

Dr. Soanes also noted that dead mangroves, though not as picturesque a lush foliage, still benefit the shoreline. The twisted trunks offer some needed shade to seedlings when they’re little (serving the same role as the shade houses), and then the trees can grow into the full sunlight they require. The roots also offer some protection from shoreline erosion.