Nine months after Hurricane Irma, the police headquarters in Road Town stands abandoned as a concrete shell with few windows and no roof. Many other police stations in the Virgin …

END_OF_DOCUMENT_TOKEN_TO_BE_REPLACED 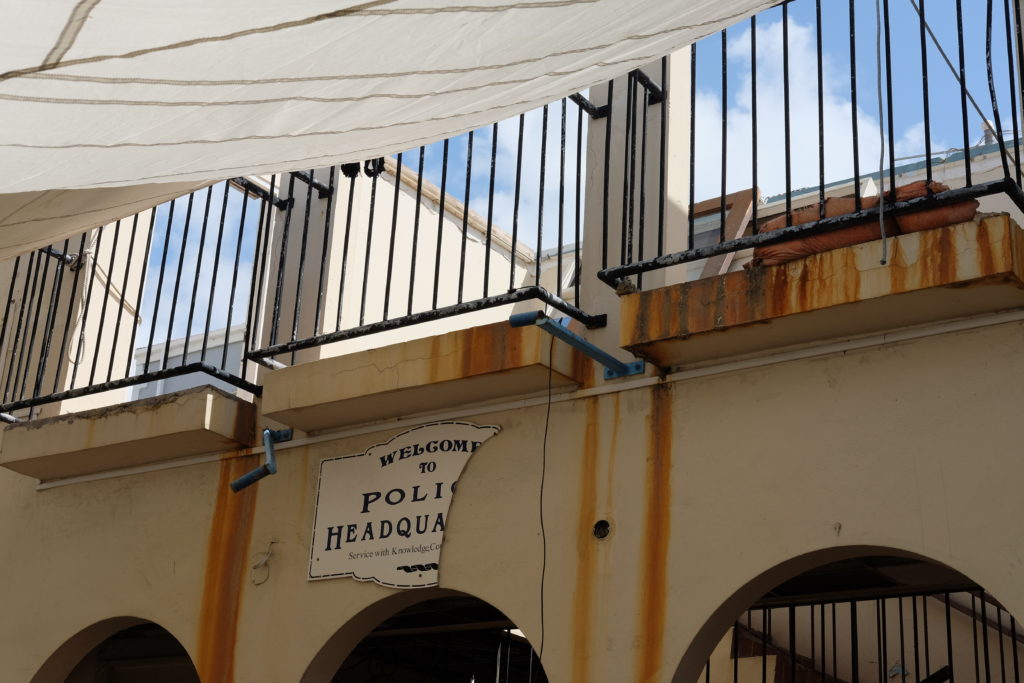 The police headquarters in Road Town (pictured last week) has reportedly undergone “minor repairs” since Hurricane Irma, but the building is still missing its roof and most windows. (Photo: AMANDA ULRICH)

Nine months after Hurricane Irma, the police headquarters in Road Town stands abandoned as a concrete shell with few windows and no roof.

Many other police stations in the Virgin Islands are in a similar state, and some have not undergone any repairs at all since the storm, including the East End, Virgin Gorda and Jost Van Dyke locations — the latter of which was “completely destroyed,” according to Police Commissioner Michael Matthews.

In an April sitting of the Standing Finance Committee, which is closed to the public, Mr. Matthews detailed specific damage to police force infrastructure and the lack of necessary repairs at many stations territory-wide, according to a report on the SFC proceedings.

Meanwhile, the police force’s annual operating costs will also likely rise by millions of dollars in the next three years.

Last year, the approved budget for the Royal Virgin Islands Police Force was a little over $16.7 million. The estimated budget for 2018 is about $18.5 million.

According to the SFC report, Mr. Matthews said the “reconstruction of the police estate remains an urgent priority and requires allocated funding.”

“The force is like most of the public and private sector in the territory [in that it is] not fully back on its feet yet, but this is a difficult message to sell with significant public expectation that it will respond to all things as normal,” he said, according to the report.

In January, the commissioner announced that the United Kingdom government had agreed to give the RVIPF $1.7 million, part of which would pay for repairs at police stations.

Some of that funding did go towards “minor repairs” at the West End and Road Town stations, Mr. Matthews said, but the money fell short.

The entire top floor of the barracks in Virgin Gorda was destroyed, and the roof and several walls were also blown away. Funding given through a UK contractor did not stretch enough to make repairs to the barracks by the end of the UK financial year on March 31, the commissioner reported.

“This has become very challenging to have to move officers, and there is no accommodation — especially for officers who have homes on Tortola,” he said, according to the SFC report.

The Jost Van Dyke police station was also “completely destroyed,” the commissioner said, and it may be two to three months until the West End station is “fit to re-enter.”

Meanwhile, the police force is still without a permanent headquarters.

Since the Road Town building was heavily damaged, the Rite Way in Pasea has served as a makeshift command centre.
But the supermarket has indicated that because the RVIPF had occupied the upstairs space for the previous six months, it would have to start paying to use the building, Mr. Matthews said.

The commissioner also gave statistics about crime in the VI.

The police force currently has just over a 50 percent detection rate for homicides, he said. Nine people have been charged in connection with half of the ten murders that took place in 2017.

The commissioner added that despite the “alarming homicide rate,” incidents involving firearms decreased by 22 offences in 2017.

“This does not stop the people of the territory feeling vulnerable,” he admitted in the SFC report.

That vulnerability increased after last year’s hurricanes, when there was a “dramatic rise” in burglary offences, which included post-storm looting, Mr. Matthews said.

“The force continues to work through video footage and photographs to identify further offenders,” he said.