Mapping the Virgin Islands from space

For the past two years, Finfun Peters has been using satellite images to track the prevalence of an invasive species on Anegada called whistling pine. “We basically manipulate satellite imagery …

END_OF_DOCUMENT_TOKEN_TO_BE_REPLACED 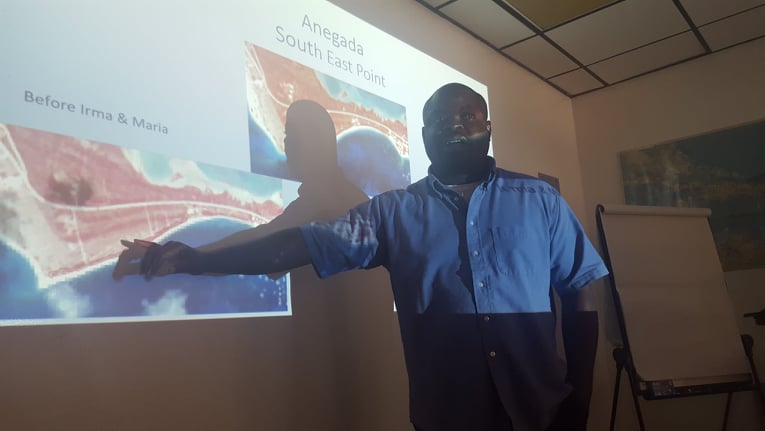 Finfun Peters, the marine programme coordinator at the National Parks Trust, shows how he used satellite images to track changes on the southeastern coast of Anegada. (Photo: ZARRIN TASNIM AHMED)

For the past two years, Finfun Peters has been using satellite images to track the prevalence of an invasive species on Anegada called whistling pine.

“We basically manipulate satellite imagery to extract geographic information,”explained Mr. Peters, the marine programme coordinator at the National Parks Trust. “In this instance we are focused on vegetation.”

Mr. Peters was one of several speakers at a Tuesday presentation about how government agencies have been using satellite technology as part of a two-year project called “Mapping for Evidence-based Policy, Recovery, and Environmental Resilience.”

At the start of the project, senior public officers in environmental fields were trained in the technology, and then they applied it to areas they were already studying, explained Chrystall Kanyuck-Abel, information and education manager at the Department of Disaster Management.

On Tuesday at the DDM, representatives of the NPT, the United Kingdom-based company Environment Systems, the Turks and Caicos Trust, and the Ministry of Natural Resources, Labour and Immigration demonstrated the benefits of using satellite imagery to collect environmental data.

“The most important success story are the folks in the room who learned how to analyse and use the data for themselves,”said Katie Medcalf, of Environment Systems, which helped train public officers in the use of the technology.

The two-year project was funded by the United Kingdom’s Darwin Plus initiative, which provides funding for environmental projects in UK overseas territories, according to Nancy Woodfield-Pascoe, deputy director of science, research and environmental policy at the NPT.

As five speakers took the microphone, various projects were discussed.

Ms. Medcalf explained a colleague’s research in the Turks and Caicos Islands. To prove that a plant was endangered, the colleague used satellite technology to track rare habitats in need of protection.

“Those are the real results of the project and something that your colleagues here could do in the BVI in a similar situation,” she said. “We’ve got so many ideas for things that we can do in the future to bring together more training and more data.”

Mr. Peters explained his whistling pine project as well as his efforts to monitor changes to the beachfront in an area on southeast Anegada.

Before hurricanes Irma and Maria in 2017, he said, the beach stretched 127 metres until it reached the ocean. In 2019, that number had shrunk to 37 metres.

The satellite that provides his images circles near the equator, and the imagery repeats every six days, he explained.

“Using satellite imagery from before Irma, you see that we had lush vegetation of mangrove areas,” she said, pointing to satellite images on the presentation screen. “And then after Irma we see the vegetation diminish. That represents the devastation that we all saw with our naked eye. This has been seen throughout the whole of the BVI.”

She collected data across all the mainlands in the territory, she said.

“Red mangroves suffered tremendously from the passing of Hurricane Irma,” she said. “The others as well, but the red is more noticeable than others. We can see they are recovering, so this is a good
success story.”

She also used the satellite images to monitor the influx of sargassum in Anegada after Hurricane Dorian last September.

“This was a very exciting time for us to not only quantify it but to feed it into reports,”she said.“That is the power in using … remote sensing.”

Ms. Woodfield-Pascoe focused on forest health, productivity and vegetation to complement work done by the NPT over the past 20 years.

During her presentation, she explained the fieldwork the NPT has done with Kew scientists from the Royal Botanical Gardens in the UK, especially after Hurricane Irma.

NPT and Kew have done fieldwork on all 60 islands in the VI, and using satellite imagery allows them to collect valuable data that can be scaled on a larger level, she said.

NRLI Minister Vincent Wheatley added to the presentation by urging the speakers to distribute the information they’ve collected. He stressed the importance of educating all VI residents, from policymakers to students.