The revamped Road Town Market Square — which initially was scheduled to open in July 2021 — is now slated for completion by the end February, according to Duane Fraites, …

END_OF_DOCUMENT_TOKEN_TO_BE_REPLACED 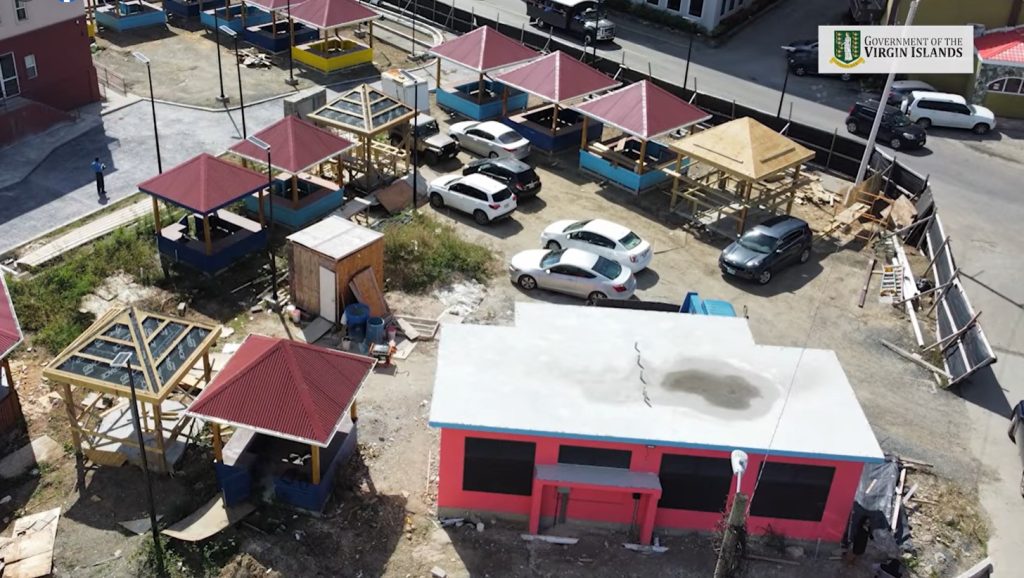 The Road Town Market Square will be complete by the end of February, officials said last week. It initially was scheduled to be complete in July 2021.(Photo: GIS)

The revamped Road Town Market Square — which initially was scheduled to open in July 2021 — is now slated for completion by the end February, according to Duane Fraites, chief of infrastructure, planning, research and development at the Ministry of Communications and Works.

Mr. Fraites gave the update last week during a government broadcast of a site visit with Deputy Premier Kye Rymer, who is the minister of communications and works.

After years of delays, elected officials broke ground on the project in October 2022, saying it would be completed in about nine months. But more delays followed.

During the tour last week, Mr. Fraites said most of the project’s 16 kiosks have been completed and the remainder are expected to be completed before the year ends. He added that a bandstand and a central gathering building are also complete.

“At the moment, the contractor is tidying up the area,” he said. Mr. Fraites also noted that a contract was recently signed for the construction of walkways that will provide visitors with easy access around the area.

Landscaping works will follow, he said, and a bus shed is also slated for construction before the project is finished.

To facilitate vehicle access to the area, a service road was built through the square for tenants to drop off their goods, according to Mr. Fraites. Because the tenants will not be allowed to park there after dropping off goods, the ministry has been working to provide them with suitable parking arrangements at the nearby Festival Village Grounds, he said.

Leading up to the project, Mr. Fraites said he and MCW Permanent Secretary Ronald Smith-Berkeley met with building owners in the area and shared the master plan for the site. During the discussions, he added, residents were able to voice concerns and ask questions. “We had a good dialogue with them; they were receptive in terms of being part of the project,” Mr. Fraites said.

Also on the video, Mr. Rymer noted that the area has been prone to flooding in the past, but Mr. Fraites said the foundation of the square was built above the level of the existing roadway as a measure to counter flooding.

In addition, he said, several pipes and slipper drains have been installed as part of the area’s drainage system. “We are confident that we shouldn’t have any major flooding issues here at the Market Square,” Mr. Fraites said.

He also noted that the kiosks were designed to allow tenants to operate independently at the site. “We put in sinks in all of the kiosks,” he added.

“There is power, lighting, in the kiosks so persons can set up even for night operations.” Mr. Fraites said the buildings were painted with primary colours to give the area a “Caribbean or tropical flavour.”

“It allows it to stand out,” he explained. “It is also an opportunity where tourists can be able to identify the Market Square when they walk through the Road Town area.” The landscaping will include planting palms and other trees, he said.