Hundreds of Virgin Islands residents marched into the Festival Village Grounds on Friday for a parade and ceremony to celebrate the 93rd birthday of Queen Elizabeth II. Governor Gus Jaspert …

END_OF_DOCUMENT_TOKEN_TO_BE_REPLACED 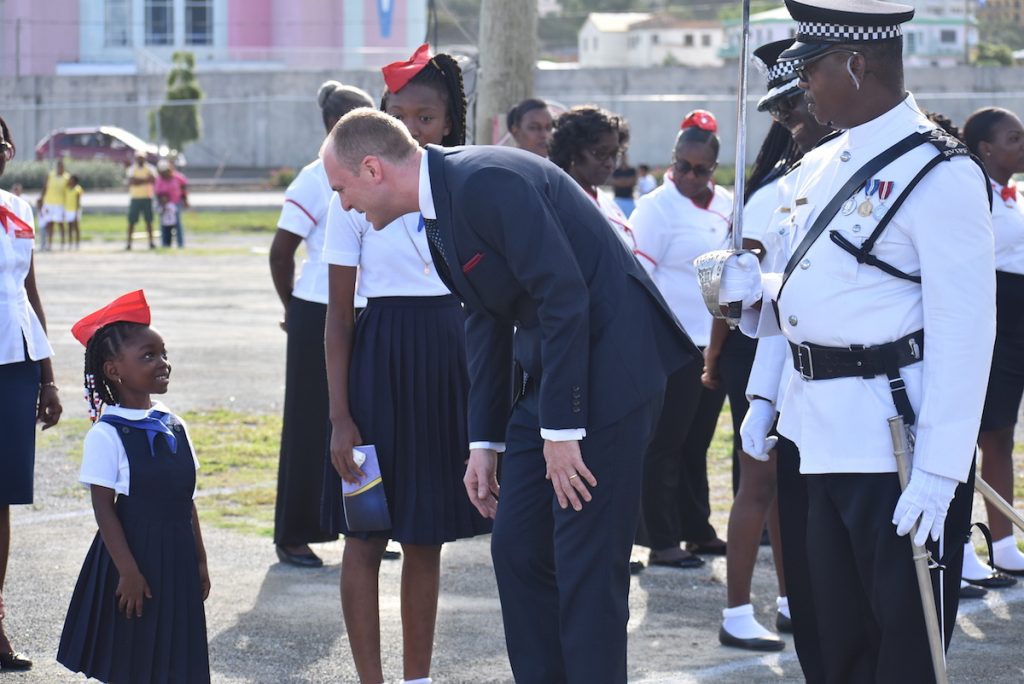 Hundreds of Virgin Islands residents marched into the Festival Village Grounds on Friday for a parade and ceremony to celebrate the 93rd birthday of Queen Elizabeth II.

Mr. Jaspert also read aloud a message from the Virgin Islands to the Queen and her response sending best wishes to the people of the VI.

The Queen’s actual birthday is April 21, 1926, but her “official” birthday is celebrated on different days across the Commonwealth.

In the United Kingdom, the Queen celebrates her official birthday on the second Saturday in June in a “Trooping the Colour” Parade along Buckingham Palace, The Mall and Horse Guards Parade.

While the day is not designated a public holiday in the UK, it is in other Commonwealth countries and territories, including Australia, New Zealand and Gibraltar.

For some the ceremony represents tradition, a celebration of the territory’s links to the UK.

Former Culture Director Luce Hodge-Smith said she enjoyed the event, which she has been attending since she was a child.

“There were quite a few people out today,” Ms. Hodge-Smith said Friday. “People do come out, and not just for the children but for themselves as well and the fact that there are those who are being recognised for years of service. So it’s a good thing. I think people recognise that it is tradition and they value it.”

But other Virgin Islanders question why the Queen’s birthday is celebrated as a public holiday in the VI and not in the UK.

“I don’t understand the purpose of it,” said Eugenia O’Neal, who grew up in the VI and now lives abroad. “I think that if the UK or the Foreign and Commonwealth Office or whoever wants to establish closer relations with the overseas territories — really the colonies — then there are tangible ways in which they can do that. Having a holiday? I’m not sure this is the best way.”

Ms. O’Neal added that she sees the tradition of donning British-style formalwear as just another example, along with wearing wigs in the legislature, of the territory holding on to British traditions instead of embracing its own culture.

The VI has had a troubled relationship with the UK in recent months.

The House of Commons’ Foreign Affairs Committee report, which called for the phasing out of belongership and the imposition of same-sex marriage in the OTs, drew widespread indignation here.

But multiple attendees said on Friday that they saw the Queen’s birthday celebration as tradition, and didn’t associate the event with the recent tension.

“I haven’t heard anybody commenting about that,” Westmore Jeffers said about the backlash to the FAC report, adding of the ceremony, “I think it was good; I think it was larger than last year. It was well attended and the people were receptive.”

UK as a ‘bulwark’

Ms. O’Neal acknowledged that the VI maintains a special bond with the UK despite the recent tensions.

“I think people have an attachment to the UK that transcends some of the debates or some of the arguments that sometimes cause hiccups in that relationship,” Ms. O’Neal said, adding, “I think many people also hope that the UK would stand as a bulwark against poor governance in the colony. I think that’s one of the reasons why there’s that fondness or that connection.”