Meet all 41 candidates running for office

With 41 candidates vying for votes, there’s plenty of variety to choose from — in some ways, more than ever before. This year, four political parties, each with an experienced …

END_OF_DOCUMENT_TOKEN_TO_BE_REPLACED 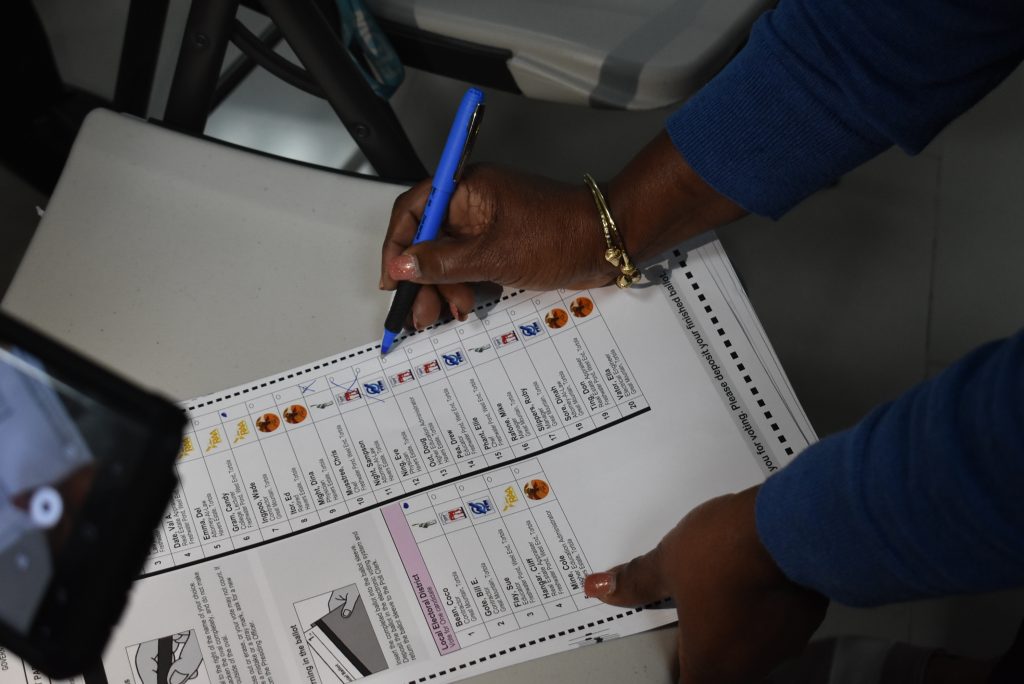 With 41 candidates vying for votes, there’s plenty of variety to choose from — in some ways, more than ever before.

This year, four political parties, each with an experienced incumbent at the helm, are contesting the election: The Virgin Islands Party, and two upstarts — Progressives United and the Progressive VI Movement — will fight to take the government from the National Democratic Party, which has held power for two consecutive terms.

Sixteen at-large candidates are in the race, the same number as in 2015 and 2011, with 25 candidates left to compete in the nine districts.

The VIP is the only the party with a full slate of 13 candidates. The NDP, which in 2015 fielded a full slate, comes close with 11, and the PVIM is next in line with nine. PU mustered six.

In recent elections, the VI has seen multiple new parties cropping up (one in 2011 and two in 2015). However, neither those parties nor any independent candidates have managed to pose a real challenge to the VIP and the NDP, which for two decades have traded power under Premier Dr. Orlando Smith and Ralph O’Neal.

But with both of those leaders now retired, the VIP and NDP have fractured, leading former members to launch the PVIM and the UP.

This year, the strength of those four parties seems to have vacuumed most independents into their orbits, leaving only two left to contend on their own. This represents a substantial decrease from 2015, when 11 independents ran, and 2011, when 13 did.

Compared to recent years, the 2019 slate is also full of fresh faces. Twenty-three candidates, more than half the total, have never before vied for elected office, compared to 17 in 2015 and 19 in 2011.

The VIP is particularly fresh, running 10 newcomers along with one incumbent and two other returning candidates who have not held office.

By contrast, the fractured NDP has five incumbents, a marked loss from the nine it ran in 2015, along with five first-timers and one returning candidate.

All told, 10 incumbents will vie to keep their jobs, one fewer than in 2015. Eight other candidates have run at least once before, with three of those having previously held office.

Incumbents Andrew Fahie (D1) and Julian Fraser (D3) — the leaders of the VIP and PU, respectively — along with independent Dr. Kedrick Pickering (D7), are tied for the most experience in elected office, all vying for a sixth consecutive term. 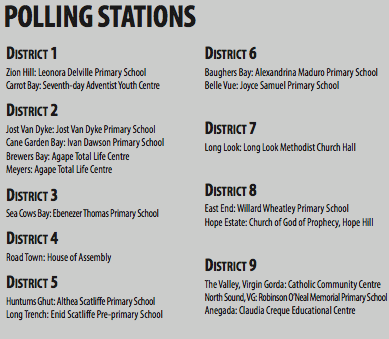 This number bucks an overall upward trend, given that seven ran in 2011, six in 2007 and five in 2003. The VIP ticket has four women running, the most of any party but also two fewer than the six it had in 2015.

Seventeen candidates recently have been employees of the government or its statutory bodies, compared to 13 in 2015 and 20 in 2011.

District Four, which includes Road Town, boasts the most candidates of any district at four — one for each party. In 2015, six people vied to replace long-time Ninth District Representative Ralph O’Neal. 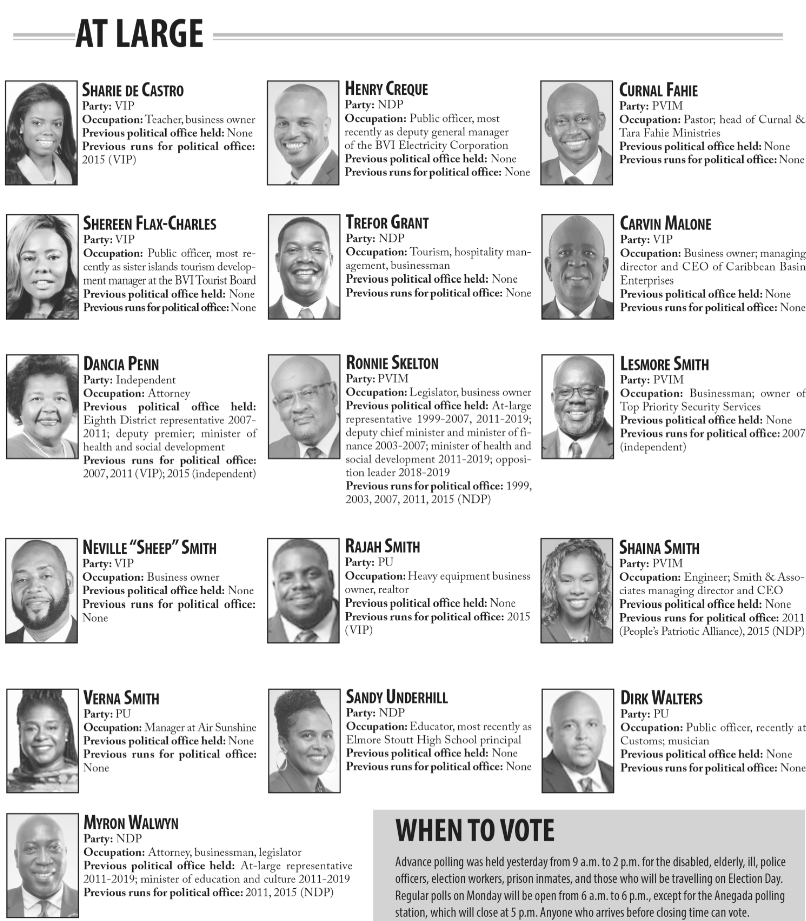 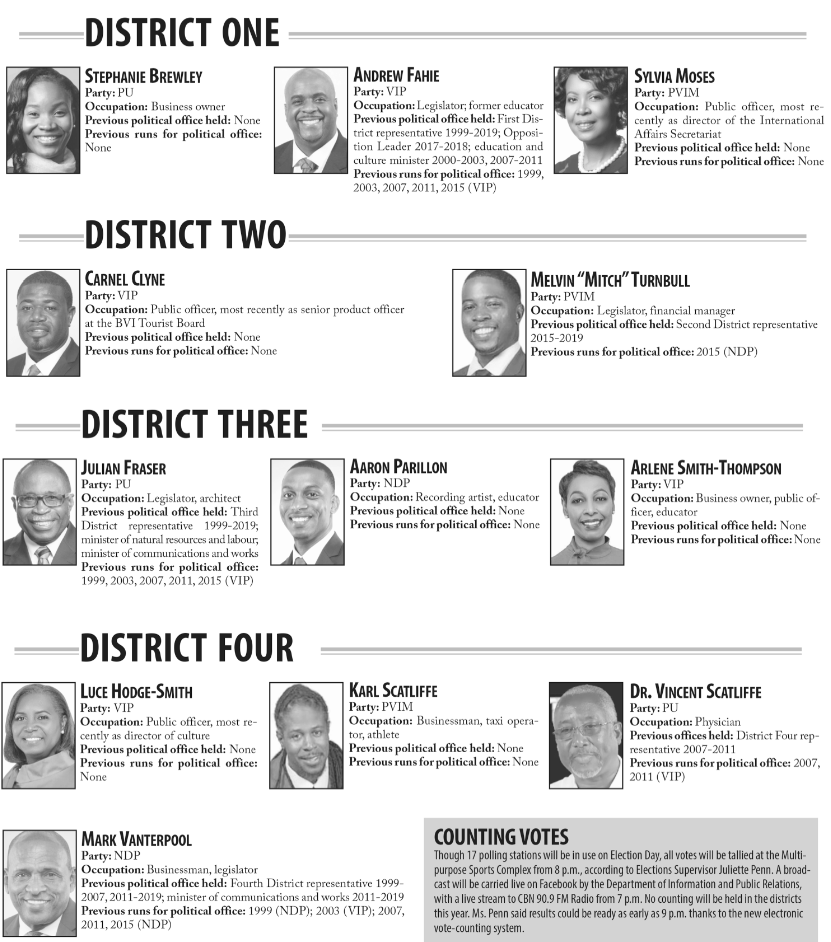 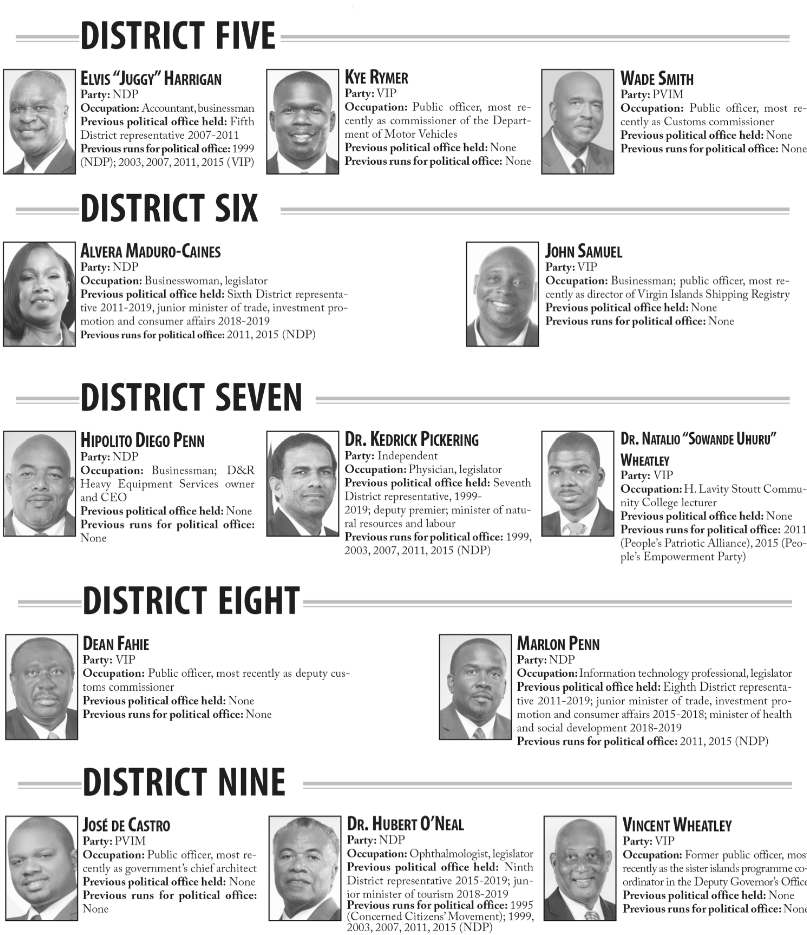