For Dr. Virginia Rubaine, Mental Health Month takes on added importance this year as the community struggles with the Covid-19 pandemic. “We’re going to be providing information about adapting after …

END_OF_DOCUMENT_TOKEN_TO_BE_REPLACED 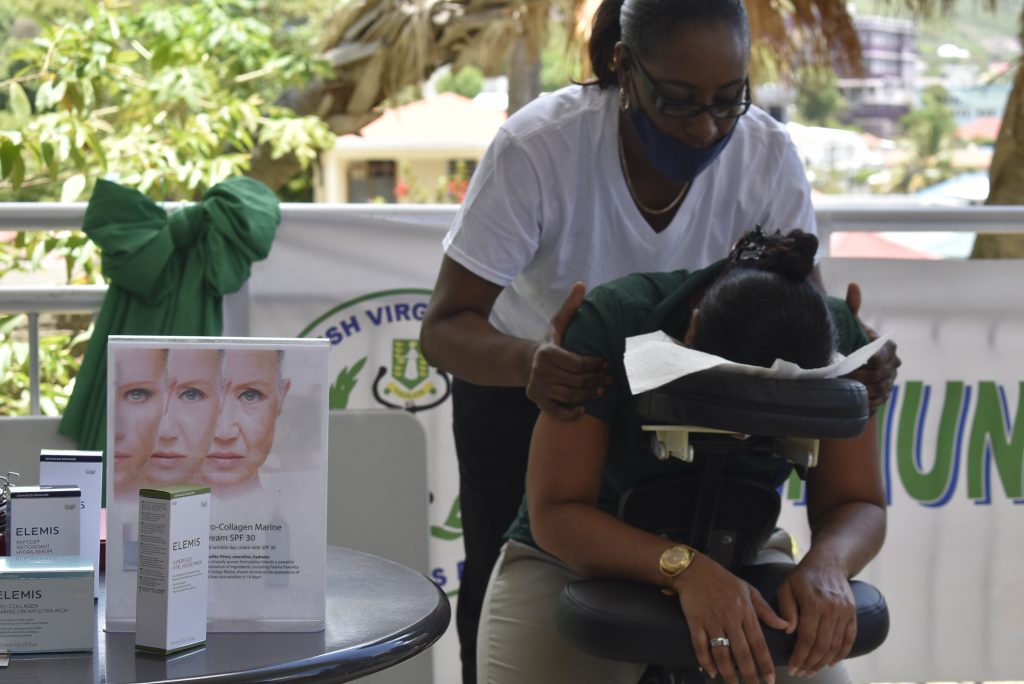 Massages and other services geared toward self-care were featured at a wellness fair last week, kicking off the Virgin Islands’ celebration of Mental Health Month. Organiser Dr. Virginia Rubaine explained some of the challenges posed by the pandemic and how people can help themselves. (Photo: ZARRIN TASNIM AHMED)

For Dr. Virginia Rubaine, Mental Health Month takes on added importance this year as the community struggles with the Covid-19 pandemic.

“We’re going to be providing information about adapting after trauma and stress, dealing with anger and frustration, getting out of thinking traps, and processing big changes,” said the Community Mental Health Services director, who coordinated the observance.

The month of activities kicked off on May 7 with a wellness fair on the patio of Dr. Orlando Smith Hospital, where mental health professionals from a variety of fields networked and chatted with visitors.

Nutritionist Philippa Barry, whose services are covered through National Health Insurance, handed out recipe books and information about healthy eating. Other health workers shared information about substance abuse rehabilitation, skin care and other services available in the territory.

Dr. Rubaine called the event a success, especially in opening up conversations about how young people have been affected by missing out on social activities during the pandemic.

“We really wanted to interface with the community and give them some practical tools to manage their resources and improve their mental health,” she said.

As daily figures on infection and death rates dominated the international news cycle, thousands of residents unexpectedly lost their jobs or saw drastically reduced hours while faced with increased demands in areas like child care for students forced to stay home.

Dr. Rubaine encouraged struggling people to take time for themselves, and to embrace “radical acceptance.”

“Radical acceptance is essentially accepting reality as it is,” she said, admitting that even she previously believed the pandemic would have been resolved by now. “Science has shown us that practising radical acceptance has been shown to reduce feelings of shame, guilt and anxiety. Very often, the biggest cause of our distress is when our expectations and assumptions about the world around us is not really congruent with the reality that we’re in.”

This pattern, she said, can cause people to feel stuck in a cycle of sadness that eventually leads to depression.

“One of the things that we want to do is remind people they can’t change what has already happened,” she added. “You can’t go back in the past unless you have a time machine. We want you to embrace your feelings — good, bad, ugly or indifferent — and we want you to cope.”

Part of this month, she explained, is helping people accept what’s happened since March 2020 and grieve what they may have lost, be it friendships, coming-of-age moments, financial security or something else.

Though the territory has been fortunate enough to avoid the drastic spikes in cases that neighbours have experienced, the pandemic also put the VI in a bubble that has caused some people to feel disconnected from the world, she explained.

For the community to progress toward acceptance and hope, Dr. Rubaine said a key step will be acknowledging the devastation caused by the pandemic worldwide. But ultimately, she said the community needs to do all it can to work toward a safe reopening.