Asked his favourite part about performing, Mighty Sparrow answered, “The people.” That’s what Ticolypso was all about: giving back to the community. Residents swayed to the sounds of calypso and …

END_OF_DOCUMENT_TOKEN_TO_BE_REPLACED 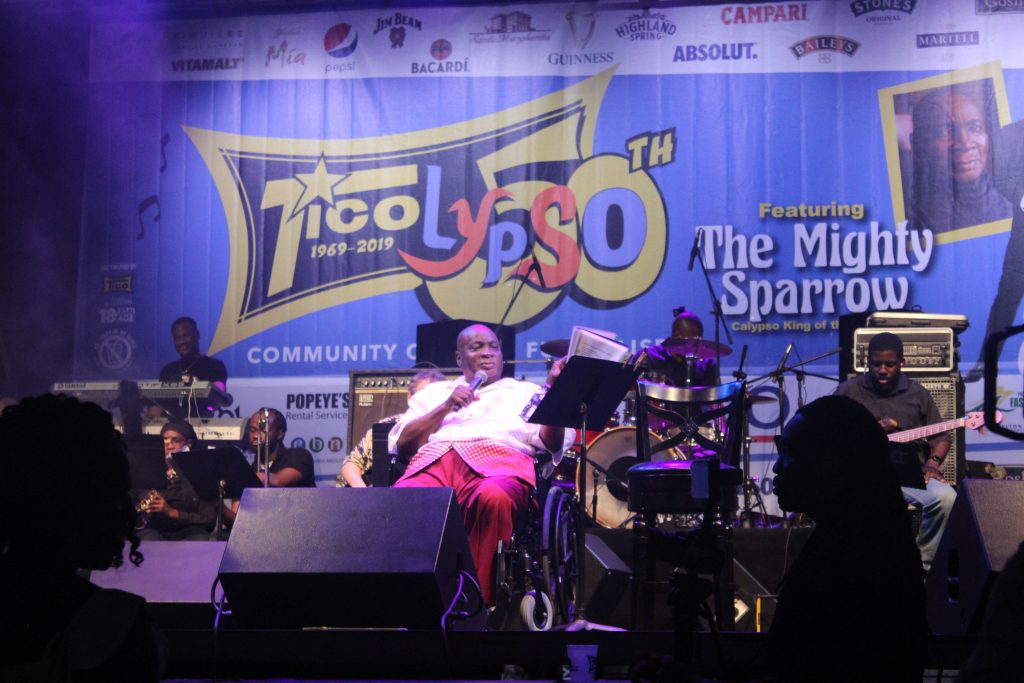 Though he was in a wheelchair for the night, Mighty Sparrow performed for more than an hour and a half on Saturday amidst long-time fans during the Ticolypso show at the Festival Village Grounds. (Photo: ZARRIN TASNIM AHMED)

That’s what Ticolypso was all about: giving back to the community.

Residents swayed to the sounds of calypso and other songs on Saturday night at the Festival Village Grounds during the show, which was part of TICO’s 50th anniversary celebrations.

The company distributes wine and liquor from all over the world and has had its roots in the community since 1969.

“When we first started it was 1969 and calypso was really big,” said brand manager Anne Reil. “[Ticolypso] is dedicated mostly to the people who were here for the first ten years of TICO business that then [enabled us] to have 20 years of business, and to have 30 and 40 and 50.”

A small but dedicated crowd showed up for the event. Two VIP tents were set up where drinks and food were served, and local vendors and spirit merchants operated several other booths.

Since much of the crowd was older, Ms. Reil said, the show started early and Slinger Franciso, known by his stage name Mighty Sparrow, per- formed early as well.

By 9 p.m., the 84-year-old Trinidadian was singing his hits from his wheelchair, backed up by about a dozen

Virgin Islands musicians who were hand-picked for the band.

The crowd began filling up around 10 p.m., and the Mighty Sparrow took special requests.

Four of his albums were on sale during the Ticolypso show, and many attendees were so familiar with his hits that they sang along.

According to his website, he will perform on Nov. 21 at the Lincoln Center in New York City and again on Dec. 7 at Joe’s Pub in New York.

TICO also hosted a wine and spirits expo last week.Every two years, the company invites suppliers from all over the world to the VI.

This year, TICO also hosted an expo in Virgin Gorda on Nov. 13 aboard the Road Town Fast Ferry. The next day, the expo aboard the ferry moved to Tortola. Both events were open to hotels, restaurants, bar owners, charter crews and villa owners.

Suppliers at the expo tasted wine and liquor while networking with one another and enforcing their relationship with TICO.

“We have quite a few strong brands with TICO,” said Garrett Koolman of Monarq Group spirits. “We’ve come down to support. This is my second time to the BVI.”