Agriculture has become a multibillion-dollar industry in the Caribbean and can help transform the economy of the Virgin Islands, Deputy Premier Dr. Kedrick Pickering said last week. Speaking on March …

END_OF_DOCUMENT_TOKEN_TO_BE_REPLACED 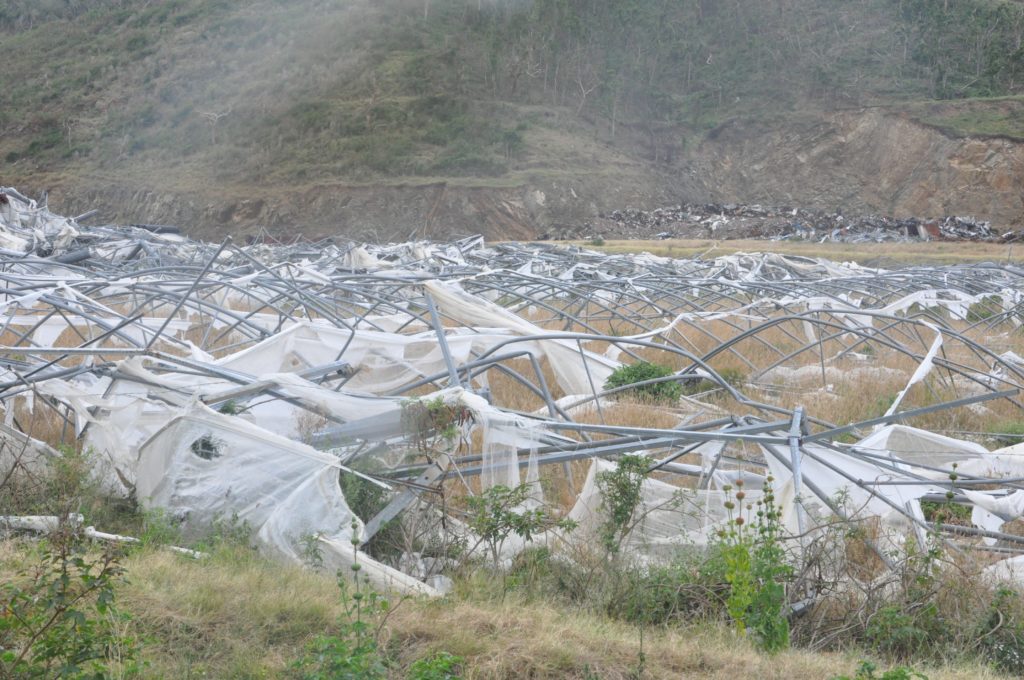 Though the greenhouses in Paraquita Bay (above) were destroyed in Hurricane Irma, Deputy Premier Dr. Kedrick Pickering is planning to build more.

Agriculture has become a multibillion-dollar industry in the Caribbean and can help transform the economy of the Virgin Islands, Deputy Premier Dr. Kedrick Pickering said last week.

Speaking on March 7 at the Central Administration Building in front of dozens of farmers, Dr. Pickering explained his vision for the plan the government is now formulating.

“I see a tremendously bright future for agribusiness in these islands,” he said. “But it can only become that if we adapt to … what is happening in the world. How do we incorporate technology in the use of agribusiness industry?”

He cited the examples of Barbados and Jamaica, where manufacturers are using locally grown products to create cosmetics, pharmaceuticals and foods for export worldwide.

“We are now at the point in our history … where I think the agribusiness industry can basically take over the economy,” said Dr. Pickering, who is the minister of natural resources and labour. “The reason being is that we don’t have to have a lot of land to do what we do. … We don’t have to have an intense amount of labour.”

Agriculture currently makes up about one percent of the territory’s economic output.

Last month, a representative of the Overseas Countries and Territories Association gave a presentation to farmers on the potential for constructing small greenhouses in four locations: Paraquita Bay and Cappoons Bay on Tortola; Beef Island; and South Sound on Virgin Gorda. These would replace the larger ones in Paraquita Bay that were destroyed in Hurricane Irma before they were operational.

And last week, Dr. Pickering said that every farmer in the territory will have an opportunity to own a piece of the new greenhouses.

“My vision is that anyone who is interested in growing anything should have a little piece of land somewhere with a greenhouse on it,” he said. “The land in Virgin Gorda [in South Sound] that was excavated for greenhouses is still available to us.”

He added that despite the destruction of the previous greenhouses, Hurricane Irma has been a blessing in disguise in many ways.

“What has happened … has given us a new opportunity to be able to start off fresh from where we were and build an industry from the ground up,” he said.

He added that Anegada is especially rife with opportunity.

“I would like to see Anegada become the breadbasket of the Caribbean,” he said. “The sun is there; the wind is there; the energy is there. We could produce so much food that [the issue of] food security becomes a thing of the past.”

Dr. Pickering also expressed his support for the territory entering the medical marijuana business — but only for export. He described the plant as “a big, big business that farmers can get involved with.”

He said since Canada has legalised the drug, “They are looking for places in the Caribbean to grow the marijuana and export it. We are not growing marijuana to send to anybody locally.”

For the past two months, the ministry has been meeting with VI farmers and offering educational workshops in the efforts of forming a workable national strategy for agriculture. Consultant Dennis Ramdahin, founder of the US-based Vihara Foundation, was in the territory last week to conduct a field survey and help the government in developing an agricultural master plan.

He released a statement Friday, saying, “The mission [of the plan] is to help reduce BVI’s food importation bill [by] 90 percent, and make climate resilient its food security systems.”

In February, Deputy Director of Agriculture Arona Fahie-Forbes said that any policy decisions would wait until after Dr. Pickering’s meeting with the farmers last week.

Most attendees agreed with the government’s move toward promoting agriculture in the territory. However, some expressed skepticism about the greenhouse plan.

Aragorn Dick-Read, who farms in Turnbull Estate, said government needs to listen to local farmers to really understand agriculture in the territory.

“We are now again … hearing talk about greenhouses and technology being the solution,” he said. “I think the majority of people in this group probably wouldn’t agree with that as a future.”

He pointed out that greenhouses can only work in places that have stable infrastructure and a consistent water supply.

In fact, many farmers at the meeting, including those already farming in and around Paraquita Bay, expressed frustration at obtaining water.

In a February interview, Spring Ghut farmer Bertrand “Washasha X” Lettsome said, “The limiting factor on this island by and large is just water.”

He added that the government needs to sink at least as much money into staple crops as it does into greenhouse produce.

Mr. Dick-Read said that the territory should have learned its lesson from the fate of the last greenhouses.

“They never produced anything and they’ve blown away,” he said. “We need to be looking at growing food in the traditional, indigenous ways [like] root crops [and] fruit trees.”

He advised government to put its ear to the ground and listen.

“People here know how to grow food,” he said.