A high school campus shuttered so cleaners could rid it of mould.  A primary school classroom temporarily unusable after ceiling tiles collapsed. Stipends and back pay for teachers that have …

END_OF_DOCUMENT_TOKEN_TO_BE_REPLACED 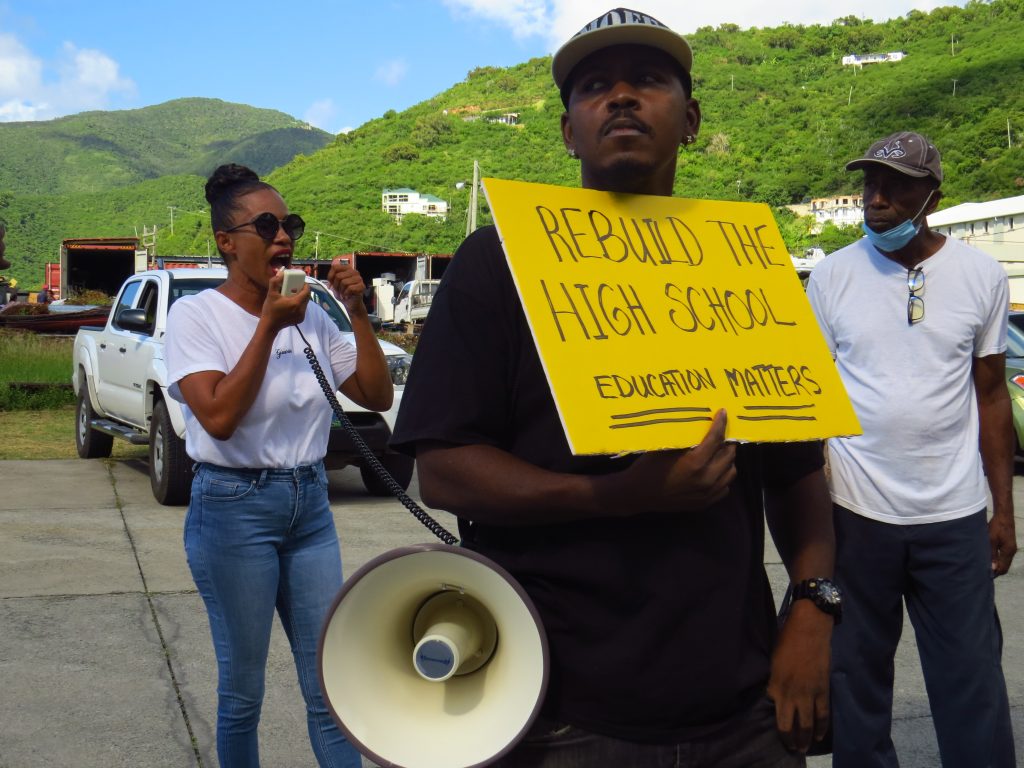 Last week, dissatisfaction over the territory’s crumbling school buildings and stagnant wages paid to teachers led some of them to ditch their classes as part of a “sickout,” while residents echoed these frustrations during a protest of perceived government failings Monday in front of the House of Assembly. (Photo: DANA KAMPA)

A high school campus shuttered so cleaners could rid it of mould.  A primary school classroom temporarily unusable after ceiling tiles collapsed. Stipends and back pay for teachers that have yet to be handed over.

In the face of crumbling infrastructure and stagnant wages, dozens of teachers staged a “sickout” last week, opting not to attend their virtual or in-person classes and resulting in at least one primary school being mostly empty on Friday.

On Sunday night, Deputy Premier Dr. Natalio “Sowande” Wheatley vowed in a Facebook speech to address the concerns aired by the BVI Teachers Union, and called on his House of Assembly colleagues to allocate $2 million in the “upcoming budget” to overhaul the territory’s education system.

“Teachers, I have heard your cry and I acknowledge that you are right,” said Dr. Wheatley, who is the minister of education, culture, youth affairs, fisheries and agriculture.

“We must put our money where our mouth is. We must back up our talk ​​with action.”

Although Dr. Wheatley said the sickout was not a coordinated campaign by the union, union officials have remained largely silent, declining to confirm or deny that the sickout was a form of protest.

Through a representative, Union President Tammy Henry declined to speak with the Beacon, and instead forwarded a widely circulated Oct. 27 statement.

“Our teachers are tired and frustrated. Our cries, though, appear to be falling on deaf ears,” the statement claimed.

“The conditions of our schools and the treatment of our teachers must be a priority, not a reaction.”

The tensions that led to last week’s sickout have been boiling amongst teachers for months. Following a meeting with politicians including Dr. Wheatley and Premier Andrew Fahie in the summer, the union submitted a list of five requests that the officials agreed to fulfill, Dr. Wheatley said.

These requests included the disbursal to every public school teacher of a $300 stipend to reimburse them for personal expenses incurred while teaching during the pandemic; the payment of “two past-due increments;” active participation in the salary review process; better maintenance of school facilities; and regular updates on when Elmore Stoutt High School senior students and teachers at the former Clarence Thomas Limited building in Pasea Estate will finally move back to the Lower Estate campus.

Similar concerns were echoed during discussions last week with more than 100 teachers, many of whom voiced their dissatisfaction with other issues including human resources and management, Dr. Wheatley said.

“Let me affirm beyond a shadow of a doubt that our teachers have undisputedly valid concerns that must be addressed,” Dr. Wheatley said.

Since the August meeting, he said, his ministry has made some progress in meeting the teachers’ needs.

About 75 percent of the $300 cheques had been printed and were ready to be mailed out; the 2017 increments have been included in a recent budget adjustment and are being processed by the Human Resources Department; and HR Director Michelle Donovan-Stevens has confirmed that the union and other stakeholders will have “full involvement” in the upcoming Cabinet-commissioned salary review, the first to take place in 19 years, according to the minister. Noting the union’s request to be regularly updated on the process of returning the high school division back to ESHS’ Lower Estate campus, Dr. Wheatley said money has been allocated to the Recovery and Development Agency as part of the recent adjustment budget, and that demolition of the existing site and designs for a new one should be completed this month with a view to begin construction in January.

He did not say when he expects students and teachers to return to the Lower Estatecampus.

Of all the union’s concerns, the hardest to address will be the school system’s infrastructural problems, many of which were severely exacerbated by the 2017 hurricanes, Dr. Wheatley said. He pointed to some progress on this front — including the refurbishments and renovations at five schools in the territory, with more than $1 million spent this year on “school maintenance and mould remediation.”

But he also conceded that absent HOA approval of the increased spending, students would likely continue to learn in subpar facilities.

Though Dr. Wheatley said he will be “advocating strongly in the budget meetings” for more money to complete other outstanding works, he did not detail the needed works or say when they will be finished.

“It always seems that money can be found for emergencies in other areas,” Dr. Wheatley said, adding, “Let’s make sure that every single school has the money that is required to make sure that we provide a safe and healthy learning environment for our children.”

He also scolded some members of the public who he said used “hateful and threatening” language when commenting on the sickout — including one person who he said called for the minister’s lynching at the Sunday Morning Well — and corrected what he called a false news report claiming that teachers who skipped their classes during the sickout would have some of their pay docked.

Though he clarified that no teachers would be penalised for their actions during the sickout, he asked them all to “return to the table of dialogue, so we can work together on rectifying these methods.”

Last Thursday, a group of three girls in grade eight at ESHS said they’ve noticed that many of their teachers seem stressed.

According to one of the girls, who asked not to be identified, students from two classes are occasionally forced to squeeze into one classroom, resulting in classes of up to 40 students and making it difficult for her to see the whiteboard at the front of the room.

However, all three girls said that they still feel they are getting a good learning experience, and that they actually enjoy getting to interact with more of their peers.

On Monday, an ASPS employee who asked not to be identified told the Beacon that school officials had found that some of the ceiling tiles in one of the classrooms had collapsed sometime before school began on Monday, and that students in that classroom were squeezing in with kids in another.

In a Monday WhatsApp message, Dr. Wheatley said “the collapse of a ceiling in one class” was one of the infrastructural challenges at ASPS his ministry was working to fix.

“We are working hard to rectify it,” he said.