In a 33-page position statement to the Commission of Inquiry, Premier Andrew Fahie and his six ministers called for a “true partnership” between the Virgin Islands and the United Kingdom, …

END_OF_DOCUMENT_TOKEN_TO_BE_REPLACED 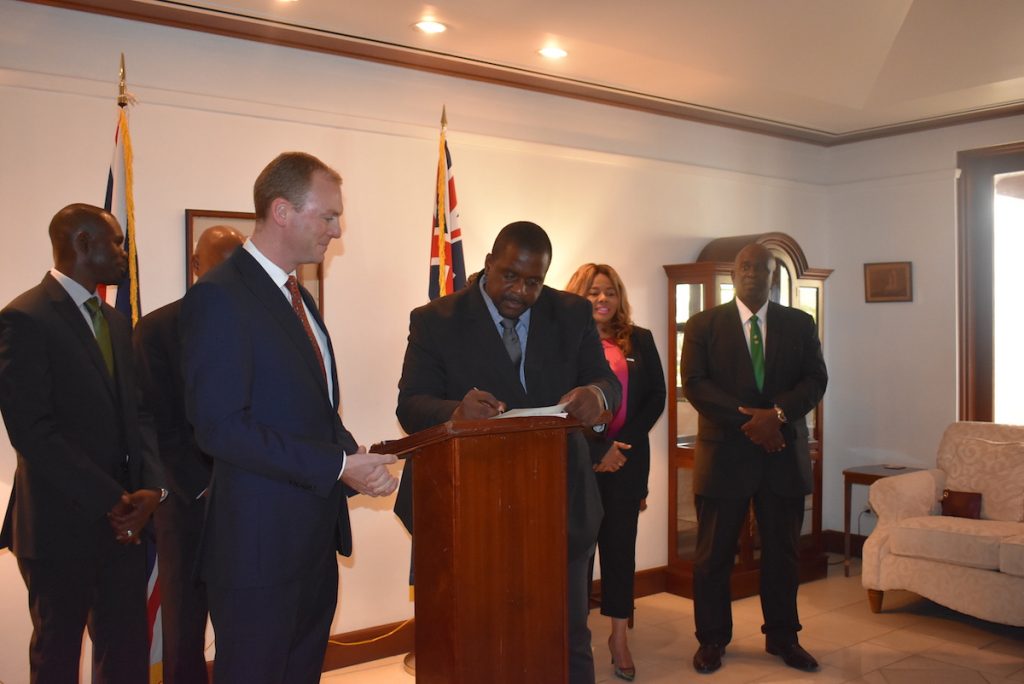 Governor Gus Jaspert swore in Premier Andrew Fahie as minister of finance at a ceremony on Friday. (Photo: GENEVIEVE GLATSKY)

In a 33-page position statement to the Commission of Inquiry, Premier Andrew Fahie and his six ministers called for a “true partnership” between the Virgin Islands and the United Kingdom, and they claimed the UK and former Governor Gus Jaspert have undermined that goal in many ways.

The ministers alternately accused Mr. Jaspert of being too heavy-handed and too hands-off in working toward good governance, and they claimed that the relationship between the Virgin Islands Party government and the UK “suffered from an atmosphere of mutual misunderstanding and distrust” starting shortly after the party came to power in the 2019 election.

They also called for UK partnership in passing good governance legislation and guiding the public service on policy, as well as strengthening — rather than reining in — the Premier’s Office and Cabinet.

The paper began by arguing that the UK had “strayed” from the concept of a modern partnership set out in white papers in 1999 and 2012, which committed the UK to “building the capacity of the Virgin Islands to govern themselves and making sure the constitutional arrangements worked effectively.”

The ministers also criticised Mr. Jaspert for applying “heavy pressure” on the VI to accept the rules attached to the £300 million UK loan guarantee offered to help rebuild after Hurricane Irma. These actions, they wrote, contributed to the beginning of the alleged breakdown in the relationship between the governor and the VI government, in which both sides accused the other of a lack of support.

The territory resisted accepting the loan “on the grounds that it was unwilling to put itself in the position of sacrificing political and democratic control of so central a  priority of its economic policy,” the paper stated. “From the  outset, therefore, the relationship between the newly elected government and the Foreign, Commonwealth and Development Office suffered from an atmosphere of mutual misunderstanding and distrust.”

They also said the UK government emphasised that it would tolerate “no dilution of these conditions” and that the RDA would “not be directly accountable to the elected government and thus to the House of Assembly.”

“The extent and lack of direct political accountability of its powers attracted strong public, cross-party criticism,” the paper stated.

However, in the absence of the loan guarantee, the RDA has struggled to complete major recovery projects, and its initial CEO announced his resignation last year after completing less than two years of his five-year term.

The ministers also alleged a “failure by the previous governor to respect the standing and scope of authority of the elected institutions conferred by the Constitution, even to the extent of openly undermining them.”

They also accused Mr. Jaspert of “threatening to withhold assent” from amendments to the proposed Disaster Management Act 2003, which would transfer much of the responsibility for disaster management from the governor to the premier. Mr. Jaspert, they claimed, said the governor “should remain in overall charge.”

The House of Assembly passed the bill in January, but it has not yet received assent from current Governor John Rankin, who expressed similar scepticism about it in his own position statement.

The ministers repeatedly referred to a June 2019 report by the UK firm Public Administration International, which they said found “performance of the ministries and departments was beset by an absence of planning and policy developments.”

However, the ministers largely blamed the UK and the governor for this state of affairs.

“These are matters (the effectiveness, capacity and management of the public service) for which the constitutional responsibility and right of initiative lie exclusively with the governor, and ultimately with the UK government,” the ministers wrote. Although under the 2007 Constitution Cabinet has responsibility for policy formation, the paper stated, the UK provided no corresponding “infrastructure” to help, “despite the growing complexity and volume of the government’s responsibilities.”

“The consequence is a void in policy development, planning and coordination,” the ministers noted, claiming the UK has tried to fill this void with “coercive” means.

The lack of planning noted in the PAI report led to various issues, including the widespread use of tender waivers, the ministers said.

“Predictable problems were being left by ministries, departments, and the Deputy Governor’s Office to the point at which those problems had become immediate and pressing priorities, leading to a common practice throughout the government of requesting ad hoc Cabinet waivers of procurement processes,” the ministers said.

Between 2019 and 2021, out of 10 contract awards made by the Governor’s Group, six were by waiver of tender, the paper noted.

However, the issue of tender waivers was not new under the VIP government or Mr. Jaspert. For decades, Cabinet has been criticised repeatedly by the auditor general, the complaints commissioner, the
media and other watchdogs for waiving the tender process for contracts.

The UK, the ministers claimed, further showed bad faith when government introduced good governance legislation like the Integrity in Public Life Act, but Governor Gus Jaspert gave them no credit for it.

Instead, they said, in December 2020, Mr. Jaspert tried in a press briefing to take credit for “bringing forward” the act, even though a Cabinet decision the previous month had approved it.

“The governor’s statement taken in context … appeared to the elected government to imply that it was neither interested in nor concerned with the introduction of the bill and that he and the deputy governor were, in effect, imposing it because of his concerns about good governance in the Virgin Islands.”

The UK and VI must “share ownership” of the proposed reforms, the ministers said, but “the former governor’s statement … shows the elected institutions were not seen by him as a partner in the reforms.”

In addition to passing the Integrity in Public Life Act and adopting a Ministerial Code of Conduct, the ministers recommended that the Cabinet Office get a “Propriety and Ethics Unit” that would guide incoming ministers on the declaration of their interests and the avoidance of conflicts of interest.

Additionally, “as the director of human resources has observed, public servants have predominantly been focused on processes, not on the development of policy,” the paper continued. “For example, there is no cross-government policy or procedure for the appointment of members
of statutory boards.”

This system, they said, leaves ministers to use their own discretion.

“The Cabinet secretary should consult the record of the ministers’ interests prior to each Cabinet meeting with a view to raising possible conflicts for the ministers’ consideration,” the ministers wrote.

They also complained about a “chronic lack of capacity within government” that had led to issues like delays in drafting badly needed
legislation.

But laws alone, they noted, will not be enough, in spite of “the recent FCDO insistence on legislation.”

“Legislative programme is not a substitute for the development of detailed and thoughtful policy and the institutional capacity to produce and implement it successfully,”  the ministers wrote.

“Indeed, the enactment of legislation without that essential preliminary work will only result in a ‘box-ticking exercise’ that produces hasty and superficial legislation not tailored to the needs of the Virgin Islands.”

More important, the ministers claimed, is the development of a “detailed and thoughtful policy and the institutional capacity to produce and implement it successfully.”

Some of the measures they proposed would call for more cross government collaboration, and more public input into policy.

They called for a “significant strengthening of the Premier’s Office, the Cabinet Office … and of the resources of the Attorney General’s Chambers” in order to work with each ministry on policy measures,  and for the governor and deputy governor to “make themselves available once or twice a year before a special committee of the House of Assembly to answer questions in public about the work of their offices.”

They added that there is public concern about the operation and management of the Royal Virgin Islands Police Force, particularly given “the history of arrests of police officers for serious crime.”

To respond, they called for a “police authority, consisting of some elected and some appointed persons from civic society, with the power
to hold formal public sessions” in which the police commissioner would present on the force’s performance.

The ministers also complained about the UK’s insistence that OTs implement a public register of beneficial ownership by 2023, which
they cited as part of their argument that the UK “repeatedly failed” to respect the 2007 Constitution.

According to the paper, the VI government “remains the only government of a British overseas territory that will not implement the FCDO’s direction while such registers are not the global standard,  although the BVI government has stated that it would adopt the measures if and when they do become the global industry standard.”

However, in September 2020, the premier did pledge to work with the UK toward the standard, saying his government “commits to work in collaboration with [the UK government] towards a publicly accessible register of beneficial ownership for companiesin line with international standards and best practices as they develop globally.”

Now, however, the government is suing the FCDO over the requirement in a case filed in March 2019, the ministers said.

“In addition, with the support of the elected government, a claim for constitutional relief, to vindicate their fundamental rights to privacy under Chapter Two of the Virgin Islands Constitution, was commenced by two Virgin Islanders with business interests in the BVI against
the FCDO in respect of the [register] decision.”

The litigation, it added, is  before the High Court.