The NAGICO Tennis Tournament finished on Tuesday evening at the Tortola Sports Club, despite several rain delays throughout weeklong  event. The winners were Dion Anslem in the Men’s Division and …

END_OF_DOCUMENT_TOKEN_TO_BE_REPLACED 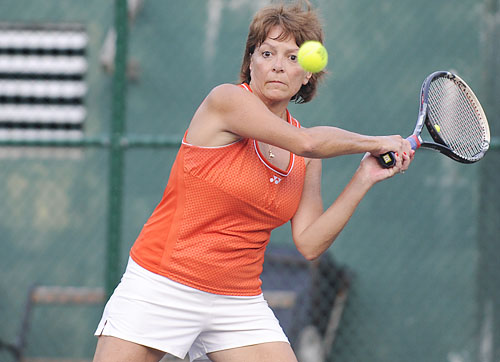 The NAGICO Tennis Tournament finished on Tuesday evening at the Tortola Sports Club, despite several rain delays throughout weeklong  event. The winners were Dion Anslem in the Men’s Division and Carol Mitchell in the Women’s Division. Alexia Alleyne was playing in the semi-finals against Ms. Mitchell on Friday when the game was delayed due to rain. The match was rescheduled for Monday, when Ms. Alleyne said her opponent’s forehand and slice had been giving her some trouble. “She hits the ball and it is hard to return,” Ms. Alleyne said. “My forehand is good, but my backhand is letting me down.” According to the junior player, her serve was also not at its best. She said on her second serve she was having trouble keeping it in bounds.

The rain delays may have contributed to the 15-year-old’s troubles.  She said on Friday she was playing a better game against Ms. Mitchell. “The delay is making me more anxious,” Ms. Alleyne said. “I can’t focus.”

Ms. Mitchell would win, 6-2, 6-4. She said the junior player has “potential” during the rain delay on Monday. “Alexia’s game has improved,” Ms. Mitchell said. “It’s  because of my experience, I  closed out the match.”

Ms. Alleyne said the final rounds of the tournament were the most challenging. “The tournament [was] easy with my first match against Ulla Gotfredson,” Ms. Alleyne said. “But the semi-finals [were] harder.” The junior player recently competed in a tournament in Puerto Rico and took first place. She said it was a good opportunity to compete against other players there.

She said offering more incentives for the players and getting the juniors involved will help get more women turning out for the tournaments. However, she doesn’t understand why more players from the TSC don’t play in the tournaments. She pointed to Rachel MacDonald as a “good athlete” and tennis player that has gone absent from the tournament scene.

“Juniors are the future,” Ms. Mitchell said. “If we can get more juniors and young girls playing tennis, it will go from there.” Ms. Mitchell was back on the court Tuesday in the final against Elissa Garimort. Ms. Mitchell won in two sets, 6-1, 6-0.

She said “everything” was working for her during the championship match. “My backhand, my serve, everything was working,” Ms. Mitchell said. “I just felt good out there.” During the final, Ms. Mitchell smiled on several occasions after scoring a point. “I was having fun,” she said. “I really love tennis.”

This isn’t the first time Ms. Mitchell and Ms. Garimort have faced each other during a tournament at the TSC.

The defending champion said she was disappointed with the level of play from her opponent and had more of a challenge during the semi-final against Ms. Alleyne.

“During the FirstCaribbean tournament she was more focused and intense,” Ms. Mitchell said. “I just know [Ms. Garimort] can’t beat me.”

In the Men’s Division, Salvador Lenaming said he was grateful that his boss allowed him to play in the tournament due to his demanding work schedule. Mr. Lenaming’s boss, Percy Rhoden, was also his opponent in the semi-finals.