After Premier Andrew Fahie abruptly postponed to next year most of the controversial port fee hikes that put the business community in an uproar earlier this year, the BVI Ports …

END_OF_DOCUMENT_TOKEN_TO_BE_REPLACED 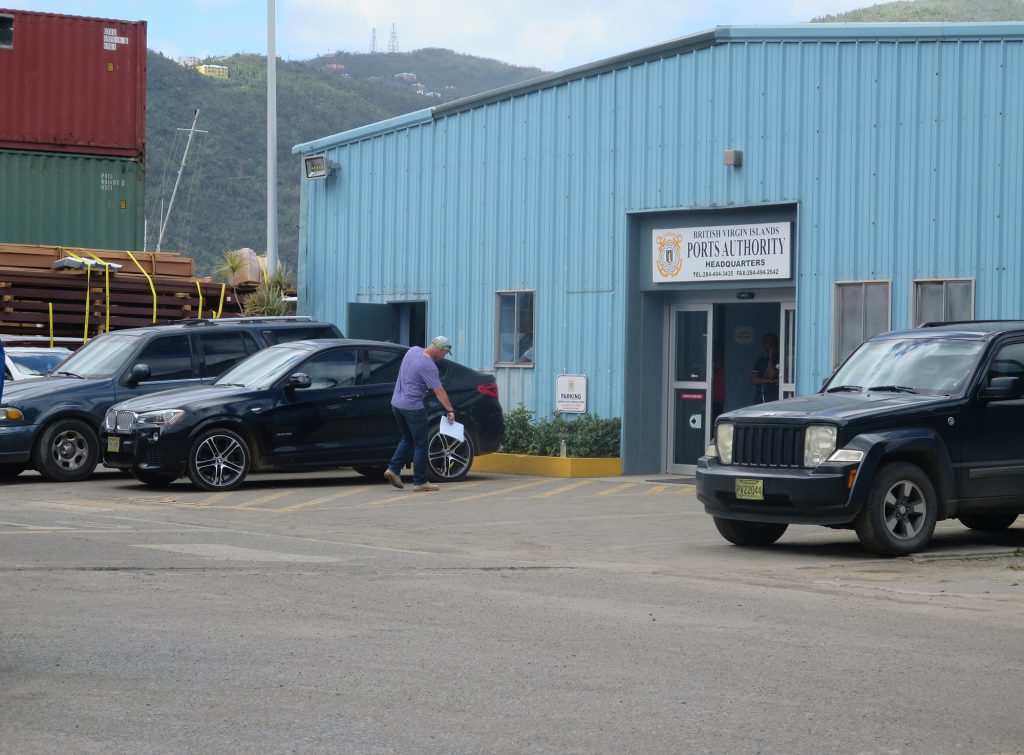 Vehicles enter the gates of the Ports Authority headquarters in Port Purcell to pick up shipments on Feb. 2. Photo: CLAIRE SHEFCHIK

After Premier Andrew Fahie abruptly postponed to next year most of the controversial port fee hikes that put the business community in an uproar earlier this year, the BVI Ports Authority has announced it is further easing the pain by postponing more fee hikes and reversing and refunding others that had already been implemented.

“The BVI Ports Authority officially advises all stakeholders that the majority of fees, including those scheduled to take effect next month, will be postponed to January 2022,” a BVIPA press release stated.

The fee hikes — the first for the authority in at least 20 years — were announced in January and included nearly across-the-board increases for licences and fees, some of which would more than triple starting March 1.

But in March, the BVIPA announced an attempt to appease critics and ease the pain by phasing in the adjustments, and in April the premier announced the next postponement plan.

Under that plan, revised licence fees for customs brokers and agents took effect in March, as did new fees for storage, wharfage, line handling, and container and vehicle access. The rest were scheduled to take effect next month.

However, the BVIPA announced last week that the latest fees will also be postponed to January 2022, and those already paid would be refunded when customers provide a paid receipt and documentation, the release stated.

The BVIPA first implemented the increases in order to raise money “to upgrade the ports to international standards,” Mr. Fahie said in April, adding that the decision “also took into consideration what the industry
norms and standards are in regional ports and the fact that fees in the Virgin Islands are significantly low in comparison.”

However, the reversals come with a catch. The port warned that the delay in implementing the new fees will cause a revenue shortfall and that limited resources will cause setbacks in infrastructure upgrades, “and occasionally, service delivery.”

“While this arrangement will not bode well for the enhancement of port facilities and technological usage to deliver more efficient services, it is important in building partnership,” the press release stated, thanking
customers for the feedback they offered. “The authority will continue to look for diverse ways to raise revenue in the short term.”

The upcoming reopening of the seaport to cruise tourism will provide some measure of relief, the BVIPA said, though it will not be enough to “maximise efficiency.”

Meanwhile, the authority will focus on maintaining pandemic-era safety standards and the international certification of the ports.

While that happens, “the process towards port transformation will be delayed, given the current fiscal challenges.”

The BVIPA has repeatedly said the increases are needed to improve service and upgrade facilities to meet more modern standards and comply with international regulations.

However, at the time it was announced, the BVI Chamber of Commerce and Hotel Association slammed the move, calling it “borderline madness” and more evidence of government’s bungled economic recovery plan.

Opposition Leader Marlon Penn had weighed in on the heated debate over the increases.

“This is simply not the right time,” Mr. Penn (R-D8) said at the time of the increases, claiming that the cost of doing business in the VI is already high and will rise further because of the fees.

In April, however, the premier needled Mr. Penn for his sudden objections to the hikes, saying he didn’t object to them at the time they were approved by the House of Assembly.

But the premier also said in April that the rollout of the fees did not go as he envisioned, adding that Cabinet had been asked to engage stakeholders more in the rollout, but they did not comply.

“Since then, the people of the Virgin Islands, as well as the small business stakeholders, have expressed concerns, mainly regarding the timing of the new fees,” he said, adding, “We cannot run from this forever. We will have to find a way to do what is necessary while softening the impact it will have on the population.