More puppy love at the Humane Society of the BVI

Barbecue the puppy needs a home. But until he gets one, at least he has a brand-new place to play. On Monday, he and a dozen of his littermates and …

END_OF_DOCUMENT_TOKEN_TO_BE_REPLACED 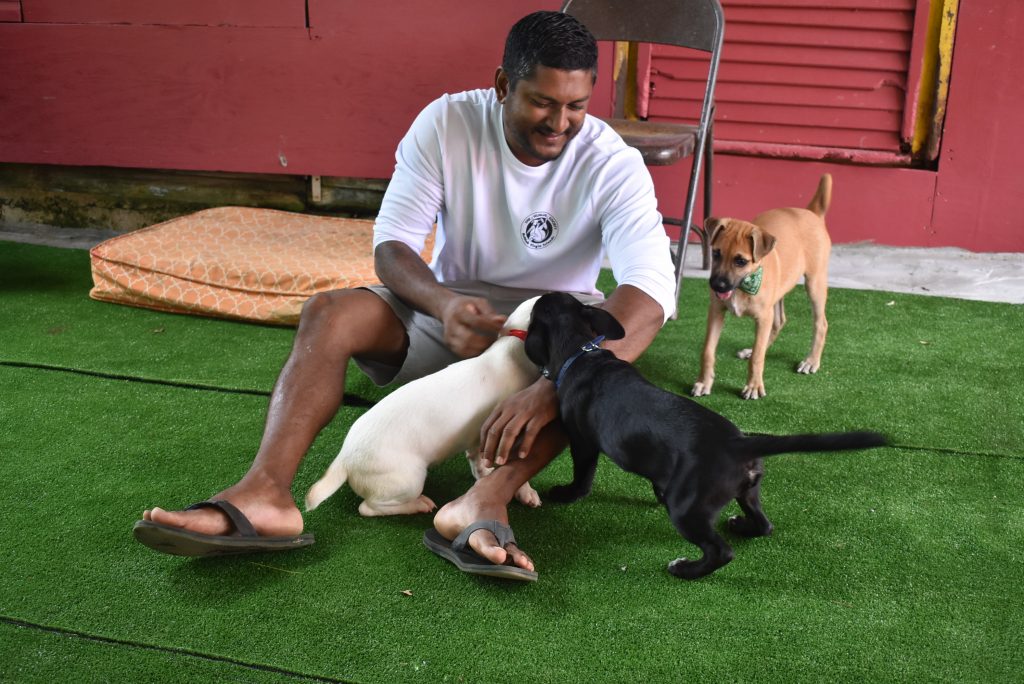 Sheltermanager Vijay Bissoondutt plays with some shelter puppies on the floor of the new enclosure at the Humane Society of the BVI. (Photo: CLAIRE SHEFCHIK)

Barbecue the puppy needs a home. But until he gets one, at least he has a brand-new place to play.

On Monday, he and a dozen of his littermates and friends chased a ball through the brand-new puppy enclosure at the Humane Society of the BVI.

Next door, his feline neighbours bounded around in a new enclosure of their own.

Further back, an altogether different creature — the shelter’s first-ever chinchilla — nibbled on seeds.

It was all part of the recent effort to transform the Johnsons Ghut shelter from a hurricane-gutted shell into an inviting space where volunteers and visitors can interact with animals one-on-one, and, staff and board members hope, find a new companion to take home.

The roof and walls, which were largely torn off by Irma, are freshly repaired and repainted, and volunteers built picnic tables out front for staff to relax. Stronger kennels have replaced the old crumbling ones.

“We want the community to understand that we want people to come in and see this,” explained board member Kirstie Palmer, who said the makeover took about a month in all. “We want people to see the animals and know what we’re doing, and to know that they can come in here any day, any time, and get some puppy love.”

It’s all part of a longer-term plan to revamp the way the society operates. That includes installing new computer software to keep track of each animal that is brought to the shelter, and cultivating closer relationships with local veterinarians and the organisation Promoting Animal Welfare, which funds the spaying and neutering of each animal.

“Thanks to PAW, no dog or cat leaves here without being spayed,” Ms. Palmer explained.

The long-term plan, however, remains the same as before Irma: relocating the shelter to a steel structure purchased in 2015 and located on an acre of land in Josiahs Bay. Since Irma put a temporary halt to that goal, the shelter is now playing catch-up. The organisation’s biggest challenge is obtaining donations and volunteers, who are needed to feed, walk, wash and spend time with the animals.

“Vijay [Bissoondutt] is our only full-time staff member,” said board member Nancy Woodfield-Pascoe.

“That just illustrates how important it is that we have volunteers we can rely on. If he gets sick or needs to leave, we need someone we can count on to be here.”

Always in sore need of supplies, the shelter has also partnered with charter boat companies in order to solicit donations by encouraging guests to leave beach towels behind at the end of their trip.

“They’ll leave them behind after their charter; we’ll launder them and give them to a kitten or a puppy,” Ms. Palmer said.

Guests are also encouraged to bring different types of supplies.

Meanwhile, the society plans to revive its popular gaming night fundraiser, which was suspended after Irma. According to manager Vijay Bissoondutt, the shelter’s dog population has swelled since Irma, from five last November to 52 as of Monday. That’s largely because PAW and other organizations are transporting fewer dogs off the island to the United States, where there’s a larger pool of people eager to adopt them.

“You can take your puppy as a carry-on,” Mr. Bissoondutt said. “It’s hard to take a bigger dog right now.”

Volunteers can help with that, too, by pitching in to help escort them.

New board member Els Kraakman — who works at the company GK Construction, which financed much of the shelter’s rebuild — has fostered 26 puppies over the years.

As puppies bounded around at her feet, she cradled the smallest pup at the shelter — a 7-week-old she has been fostering.

He will be flown to a new home in the United States next week.

“The fostering is the easy part,” she said. “Giving them up is hard every time.”

In the meantime, the current shelter will continue to replace cages and expand the facilities. Mr. Bissoondutt sees the facility playing an important educational role in the community.

“We rescue so many different animals; we take everything,” he said, adding that this list has included donkeys, monkeys and an emu.

A large osprey called the shelter home until last week, when it was relocated to Necker Island.

“Many local kids have never seen these types of animals before,” he said.

Ms. Kraakman said she was inspired to join and help fix the space after seeing shelter dogs who lacked adequate roofing during the recent rains.

“All these pups soaking wet, and I just looking here, like, this needs help,” she said. “Because we know all the funds of the Humane Society are going to the future, to the new building, it’s all about making this more workable for now.”