Local News > More students head back to class in person

More students head back to class in person

More students are filtering back into in-person classrooms under the phased approach to school re-openings that began in October as Covid-19 numbers fell, though some are still attending primarily or …

END_OF_DOCUMENT_TOKEN_TO_BE_REPLACED 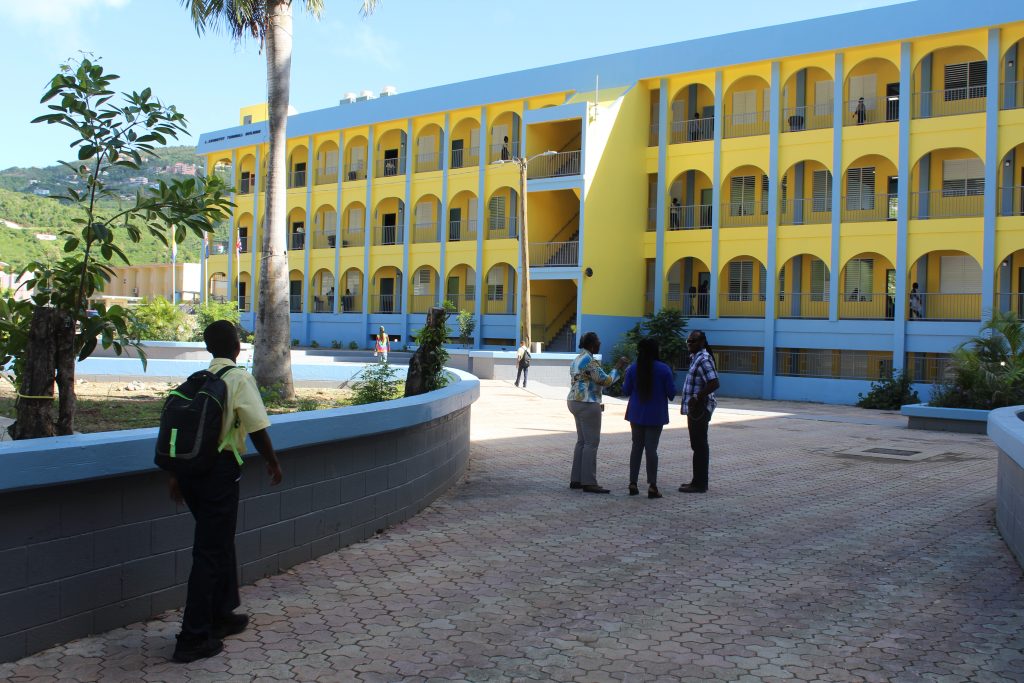 More students are filtering back into in-person classrooms under the phased approach to school re-openings that began in October as Covid-19 numbers fell, though some are still attending primarily or fully online, Deputy Premier Dr. Natalio “Sowande” Wheatley told the House of Assembly last Thursday.

“Classes were conducted on the majority of campuses for all schools utilising the phased approach,” said Dr. Wheatley, who is also the minister of education, culture, youth affairs, fisheries and agriculture.

“The schools that were re- opened complied with the health requirements, and they were all successful at meeting the inspection requirements,” the minister said last Thursday. “Principals coordinated the on-campus classes to ensure adhe ence to the six-feet social distancing requirement and hygiene protocols.”

That included extra hand-washing and sanitation stations, the control of visitors to campus, and the wearing of masks and face shields.

“Based on space availability and varying classroom sizes, students were assigned on-campus sessions for some days in the week and online instructions on the other days,” he continued. “Although this proved a bit challenging initially for parents, teachers and students, they quickly adjusted to the new normal pattern of school attendance.”

Schools had been poised to reopen following the initial outbreak last spring, but a spike in Covid-19 cases in August delayed the process.

A Cabinet decision to send some students back to school was announced Oct. 21, and on Nov. 9, students in grades three to six and 10 to 12 returned to classrooms.

Students in grades seven through nine remained exclusively online at the time, but this week they also returned to some in-person instruction.

Schools reopened on Monday using the hybrid learning approach that had been in place during the previous term, with some schools having made “slight adjustments to scheduling of contact hours to better accommodate students,” Dr. Wheatley explained last Thursday.

At the junior division of Elmore Stoutt High School, classes are being held online this week.

For next week, students will be given a schedule via email for on-campus contact sessions, according to the minister, who said this information will be communicated to parents via email.

“The junior school population is currently 779 students, so because of the numbers and the on-campus requirements for social distancing, students will still have the majority of classes online,” the minister said, adding that on-campus hours will cover mathematics, English and technical subjects.

Dr. Wheatley went on to describe how infrastructural works at some schools have limited the number of students who can be on campus.

As a result of the ongoing construction at Bregado Flax Educational Centre on Virgin Gorda, only technical, special education and “marginalised” students have been able to attend in person, he said.

That project is expected to be completed “early” this year, he added.

In May, government and the Recovery and Development Agency signed a $1.7million contract to rebuild two blocks of the educational centre, whose post-Hurricane Irma rebuild has been ongoing since September 2018.

“In the meantime, in order to ensure that students have some classroom instructional time, the ministry is seeking the use of the Cane Garden Bay Baptist Church hall for classes for the upcoming term,” he said, urging parents to have patience with periodic disruptions.

Dr. Wheatley added that organising teachers into collaborative planning teams “ensured parity across the system in all subjects and by grades” to adapt to the hybrid model of instruction.

Final exams for all primary school students were administered on campus to allow for proper supervision, and secondary schools employed examination methods like time limits and variation of the same tests administered to students within the same class.

“In some instances, individual oral presentations were used, having students make on-the- spot presentations before [the] camera. For the practical areas, there were set tasks assigned that would have illustrated the students’ mastery of the concepts taught,” he explained. “I am incredibly impressed with how parents, administrators, teachers, support staff and students have adapted to a challenging situation in the schools with a non- traditional format.”

Dr. Wheatley added that he was “pleased to say that some progress was made over the last term in the buildout of the internet infrastructure that should address the coverage on campus. During the course of this term, the mounting of Promethean [smart] boards in schools will continue. This will help with the
delivery of the lessons, accommodating students in class as well as those online.”

In addition, he described a “significant improvement” in the number of students using digital devices, including digital textbooks for students in grades seven to nine, who can now access the necessary application via their personal laptops.

The minister added that Education Week will still be held from March 7-13 as part of efforts to “regularise the activities of the school year to some sense of normalcy.”