Business > More townhouses to be added

More townhouses to be added

A $30 million expansion to add 120 extra slips to Nanny Cay Marina is moving ahead, and construction could begin in October, officials said.   Plans have been in the …

END_OF_DOCUMENT_TOKEN_TO_BE_REPLACED 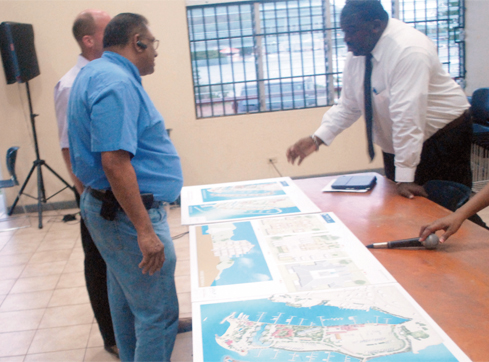 A $30 million expansion to add 120 extra slips to Nanny Cay Marina is moving ahead, and construction could begin in October, officials said.

Plans have been in the works since at least 2009 to expand the facility, which developer Cameron McColl said could add an additional 100 jobs to the area once the expansion is complete.

“We believe the economic effect will be substantial. We’re working hard to make Nanny Cay a centre of excellence in boats and the boat repair business, and we’re seeing more and more businesses seeking to be based there,” he said at a July 23 public meeting.

A 2012 master plan for the expansion called for a narrow breakwater to protect the slips, but amendments to that plan approved by the Town and Country Planning Department earlier this year will see the breakwater widened to 180 feet and becoming the site for several additional townhouse units. Miles Sutherland-Pilch, Nanny Cay’s general manager, said in an interview yesterday that the changes will offer additional protection during hurricane season, allowing the facility to become more of an “all-season marina.”

Mr. McColl said during the public meeting that he hopes the project can be complete ahead of the Charter Yacht Society’s 2015 Charter Yacht Show, which brings dozens of yachts and yacht brokers to the marina each year. He added that, besides additional townhouses, Nanny Cay will see more parking, additional cameras and enhanced security measures as part of the expansion. Additionally, as part of its development agreement with TCP, the marina plans to contribute to H. Lavity Stoutt Community College’s marine training programme, which Mr. McColl said would have far-reaching benefits.

“This is a venture that the community as a whole will benefit from as a result of this arrangement,” he said.  “What we’re trying to do, wherever possible, is to find training courses that are recognised elsewhere in the world, because these bring added value to participants.”