Local News > Movies return to the VI with Black Panther

Movies return to the VI with Black Panther

The second-floor concession is largely crumbled, and upstairs exposed heating ducts still sag from the open ceiling. On the top floor, the roof is still missing, without even a tarpaulin …

END_OF_DOCUMENT_TOKEN_TO_BE_REPLACED 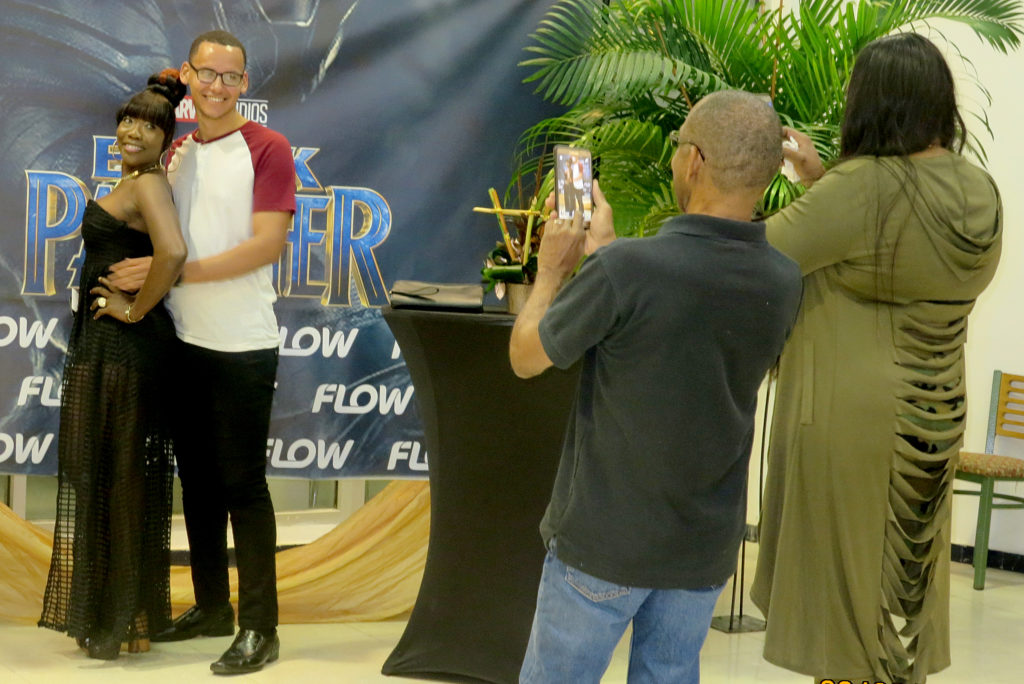 Moviegoers snap photos in front of a backdrop for Black Panther during the reopening of U.P.’s Cineplex on Friday. Photo: CLAIRE SHEFCHIK

The second-floor concession is largely crumbled, and upstairs exposed heating ducts still sag from the open ceiling. On the top floor, the roof is still missing, without even a tarpaulin to cover it up.

“We didn’t even get electricity back until December, and we didn’t get the extent of the damage until the lights came back on,” said Elton Leonard, owner of U.P.’s Cineplex in Road Town.

When he finally did see it, given the extent of the damage, he wasn’t expecting to reopen until May.

But then Black Panther came out, and everything changed.

“People were calling me up and asking for that movie,” he said. “It’s the biggest thing in the world right now. There was a huge demand for it.”

Mr. Leonard had to scramble to give the people what they wanted.

He admitted most of the repair work so far has just been temporary patching. The complex, which used to contain a bowling alley and skating rink, suffered damage from water and wind seeping in through smashed-out windows.

“Every time it rains, water keeps getting in and making it worse,” Mr. Leonard said.

But to patrons who packed the house for two showings of the film last Thursday night, none of that mattered.

The film, based on the Marvel comic, stars actor Chadwick Boseman as T’Challa, king of the fictional African kingdom of Wakanda, who must use his superpowers to defend his people.

It also features actors from around the Caribbean, including Guyana, the Bahamas, Grenada and Trinidad and Tobago. Black Panther is smashing box office records, having already reached the $1 billion mark worldwide, and is officially one of the top-grossing superhero films of all time. A sequel is already in the works.

Black Panther was the first big-screen film shown in the Virgin Islands since before Hurricane Irma, and Mr. Leonard marked the occasion with a cocktail reception for VIPs upstairs and an African-themed performance from the local Firebird Dancers troupe. Customers, some dressed in film-themed regalia, paraded in front of a giant movie backdrop, snapping selfies.

“We always like to do these big premieres whenever a movie opens,” Mr. Leonard said. “And since this is the first since the hurricane, it’s special.”

For the first time, he instituted an online ticket pre-ordering system.

“Normally, we don’t need to do that,” he explained. “Tortola is a small island and this cinema has a capacity that’s too big for it.”

But he said the tickets for Black Panther nearly sold out.

Stephane Smith and her boyfriend were among the first to buy tickets when they heard Black Panther was being shown. Since U.P.’s closed, they had missed the chance to catch up on current releases.

“We see all of the Marvel movies,” Ms. Smith said, adding, “We were about to buy tickets to go to St. Thomas and see it when we heard it was opening here.”

The two said they enjoyed the film because it was humorous as well as action-packed, and said that out of all the Marvel films, they’d rank it No. 2 behind last year’s Thor: Ragnarok.

The grand reopening Friday was only the first step in a series of big plans Mr. Leonard said he has in store for U.P.’s. In the next few days, he’ll usher in other audiences by showing the sequel 50 Shades Freed and the animated family film Coco. Coming attractions in April, May and June include Tomb Raider, Marvel’s Avengers: Infinity War and the Star Wars prequel Solo.

And it won’t stop there. Mr. Leonard said he hopes to reopen the bowling alley within the next few months, and then completely revamp the restaurant into a Chuck E. Cheese-type concept, complete with kid-friendly food and games, in order to attract more families.

In the meantime, despite the rush, he’s glad he chose to open when he did.

“Everybody’s enjoying it,” he said. “It’s getting great reviews.”