The National Bank of the Virgin Islands plans to offer “Fast Passes” to sister island residents so they can skip the normal lines while doing their banking on Tortola. NBVI …

END_OF_DOCUMENT_TOKEN_TO_BE_REPLACED 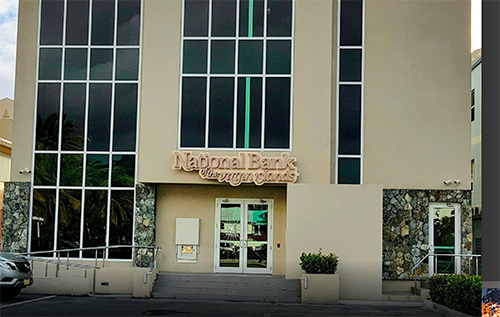 The National Bank of the Virgin Islands in Road Town. (File Photo)

The National Bank of the Virgin Islands plans to offer “Fast Passes” to sister island residents so they can skip the normal lines while doing their banking on Tortola.

NBVI decided to implement the idea after CEO Joy Francis visited Virgin Gorda, Jost Van Dyke and Anegada in April and quizzed residents about their needs.

“One of the most common complaints we heard from residents on all of our sister islands is the time spent in the bank as they also had so many other errands to run with limited time on Tortola,” Ms. Francis explained in a press release. “The Fast Pass addresses this issue and gives us a chance to serve our sister island clients better.”

The announcement comes after a series of banking woes on Virgin Gorda: In November, CIBC FirstCaribbean Bank announced that it was shuttering its VG branch, and in June Scotiabank announced it would close its VG branch by Sept. 1.

The pair of closures left the sister island without any on-the-ground banking services. Shortly after Scotia’s announcement, Premier Dr. Orlando Smith (R-at large) said that he spoke with NBVI Chairman Clarence Faulkner about establishing a presence on Virgin Gorda.

“This bank is looking into this urgently,” Dr. Smith said. “I expect to be able to make an announcement very soon on this matter.”

The first batch of NBVI Fast Pass cards — which are personalised and non-transferable — have already been produced and will allow sister island residents to wait in a designated line at the Road Town branch, according to the press release.

Other sister island residents are encouraged to pick up their cards at the bank during normal operating hours of 8:45 a.m. to 3 p.m. Monday through Friday, the press release stated.