National Democratic Party Chairman Myron Walwyn stood before a lively crowd on Saturday night at Maria’s by the Sea and posed a series of questions. “Who was it that provided …

END_OF_DOCUMENT_TOKEN_TO_BE_REPLACED 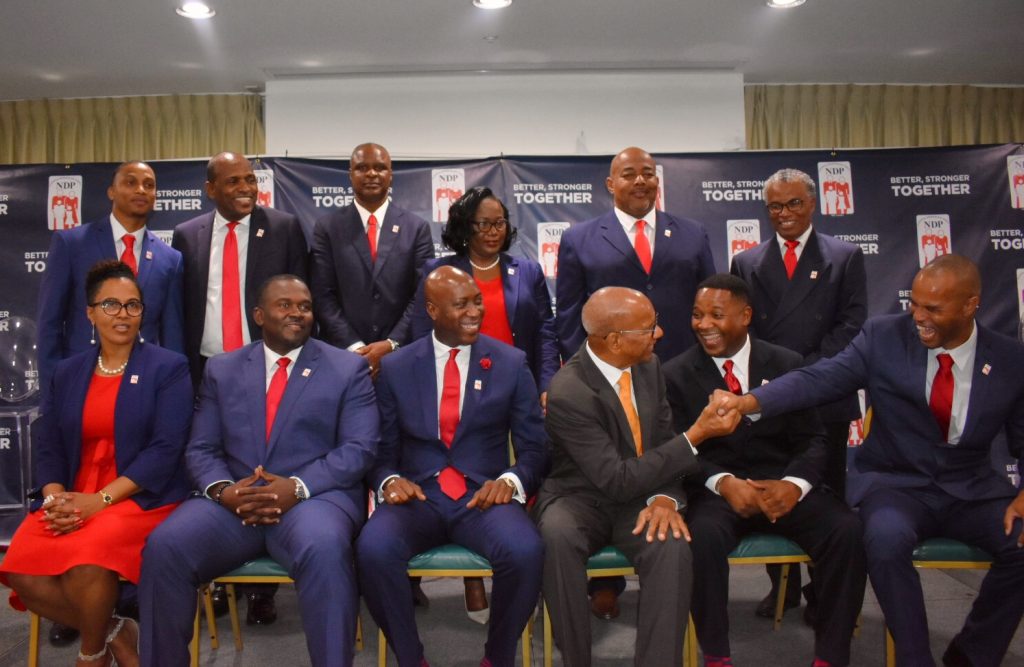 National Democratic Party Chairman Myron Walwyn stood before a lively crowd on Saturday night at Maria’s by the Sea and posed a series of questions.

“Who was it that provided you, the people of the Virgin Islands, with a world-class hospital?” he asked during the party’s candidate-launching ceremony.

“Who was it that provided universal health care for the people of these Virgin Islands?” asked Mr. Walwyn.

“Who was it that provided our children with technical and vocational education?”

The questions reflected NDP members’ contention that their record over the past two terms is a strong reason to vote them back into office at a time when their longtime leader is retiring and three former members have splintered off to form a new party.

In part because of the recent internal turmoil, fresh faces outnumber the NDP veterans on the candidate lineup, and five of them are making their first run for political office this year.

On Saturday the candidates were introduced after remarks from Mr. Walwyn and Premier Dr. Orlando Smith, the party president. One by one, four at-large and seven district contenders walked into the room as the crowd cheered in time to NDP theme songs.

Besides Mr. Walwyn, who will run at large again, four are incumbents defending their current seats in the House of Assembly: Communications and Works Minister Mark Vanterpool in the Fourth District; backbencher Alvera Maduro-Caines in the Sixth; Health and Social Development Minister Marlon Penn in the Eighth; and Dr. Hubert O’Neal in the Ninth.

Elvis “Juggy” Harrigan, who will run in the Fifth, is a former Virgin Islands Party backbencher, but the rest of the slate is composed of political newcomers: recording artist Aaron Parillon in the Third and businessman Hipolito Diego Penn in the Seventh, along with the three other at-large contenders: former Elmore Stoutt High School Principal Sandy Underhill, VI Festivals and Fairs Committee Chairman Trefor Grant, and former BVI Electricity Corporation Deputy General Manager Henry Creque.

The party did not name candidates for the First and Second districts, but Sachkia Barnes, a public relations consultant for Mr. Walwyn, confirmed that it will issue an announcement in the future if it decides to contest those seats.

During the event, which ran for about an hour and a half, biographies were read out and each candidate signed the party’s “Commitment of Service.”

Party members also touted the NDP’s accomplishments over past two terms, many of which were detailed in booklets distributed to attendees.

In his remarks, the premier highlighted the new Peebles Hospital and the cruise pier project, which he called one of the best “in the entire world.”

Mr. Walwyn, the education and culture minister, also praised Dr. Smith, who plans to retire from politics after about two decades heading the NDP.

“Doc, you don’t mind the noise,” he said. “You are the father of the modern-day Virgin Islands.”

He also assured Dr. Smith that he will not be “cast aside.”

“I will have you as an advisor, premier, because I know you know your job very well,” he said. “As the country is going through some difficult periods, … we’re going to need people who understand things, who know things — and who can calm me down [a] little bit, premier.”