“I am a descendant of the 25 free slaves of Nottingham Estate in 1776,” Hipolito “Diego” Penn announced in a booming voice on Tuesday night as he launched his bid …

END_OF_DOCUMENT_TOKEN_TO_BE_REPLACED 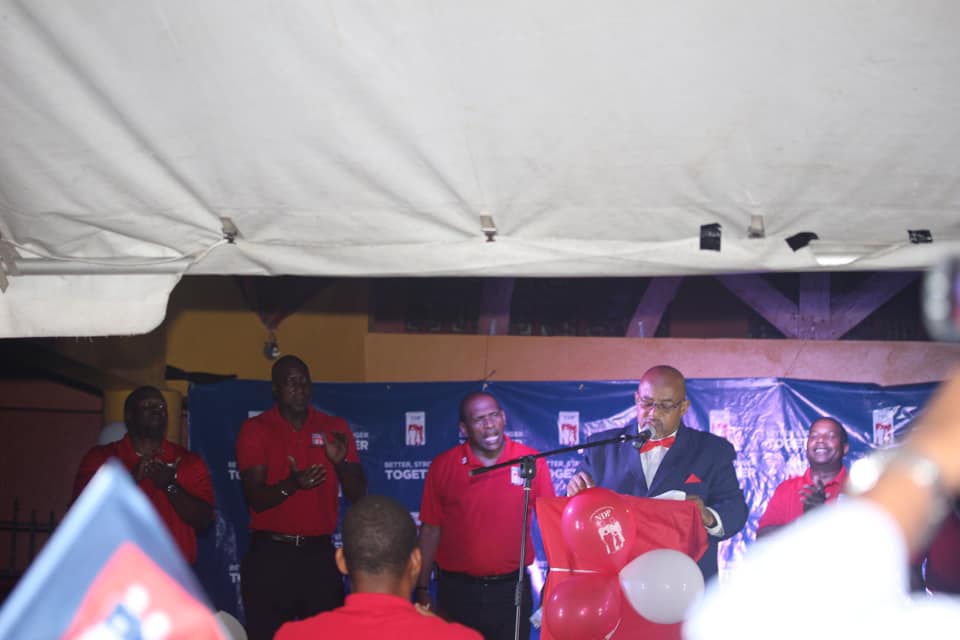 “If we don’t tell our own story, others will tell it in their own way,” said the National Democratic Party’s newcomer D-7 candidate Hipolito “Diego” Penn. (Photo: NDP / FACEBOOK)

“I am a descendant of the 25 free slaves of Nottingham Estate in 1776,” Hipolito “Diego” Penn announced in a booming voice on Tuesday night as he launched his bid for the Seventh District seat with the National Democratic Party. The reveal was the culmination of a long and detailed history of Mr. Penn’s genealogy, in which he listed members of his family dating back 250 years.“We’ve been free before everybody else,” he said during the launch, which was one of several NDP campaign events held over the past week. “We must guard our history with an iron fist and the eye of an eagle, because he who fails to remember his or her history is doomed to repeat it.”

The newcomer candidate — a businessman who is the owner and CEO of D&R Heavy Equipment Services — then segued into his support for heritage tourism. “If we don’t tell our own story, others will tell it in their own way, omitting what they feel like and adding what they want,” he said. It was the only personal information Mr. Penn shared in his speech, in which he otherwise preferred reciting long and detailed lists, oftentimes pulling papers off the podium to read from.

At one point he launched into an encyclopedic review of the months that various species of fish are in season before expressing his support for the fishing industry.He also put forth various educational fields and trades he believes should be taught in schools, such as livestock production, crop production, agricultural engineering, poultry farming, pig farming, fish farming and beekeeping.

On Saturday on Virgin Gorda, the NDP launched the campaign of Ninth District incumbent Dr. Hubert O’Neal, who detailed his plans to improve medical services, boat traffic, recreational facilities, and waste management on Virgin Gorda and Anegada. He also promised to introduce a medevac helicopter ambulance to provide rescue services to Virgin Gorda, Anegada, Jost Van Dyke and other islands, which he proposed could be done as a public-private partnership with a local entrepreneur.

His agenda, he said, also includes restarting a programme from 2015 in which the government issues Crown leases and low-interest mortgages to young families to help them buy homes.

As for Anegada, he touched on plans to make Setting Point an official point of entry so that charter boats can go directly there without stopping in Virgin Gorda or Tortola first. He added that there was already money allocated in the budget to construct a visitor centre complete with customs and immigration facilities.

In Virgin Gorda he pledged to rebuild the covered basketball court at the Anthonie “Jeffery” Caines Sports Arena and to expand the recreational grounds into a regulation-size soccer field and rubberised running track.

Mr. O’Neal also expressed desire to close the landfills in his district and stop the open-air burning of garbage, and to support recycling programmes. “Let’s get serious about modernised management of our waste,” he said, referencing local entrepreneurs who use recycled glass and cans to resell as goods. He added that he intends to support these emerging businesses and encourage their expansion to involve more people.

Additionally, he said, he plans to develop an eco-park to collect waste to be sorted for recycling and then use biodegradable elements to generate electricity. “Only then will Virgin Gorda and Anegada become truly green islands of the Caribbean,” he said.

Last Thursday Elvis “Juggy” Harrigan officially launched his candidacy for Fifth District representative at Huntums Gut basketball court, after unofficially announcing it at a rally two days before. During the event he spoke about his history of bringing development to the district through sports, including securing basketball scholarships for 12 students to study in the United States and securing an indoor basketball facility.

He affirmed that his top priority is restoring homes and businesses in the district, and restated his encouragement to parents to enlist their children in scouting and service groups.

He also touched on his plans to repair the Lester Smith bridge and to realign the road leading up to it, and his plan to restore the community centre in Long Trench, which was badly damaged in Hurricane Irma.

In an interview with 284 Media, Mr. Harrigan was asked about his plans for a community centre by interviewer Ronn Grant, who said that many existing community centres are underutilised. “Goats and sheep utilise them more than actual people,” Mr. Grant said.

Mr. Harrigan said he would designate specific functions for each room, like cooking, music, church and sleeping quarters for visiting basketball teams. He also outlined his plans to hire additional analysts in the Ministry of Finance to streamline the budget process as well as communication with other departments.

At-large candidate Trefor Grant and Third District candidate Aaron Parillon also did interviews with 284 Media, in which they were both asked the same three questions at the end about their stances on the legalisation of marijuana, gay marriage and abortion.

During a radio show on Monday evening on ZBVI, most of the NDP candidates discussed a wide variety of issues. Mr. Grant spoke on increasing funding to the National Business Bureau to train and incubate more small business owners, while Eighth District Candidate Marlon Penn suggested raising the cost of entrance at The Baths on Virgin Gorda from $3 to $10.