During a National Democratic Party rally on Tuesday night, Fifth District candidate Elvis “Juggy” Harrigan pointed out that supporters were gathered at the Fahie Hill Watch House, which he said …

END_OF_DOCUMENT_TOKEN_TO_BE_REPLACED 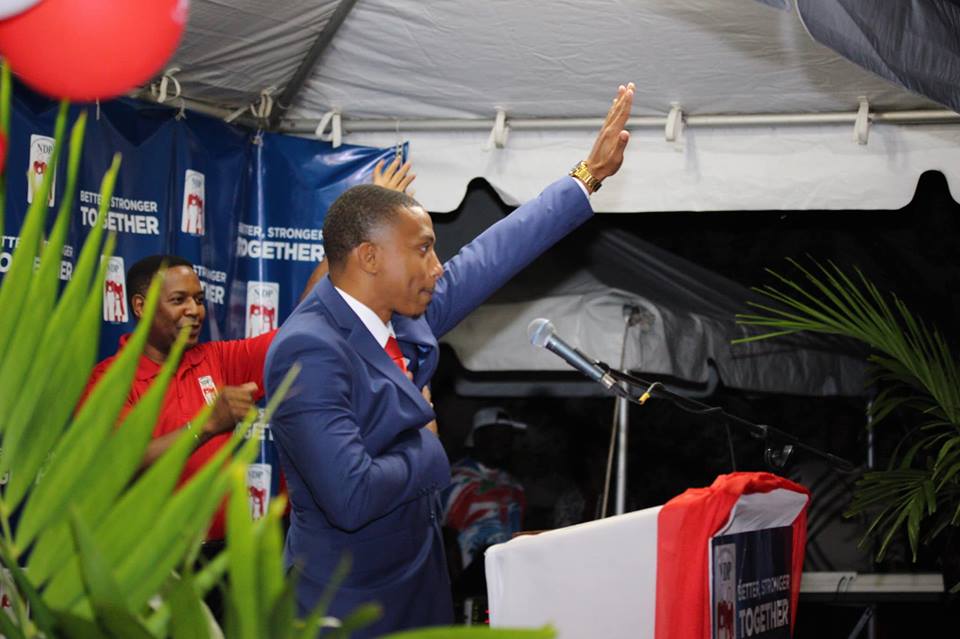 Third District candidate Aaron Parillon told supporters about his various goals for the community during an NDP campaign event over the weekend. (Photo: NDP / FACEBOOK)

During a National Democratic Party rally on Tuesday night, Fifth District candidate Elvis “Juggy” Harrigan pointed out that supporters were gathered at the Fahie Hill Watch House, which he said used to be merely a wooden structure with a dirt floor.

“Look at it now,” he said, gesturing to the open-air pavilion. “This was done by the NDP and the late Honourable Delores Christopher.”

Mr. Harrigan, a former Virgin Islands Party backbencher, said even more can be done in the area, including creating more lookout points along the Ridge Road. Other priorities include the restoration of homes and businesses in the district, and proper drainage and grooming of roadsides.

“There are still many persons still without roofs and suitable environments to lay their heads at night,” he said. “I will continue to assist to have these areas rectified as quickly as possible — given available resources and manpower.”

Towards the end of his remarks, rather than offering a political promise, Mr. Harrigan gave audience members a piece of advice instead: Enlist your children in scouting and service groups.

“And I want the parents to actually listen to me well, who have young children. My time back is not the same as now,” he said, describing his experience in various organisations. “Therefore, I would like to strongly suggest to parents today to encourage your children to join these organisations to build character, appreciation for community involvement, [and] personal development.”

A few days earlier, Third District contender Aaron “Da Jedi” Parillon was the first NDP candidate to take the stage at a launch in Sea Cows Bay. Almost immediately, he had party supporters on their feet.

“I have the strength to empower the youth. I have the strength to take care of our elders, who gave so much so Aaron can stand here tonight,” he said to cheers from the audience on Saturday. “Although I might not be able to get in touch with every single person in this district or voter or resident because of the time constraints, I just want you to know I am here for you.”

Mr. Parillon, a recording artist, told the public that he’s been active in the community through sports, cultural music and as an educator. Some of his political pledges include creating a district museum and providing consistent mentoring and counselling sessions for youth.

“We are not going to leave anyone behind. I am not going to leave one single man behind
— each and every one of you out there value to me,” he said. “We are going to work with our young people to address the issues they are facing and get them back on the right track.”

Some of Mr. Parillon’s other goals for the district include improving lighting in dark residential areas, resolving flooding and water issues, reengineering and reconstructing certain roads, and restoring historical sites.

Though the candidate has often been in the public eye for his work as an entertainer
and educator, Mr. Parillon faced a criminal charge years ago. He was found not guilty of unlawful sexual intercourse with a girl under the age of 16 by a unanimous High Court jury in 2011.

Mr. Parillon was a substitute teacher at the girl’s primary school and was accused of having sex with her in October 2008, when she was a 13-year-old high school student, Senior Crown Counsel Christilyn Benjamin said in her opening statement.

At the time, Mr. Parillon, who testified on his own behalf, denied ever having sex with the girl.