“We will not overpromise,” National Democratic Party Chairman Myron Walwyn said last week of the NDP’s newly released manifesto, which outlines policy proposals for the Virgin Islands as campaign season …

END_OF_DOCUMENT_TOKEN_TO_BE_REPLACED 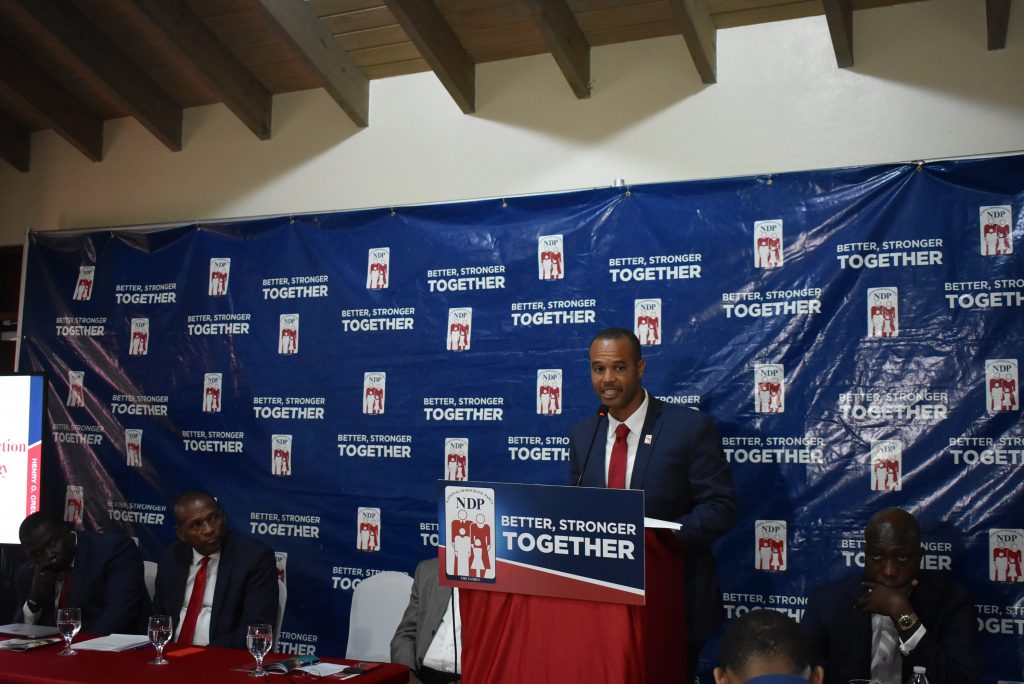 In the past week, the NDP has ramped up its activities, with six rallies, food, meet-and-greets and a district cleanup.

During a press conference in the packed Moorings conference room on Friday party members distributed a 43-page glossy booklet listing dozens of pledges in nine categories, including the economy, the environment and infrastructure.

“Our aim in every respect is to make the BVI better and stronger, a shining beacon of development in the Caribbean through a major process of transformation and modernisation,” Mr. Walwyn
said.

The promises include a commitment to expanding the Terrance B. Lettsome International Airport through a public-private partnership, as well as revitalising the terminal at Virgin Gorda’s Taddy Bay Airport.

The manifesto promises to implement a National Strategic Development Plan, which would set out a 10-year vision for the Virgin Islands, within the first year of being elected.

The document lays out plans to establish a Ministry of Tourism, to increase funding to the BVI Tourist Board, and to commission master plans for key tourism zones.

It also touches on proposed regulations for other facets of the economy like construction and small businesses. For example, it says contractors will be required to obtain “competency-based certification” and pledges to re-establish the Economic Advisory Council.

In regards to the environment, the manifesto details specific goals like reducing electrical generation by five percent each year for the next 20 years, and increasing the percentage of non-fossil-fuel powered vehicles and marine vessels to 10 percent by 2023.

The NDP is committed to becoming energy independent by 2039, at-large candidate Henry Creque, the former deputy director of the BVI Electricity Corporation, emphasised at the press conference.

The manifesto also mentioned proposals like a “Total Economic Valuation”of the environment, policies on marine estate administration and beach use, and transferring protected areas to the National Parks Trust.

The document states that the NDP “recognises that [these] actions are important.”

The party’s transparency and accountability pledges include freedom-of-information legislation, integrity legislation, establishing a ministerial code of conduct, and enforcing the register of legislators’ interests.

“We all came out of our houses heads bowed, wondering where else to go,” he said as he went on to tell a story of traveling to Anegada on a helicopter with Premier Dr. Orlando Smith.

The rumour at the time, he recalled, was that the entire population of the island had been wiped out.

“Never in the history of the Virgin Islands did they accomplish as much as the National Democratic Party government,” he said as he spoke admiringly of Dr. Smith and party leader Myron Walwyn.

As evidence of the NDP’s success, he pointed to the party’s handling of the hurricane recovery and the cruise pier’s boost to the economy.

On Friday at a rally at the Island Sizzle parking lot in Baughers Bay, Alvera Maduro-Caines predicted that a Sixth District fisherman’s wharf, her “flagship project” in her re-election campaign, would “reach national acclaim” within 10 years.

The wharf — which she said would be named for her Sixth District predecessor, the late Omar Hodge — would have green spaces for family gatherings and a modern dock.

She proposed that it would have an annual “fishermen’s jamboree” where district vendors sell fish and families could buy and cook it on the spot.

“This fisherman’s wharf is dear to my heart and I want it to remain local,” she said, adding that local companies would provide the professional services, marketing, clean-up and prep work.

At a Sunday rally in Cane Garden Bay, Mr. Walwyn encouraged voters in the Second District — where the NDP is not running a candidate — to vote for the party’s at-large candidates.

He said the district would benefit from the NDP’s efforts to boost cruise tourism and overnight visitors, and pledged to “unlock the potential”of Brewers Bay, which he said needs restroom facilities.

In addition to rallies in the First District and Greenland, other candidates also held outreach events, like Eighth District hopeful Marlon Penn’s “Meet & Mingle” at Hope Hill Lookout on Friday, and at-large candidate Trefor Grant’s “Tasty Saturday” event at the One Mart parking lot in Purcell.

Third District candidate Aaron Parillon held another clean-up, which was attended by several other NDP politicians.

Mr. Vanterpool expressed support for the decriminalisation of marijuana and abortion.

He stopped short of supporting the legalisation of gay marriage, an issue he said should be left to a referendum.

Mr. Walwyn reiterated his support for the decriminalisation of marijuana, citing Bermuda as an example of a territory that has decriminalised the possession of small quantities of marijuana.

On the issue of gay marriage, he said he personally supports it, but added that a referendum should be held before the territory changes the status quo.

“I am somebody who believes in people’s right to choose what they want to make them happy,” he said. “I know we live in a Christian society and the views might differ. It might change over time as a new generation comes in.”

He added that he supports the right to an abortion, citing the constitutional right to privacy.

He also defended his decision to award some 70 petty contracts to build the incomplete wall around Elmore Stoutt High School in 2014 and 2015, which as sharply criticised by the Office of the Auditor General.

“I prefer to feed 70 people than to feed one person,” he said.