“The Red Bay community and the East End waterfront is perfectly positioned to be the next business district in this territory,” Health and Social Development Minister Marlon Penn said to …

END_OF_DOCUMENT_TOKEN_TO_BE_REPLACED 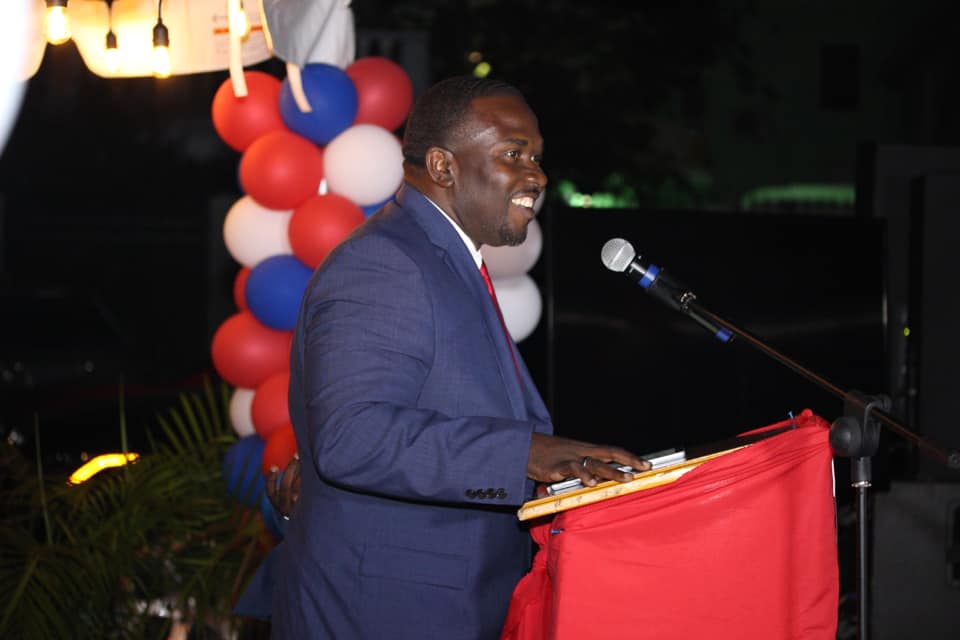 Marlon Penn proposed technology like cryptocurrency as a way to diversify the financial services industry during his eighth District re-election bid on Saturday. (Photo: NDP/FACEBOOK)

“The Red Bay community and the East End waterfront is perfectly positioned to be the next business district in this territory,” Health and Social Development Minister Marlon Penn said to applause on Saturday evening in Parham Town during a launch for his Eighth District re-election bid.

The ceremony was one of several National Democratic Party campaign events held over the past week, which also included a launch for Sixth District incumbent Alvera Maduro-Caines, a rally on Virgin Gorda and a road cleanup, among others.

Mr. Penn, who is running against Virgin Islands Party candidate Dean Fahie, went on to outline his vision for diversifying his district’s economy by boosting sports tourism — through a partnership with the BVI Football Association — as well as the fishing industry, heritage tourism and financial technology.

To encourage heritage tourism, he proposed activities like guided nature hikes and ATV tours to support an “ecofriendly tourism environment, providing many modern amenities, but with a slant towards embracing the natural ecology of this beach.”

Mr.Penn also touched on diversifying the financial services industry through financial technology, or “fintech,” such as cryptocurrency.

As an example, he pointed to Chad Lettsome, a VI native who founded a mobile payment startup “with the ultimate goal of transforming the BVI into a cashless society.”

Mr. Penn was appointed HSD minister in November after Premier Dr. Orlando Smith fired Ronnie Skelton over his plan to leave the NDP to form his own party, the Progressive VI Movement.

Ms. Maduro-Caines made similar points as Mr. Penn when she launched her Sixth District bid for re-election last Thursday near One Mart in Purcell, pushing heritage tourism as a way to boost the economy.

“I see craft vendors, but that is more than craft sales,” said Ms. Maduro-Caines, who recently was appointed junior minister for trade, investment promotion and consumer affairs, succeeding Mr. Penn when he became HSD minister.

“It is us selling the birthplace of freedom and the chance to stand where the free slaves once stood while enjoying the sunlight and brisk winds of Belle Vue.”

She also proposed restoring the historic Kingstown Church as a place where tourists can take part in an “authentic Virgin Islands church service,” as well as a programme to foster musical talent among young people.

In addition to the launches, the NDP held a meet-and-greet in Virgin Gorda for at-large candidate Trefor Grant and a rally for Ninth District candidate Dr. Hubert O’Neal at North Sound.

Third District candidate Aaron Parillon and his committee also did a road cleanup in the Sage Mountain area, and several candidates appeared on the NDP’s weekly radio show.

Both on that programme and during Mr. Penn’s launch, party leader Myron Walwyn, the minister of education and culture, poke at length about “law and order” and strengthening the penalties for gun-related crimes.

“If we have gun-related crimes coming on the rise, that threatens everything we’re trying to build,” he said on the radio.

At the Sixth District rally, Mr.Walwyn also expressed support for the decriminalisation of marijuana.

“Should we stunt the growth of a young man or young woman for having less than seven grams of marijuana in their possession? I say no,” he said, before outlining the potential harm of a criminal record.

“The damage to them in their personal and professional lives outweighs whatever damage their actions may have caused to society by smoking a simple joint.”

NDP candidates also continued to sit for interviews with 284 Media in recent days.

At-large newcomer Henry Creque expressed support for decriminalisation of marijuana as well as legalisation of gay marriage and abortion.

“Women have to have the right to choose,” he said.

At-large contender Sandy Harrigan-Underhill also appeared on 284 Media, where she discussed the challenges of being a woman on the campaign trail and perceptions that she’s condescending.

“I think sometimes we get the word condescending mixed up with confidence: someone who’s strong,” she said. “Especially for a woman. I’m a strong woman and I don’t apologise for it.”

She went on to say that many criticisms of her stem from her gender.

“It scares people,” she said. “People look at you and sometimes they don’t even know why they don’t like you.”

Ms.Harrigan-Underhill said she faced the same dynamic as a school principal.

“You look a certain way and people expect you to act a certain way,” she said. “You can’t ask somebody to do a man’s job and then tell them every day they must act ‘like a lady.’ I don’t know what that means.”